By Patrick Reddington@federalbaseball Updated May 18, 2012, 2:02am EDT

• McCutchen pwns Nats; Goes Yard Again: Pittsburgh left fielder Jose Tabata couldn't hold up though he tried to pull the bat back as an 80 mph 1-2 curve from Washington Nationals' right-hander Jordan Zimmermann fell into the dirt behind home plate. Check-swing K to start things tonight in the Nats' right-hander's eighth outing of 2012. Pirates' second baseman Neil Walker got a 1-2 curve too after Zimmermann missed with a 95 mph 0-2 fastball down low and Walker K'd swinging at the two-strike bender for the second out of the top of the first. Two quick outs, both swinging, on nine pitches, but Pirates' center fielder Andrew McCutchen can't be stopped...

McCutchen, who entered the game with 36 hits, six doubles, two triples, eight home runs and a .439/.505/.854 career line in 22 games and 82 career at bats against the Nationals, took a 96 mph 1-1 fastball outside from Zimmermann all the way the other way for an opposite field solo HR into the Nationals' bullpen that made it 1-0 Pittsburgh after a half inning in Nats Park. Zimmermann finished up an 18-pitch inning when Pedro Alvarez grounded weakly to first, but the Nationals already trailed by one and they were facing a pitcher who wouldn't give up much through the first six innings tonight...

• McDonald vs Zimmermann: Another weak grounder to first started the Pirates' second, after Bucs' right-hander James McDonald set the Nats' hitters down in order in the bottom of the first. Jordan Zimmermann got Garrett Jones to roll out no.1 of the top of the frame to Adam LaRoche with a 2-2 bender, then popped Casey McGehee up to center for a quick second out with a 94 mph 1-1 four-seamer before giving up a two-out single through short by Rod Barajas on a full-count slider outside. Zimmermann walked off the mound as a 2-2 curve to Pirates' third baseman Josh Harrison dropped in, but home plate umpire Alan Porter thought it was high. Harrison, of course, lined a full-count slider to center on the next pitch, but the opposing pitcher rolled a swinging bunt to first where Adam LaRoche fielded it and stepped on the bag for the third out of a 23-pitch second by Jordan Zimmermann.

Pirates' right-hander James McDonald struck out five of the first six batters he faced, including Adam LaRoche, Bryce Harper and Danny Espinosa in the bottom of the second. A 15-pitch inning had the 27-year-old right-hander through two on 30 pitches. Zimmermann got a weak grounder to second from Jose Tabata on the second pitch of the third, then gave up a one-out single on a 94 mph full-count four-seamer to Neil Walker. Andrew McCutchen just missed hitting his second home run in two at bats, pulling a slider all the way to left and just foul twenty rows deep in the left field stands. The Pirates' hard-hitting outfielder then hit into an inning-ending 6-4-3 to end a 15-pitch third, after which Zimmermann was up to 56 pitches.

• Two-Out Walk Hurts: McDonald collected K's six and seven in the third, as he retired batters seven, eight and nine in order in a nine-pitch inning that had the Pirates' starter at 39 pitches, 27 of them strikes through three perfect frames. Jordan ZImmermann started the fourth behind 3-0 on Pedro Alvarez, who helped the Nats' starter out, flying to left on the 3-0 offering, and the Nats' right-hander had two outs on eight pitches after he'd buried a slider inside to Casey McGehee for Zimmermann's fourth K of the evening. A two-out walk to Casey McGehee put a runner on for Rod Barajas, however, and the Pirates' catcher made the Nats' starter pay with a two-run HR to left on an 0-1 fastball. 3-0 Pirates after three and a half. James McDonald needed just 13 pitches to retire the Nationals in order in the fourth, collecting K's no. 8 and 9 in 4.0 innings. Jordan Zimmermann retired the Pirates in order on 14 pitches in the top of the fifth, but he was up to 87 pitches by the time he finished the inning.

• One Of Those Plays?: Andrew McCutchen jumped at the wall in center and even bobbled the ball before making a catch on a fly ball off Adam LaRoche's bat. First out of the fifth for Pirates' right-hander James McDonald. 13 in a row set down. Nats' right fielder Bryce Harper ended McDonald's run at a perfect game with a one-out walk, however, taking a close 3-2 four-seamer to give the Nats their first baserunner. Two outs later, the Pirates' starter was through five hitless with 10 K's on 69 pitches, stranding Harper at first. Jordan Zimmermann was up to 87 pitches when he started the sixth, and pitch no.88 got crushed. Andrew McCutchen took Zimmermann deeeeep to left and twenty rows back for his second home run of the night, his fifth of the year and his 10th in 23 career games against the Nationals. Zimmermann holds it there, completing a 20-pitch inning and his eighth outing of 2012 with 107 pitches on his arm.

• No No-No: James McDonald's perfect game ended in the fifth and his no-hit bid ended in the sixth when Jesus Flores took a hanging 1-2 slider to left field for a leadoff double and the Nationals' first hit of the night. Their second hit followed in the next at bat when pinch hitter Steve Lombardozzi lined to center and took second as Jose Tabata misplayed it. Two outs later, however, both runners were still at second and third, when Ryan Zimmerman ended the shutout bid with a two-out, two-run opposite field single to right that brought Flores and Lombardozzi around. 4-2 game. And Zimmerman takes second on an ill-advised throw home. After starting the inning working on a no-hitter, McDonald was then lifted after the next at bat, when Adam LaRoche tripled off the left field wall to bring Zimmerman home and make it a 4-3 game...

• Harp = Hero?: Bryce Harper had a chance to tie it, going to a full count with left-hander Tony Watson, but he popped up to the infield to end the bottom of the sixth inning in Nationals Park. Nats' right-hander Craig Stammen gave up a line drive double to left by Pirates' 3B Josh Harrison in the first at bat of the seventh. A sac bunt toward Ryan Zimmerman by Clint Barmes moved the runner over to third, and a one-out walk put runners on the corners for Neil Walker, who brought the Pirates' fifth run in when he grounded into a force at second but beat the double play throw to first. 5-3 Pirates after six and a half.

• Comeba... No: Danny Espinosa hit one into the left-center gap off Pirates' right-hander Juan Cruz to start the second, and though Jose Tabata got there he dropped it and the leadoff runner was standing at second in a two-run game. Rick Ankiel walked in the next at bat, and a sac bunt by Jesus Flores put both runners in scoring position for Steve Lombardozzi, but the Nats' 23-year-old infielder grounded weakly back to the mound for the second out of the inning, leaving it up to Ian Desmond to bring the runners in. Cruz (after numerous mound meetings) finally got Desmond to chase a 2-2 slider way outside and it was still 5-3 Pirates after seven innings in Nats Park.

• Goon Squad?: Pirates' right-hander Jason Grilli took over on the mound in the bottom of the eighth after an 8-pitch, 1-2-3 inning from Nats' lefty Sean Burnett, and Grilli walked Chad Tracy to start the Nationals' half of the inning. Ryan Zimmerman K'd looking at a 1-2 fastball in the next at bat, and Adam LaRoche flew out to center, so Tracy was still standing at first when Bryce Harper stepped in with two down. But the 19-year-old National flew out to center to strand Tracy at first three outs after he'd walked. Nats' right-hander Ryan Mattheus gave up two singles in the Pirates' ninth, but got a 2-5-3 inning-ending DP off Jose Tabata's bat to end the top of the frame.

• Gascanrahan: Former Nats' closer Joel Hanrahan issued a one-out walk to Rick Ankiel in the ninth, and Jesus Flores reached on an infield single over the mound that Neil Walker could only knock down. Runners on first and second with one out. Steve Lombardozzi popped out to Pedro Alvarez foul of third though, and Ian Desmond chased an 0-2 slider outside after back-to-back 96 and 98 mph fastballs. Strike three. Pirates win, 5-3 final. Nats denied another chance at a sweep. 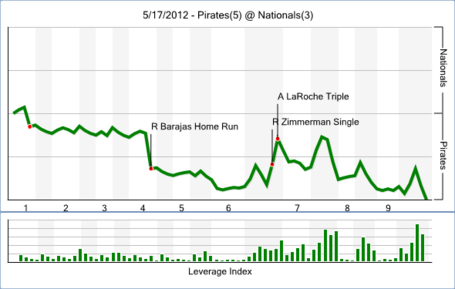