We now know when the Washington Nationals will get a chance to finally complete the three-game sweep of the Miami Marlins they started earlier this season. The finale of the Fish's three game series in D.C. was postponed by inclement weather on April 22nd. The Nationals, in an official press release this morning announced that the game will be played on August 3rd as part of a doubleheader:

"The April 22 Nationals-Marlins game at Nationals Park has been rescheduled as part of a traditional, single-admission doubleheader on Friday, August 3, with the first game beginning at 4:05 p.m. The second game will follow at 7:05 p.m. or later, depending on when the first game is completed.

This weekend it's Interleague action with the Nationals' neighbors to the north, the AL East's 1st Place Baltimore Orioles. [Checks standings again... That is correct, huh...] The 25-14 O's enter the weekend series in D.C. in the midst of a three-game winning streak. The Nationals are 23-15 after last night's loss. Will Natitude Park be overrun with O's fans? Will they all predictably scream "O" during the national anthem? Nats' skipper Davey Johnson, according to the Washington Post's Sarah Kogod, would prefer that you not scream, "O." You'll have to be in Nats Park this weekend to know. If you don't have tickets already, the folks at TiqIQ have once again provided us with some info and a link for tickets to this weekend's game... 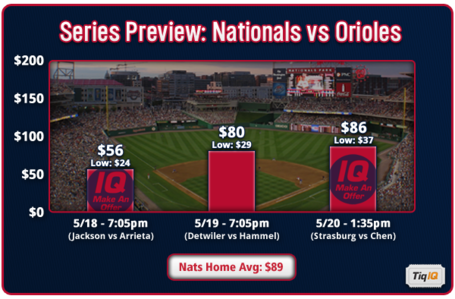 • Here's a link, take a look and see if you can find a deal on a ticket to the Nats/O's games this weekend. HERE.