By Patrick Reddington@federalbaseball Updated May 19, 2012, 1:40am EDT

• Heel Pop: Washington Nationals' starter Edwin Jackson went to a full count with each of the first two batters he faced tonight, walking Xavier Avery and popping up J.J. Hardy. The 28-year-old Nats' right-hander got behind the third batter too, Nick Markakis, who took a 94 mph 1-0 fastball to left-center for a one-out double to put runners on second and third with one down. Jackson got a swinging strike on the first pitch to O's outfielder Adam Jones, but the 26-year-old center fielder grounded back to the mound on an 0-1 slider, off Jackson's heel and straight up into the air for an unplayable RBI infield single that brought the leadoff walk around and made it 1-0 Orioles after an 18-pitch inning by E-Jax. After Jake Arrieta gave up a two-out single by Ryan Zimmerman and nothing else in the bottom of the first, Jackson came back out and struck out the side on 13 pitches, and Nats' outfielder Bryce Harper tried to get the offense rolling in the bottom of the second...

• Charlie Harper Hustle: The Nats' 19-year-old outfielder hustled out of the box on a slow roller to second, making O's second baseman Robert Andino rush and fumble the ball before tossing it away. Harper's given a single by the official scorer and he takes second on the error. A fly to center by Danny Espinosa allowed Harper to tag and take third, but two outs later he was stranded there when Rick Ankiel K'd and Jesus Flores flew out to right. 1-0 O's after two. E-Jax gave up a one-out double by O's outfielder Xavier Avery in the top of the third, but struck J.J. Hardy out with an 89 mph 2-2 slider and got help from Danny Espinosa on a sharp one-hopper to second off Markakis' bat. 18-pitch 3rd, for Edwin Jackson, still 1-0 O's. Ian Desmond singled with one down in the Nats' half of the frame, then stole second one out later with Zimmerman up, but Zim took a called strike three on a 92 mph 2-2 sinker and Jake Arrieta had three scoreless on 50 pitches.

• E-Jax Settles In: Edwin Jackson retired the O's in order in the fourth. The quick 10-pitch frame had the Nats' right-hander at 59 pitches, 38 of them strikes after 4.0 IP. Bryce Harper took a one-out walk in the Nationals' half, but was caught stealing with Danny Espinosa at the plate, and Arrieta got Espinosa looking with a 2-2 change for out no.3 in a 15-pitch inning. 1-0 O's after four. 7 K's already for Arrieta. E-Jax retired the side in order on seven pitches in the 5th, setting the eighth straight batter down. In the Nationals' half of the inning, Jesus Flores reached on a one-out high hopper back to the mound that Jake Arrieta couldn't barehand, but Flores was thrown out at second on an apparent blown hit-and-run with E-Jax up(?), and the Nats' pitcher K'd swinging for Arrieta's 8th K in 5.0 scoreless.

• E-Jax Pitches Around An E: Xavier Avery started the sixth with a single up the middle off E-Jax, breaking his string of batters retired, but Avery was forced out on a sharp grounder to third by J.J. Hardy. Danny Epsinosa tried to turn two on the play, but threw it by Adam LaRoche at first allowing Hardy to take a base. LaRoche came through with the glove work in the next at bat, however, fielding another sharp grounder off Nick Markakis' bat, and making the play at first as Hardy took third, then E-Jax threw an 87 mph 2-2 slider by a swinging Adam Jones, and it was still 1-0 after five and half. Two pitches later, it's a tie game...

• MONGOOSE RAWK: Arrieta got through five without giving up a run, but a 1-0 sinker to Ian Desmond ended up deep in the left field stands as the Nats' shortstop connected for a leadoff blast, his sixth of 2012. Tied at 1-1 in the bottom of the sixth inning, and Arrieta retires the next three batters in order to keep it that way. An 18-pitch inning has the O's right-hander at 92 pitches, 58 of them strikes after six in Nationals Park. After Desmond made it a brand new game, E-Jax went back out for the seventh and retired the Orioles in order on 11 pitches, to finish seven innings on just 89 pitches, collecting his seventh and eighth K's of the night in the process.

• Johnson, Nick Johnson: Bryce Harper started the Nationals' seventh with a leadoff single to center on a 1-0 change from the O's Arrieta. Danny Espinosa couldn't get a bunt down, but he was still trying in a 2-2 count when he rolled one foul down the first base line. One down. Rick Ankiel popped out to Wilson Betemit in foul territory off third. Two down. Jesus Flores popped out to foul territory behind first. The leadoff single by Harper was wasted. Former Nat, current O, Nick Johnson hit a one-out line drive single to right off Edwin Jackson in the Orioles' eighth, but E-Jax got a double play grounder out of Xavier Avery, and the 4-6-3 ended the top of the inning. Still tied at 1-1.

• Playing For Extras: O's sidewinder Darren O'Day took over in the eighth. Arrieta's line: 7.0 IP, 6 H, 1 R, 1 ER, 1 BB, 9 K's, 103 pitches, 66 strikes, 3/2 GO/FO. O'Day retired the Nationals in order on nine pitches. Nats' right-hander Tyler Clippard took over in the ninth, striking out the first two batters before Adam Jones reached on an infield single to short Desmond could only knock down. Matt Wieters got a grounder by Adam LaRoche at first in the next at bat, but Danny Espinosa got to it and Clippard got over in time to cover first and catch Espi's throw for the third out of the O's ninth. Still tied at 1-1 after eight and a half. O'Day came back out to face Ryan Zimmerman in the ninth, retiring the Nats' third baseman on a groundout to second. Right-hander Troy Patton took over from there, and a groundout by LaRoche and popout by Harper later this one was headed for extra innings.

• FREE BASEBALL!: Sean Burnett gave up a leadoff walk to light-hitting infielder Wilson Betemit, but got a potential 3-6-3 off Chris Davis' bat that Adam LaRoche mishandled. The Nats settle for the out at first, but there's a runner on second with one down. A 90 mph 1-2 fastball got Robert Andino swinging for out no.2. Burnett got behind Bill Hall, 3-0 and put the O's pinch hitter on, then struck Xavier Avery out to end the top of the 10th. O's right-hander Kevin Gregg took over in the bottom of the inning, hitting Danny Espinosa in the first at bat, but Rick Ankiel popped out and Jesus Flores hit into an inning-ending 4-6-3 to send this one to the 11th. Ryan Mattheus took over on the mound in the top of the inning, giving up a long fly to center by J.J. Hardy that Rick Ankiel tracked down in the first at bat. No one was tracking down Nick Markakis' fly to left, however, as the O's outfielder crushed a 2-2 cutter, taking it to the second deck above the right field bullpen for his 7th HR of the year and a 2-1 O's after 10 and a 1/2.

• 4 Outs?: O's RHP Pedro Strop hit Steve Lombardozzi to put the leadoff runner on, but after failing to get a bunt down, Ian Desmond groundedd sharply to first where Chris Davis started and ended a 3-6-3 DP. Roger Bernadina K'd swinging, but the wild pitch got by Matt Wieters to give the Nationals an extra out. Ryan Zimmerman... extends the inning with a two-out single. Adam LaRoche grounds back to the mound. Ballgame. 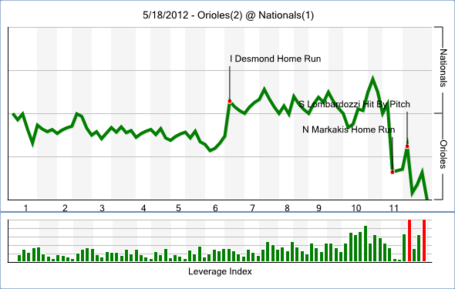