• New Look: "Just needed to shake it up a little bit," Washington Nationals' manager Davey Johnson said this afternoon when asked about the new-look lineup he put together for the second game of three with the visiting Baltimore Orioles in D.C. 23-year-old infielder Steve Lombardozzi was starting at second and leading off. Bryce Harper was back in the two-hole. Ian Desmond, who's led off in every game he's played this season, was hitting fifth. "I like the way the other lineup was put together," Johnson said, but he spoke to Desmond recently and decided the 26-year-old infielder didn't have to be locked into the leadoff spot and his shortstop agreed. "I felt like the offense is kind of sputtering," Johnson said, "And I'd just kind of mix it up and draw them out of a hat and throw them up on the wall."

The hope with Desmond, Johnson explained, was to put him in a run-producing spot. "He's driven in some big runs last year and this year hitting in the one-hole," the manager said, "His RBI numbers would be better if he was in a more run-producing role, but I swapped him out basically with [Bryce] Harper. I like Harper's energy in one or two, and getting him more at bats, and later in the ballgame [with Lombardozzi and Harper one and two], it just kind of begs the opposing [manager] to bring in a lefty to face those two guys. So this kind of breaks it up a little bit..."

"Sometimes when you're struggling a little bit," Johnson said, "change just kind of clears the air..."

• Zim Throws Home: Davey Johnson shook up the offense, but it was the Nationals' defense and their veteran third baseman, in particular, that made a difference in the first. After Roger Bernadina misplayed a line drive to left by J.J. Hardy, allowing the ball to get by him and roll to the left field wall as the O's infielder took third, Nick Markakis rolled a grounder toward third that Ryan Zimmerman fielded before throwing home to today's catcher, Carlos Maldonado, who applied the tag Hardy and more importantly avoided getting injured. Two-outs for Nats' starter Ross Detwiler, who gives up a single by Adam Jones, but gets Matt Wieters looking to end a 26-pitch opening frame.

• This Is Not The Det We Were Looking For: The Nationals went down in order on twelve pitches in the bottom of the first. O's first baseman Wilson Betemit started the second with a single up the middle off Ross Detwiler, who walked Xavier Avery after a sac bunt by Steve Tolleson to put two on with one out. A sac bunt by O's right-hander Jason Hammel put both runners in scoring position at second and third and a two-out single by Robert Andio brought them both home to put the Orioles up 2-0 on the Nats early. The nine pitch frame had Detwiler at 35 pitches total after two innings in Nats Park. J.J. Hardy started the third with another hit off Ross Detwiler, this one a single, but he was erased on a force at second when Nick Markakis grounded to short in the next AB. Adam Jones got all of a 93 mph 1-0 fastball though, and the 26-year-old O's outfielder hit a two-run blast to left to put the O's up 4-0 after three two and a half in Nats Park. Jones' 14th HR of 2012. A 13-pitch frame had Detwiler up to 48 pitches after three innings pitched.

• Markakis Again: Detwiler threw a quick nine-pitch fourth after the Nationals came up empty against the O's right-hander in the bottom of the third. Ryan Zimmerman singled with one down in the Nationals' fourth, but Hammel got the next two outs and was through four innings on 62 pitches. Nats' center fielder Rick Ankiel ran full-steam into the out-of-town scoreboard trying to catch a Robert Andino fly to center field in Orioles' fifth, but the Nats' center fielder couldn't come up with it and the O's leadoff runner was on second with a double to start the fifth. One out later, last night's Orioles' hero Nick Markakis made it a 6-0 game, taking a 93 mph 1-1 four-seamer to right and over the scoreboard for his 8th HR of 2012 and the eighth hit off Detwiler in 5.0 innings.

• Back-to-Back-to-Back: Roger Bernadina, pinch hitter Tyler Moore and Steve Lombardozzi hit back-to-back-to-back two-out singles off the O's right-hander Jason Hammel in the bottom of the fifth, with Lombo's hit bringing Bernadina in from second to get the Nats on the board. 6-1 game when Bernadina slides in safely ahead of the throw in from Markakis in right, but Bryce Harper couldn't keep the streak going, grounding out to first to end the fifth. Craig Stammen took over for Detwiler in the 6th...

• Comeback Pt. 1: Stammen gave up a one-out double by Xavier Avery in the Orioles' sixth, but struck out the side in a 14-pitch frame, after which Ryan Zimmerman collected his second hit of the night and the Nats' fifth off the O's starter with an opposite field leadoff double to right. Zim's 6th double of 2012. Adam LaRoche walked in the next at bat to put two on with no one out and Ian Desmond due up, but Desmond popped unproductively to center on the first pitch he saw. Rick Ankiel came through, however, with a one-out RBI double to center and off the base of the W.B. Mason sign in front of the Red Porch. Zimmerman scored easily, and Ankiel avoided the tag at second. Hammel is done for the night. Second and third with one down and former Nationals' right-hander Luis Ayala's on for the O's. Carlos Maldonado grounded out to short to bring the Nats' third run in and make it 6-3, and a Roger Bernadina RBI single to center made it 6-4, but Chad Tracy's attempt to tie it died in front of the track in right-center. F9, but a two-run game after six.

• #LomboLobby: Ryan Perry threw a quick 14-pitch top of the seventh, retiring Nick Markakis, Adam Jones and Matt Wieters in order to get the rallying Nationals back up at bat. Steve Lombardozzi collected his second hit in four at bats with a leadoff line drive single to left, but Bryce Harper flew to right and Ryan Zimmerman K'd swinging, so it was up to Adam LaRoche to keep the seventh inning alive. The Nats' first baseman worked the count full, but K'd swinging to strand Lombardozzi at first and keep it 6-4 Orioles after seven. Ryan Perry came back out for the eighth, and completed his second scoreless frame on eight pitches. 2.0 scoreless on 22 pitches for the former Tigers' right-hander.

• DESI!!: Ian Desmond took the first pitch of the Nats' eighth, a 92 mph two-seamer from Ayala, to the right field corner for an opposite field leadoff double. 12th two-bagger of 2012 for no.20, and that's all for Ayala. O's lefty Troy Patton took over on the mound against Nats' pinch hitter Xavier Nady, who battled in a nine-pitch at bat before grounding out to third. O's right-hander Pedro Strop came out next to face Carlos Maldonado. The Nats' backup backstop took a one-out walk, and Desmond took third on a Roger Bernadina fly ball to center, but Danny Espinosa lined out to left in a pinch hit appearance and the Orioles took their two-run lead into the ninth. Henry "Lightning" Rodriguez took the ball in the ninth, and completed a quick 13-pitch, 1-2-3 frame. O's closer Jim Johnson came out for the ninth against Lombardozzi, Harper and Zim. 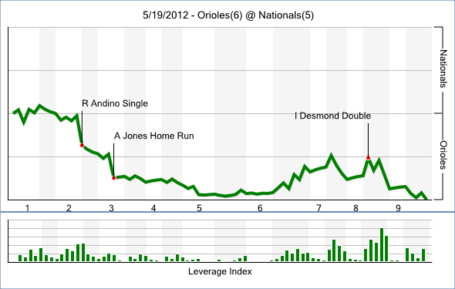