Washington Nationals Win On Ian Desmond's Walk-Off Blast. Bryce Harper 3 For 4 With Two Doubles In 5-4 Win Over The Arizona Diamondbacks.

Share All sharing options for: Washington Nationals Win On Ian Desmond's Walk-Off Blast. Bryce Harper 3 For 4 With Two Doubles In 5-4 Win Over The Arizona Diamondbacks.

• #LomboLobby: The Washington Nationals wasted a leadoff double by Ian Desmond in the first inning of tonight's game against the Arizona Diamondbacks, then Bryce Harper got picked off after collecting his first single in Nationals Park with two out in the second, and it looked like the Nats would fail to take advantage of another runner after a leadoff hit in the bottom of the third. Wilson Ramos singled to start the frame in front Edwin Jackson, but the Nats' right-hander struck out trying to bunt with two strikes and Ian Desmond flew out unproductively to left so Ramos was still standing on first base two outs after singling. Steve Lombardozzi came through, however, doubling to left to bring the Nats' catcher around and give the Nationals a rare, early 1-0 lead after three, but three pitches into the fourth it was a tied when Edwin Jackson left a 2-0 two-seamer up for Arizona's Justin Upton, who crushed it, sending a towering shot to center that Harper lost at the wall as it sailed over the fence. 1-1 game in the fourth...

Bryce Harper's arm's rep almost got Edwin Jackson out of trouble later on in a long top of the fourth. After Upton's HR tied it, E-Jax gave up back-to-back singles by Jason Kubel and Miguel Montero to put runners on the corners for Paul Goldschmidt. The D-Backs' first baseman lined to Harper in center on a potential sac fly, but Jason Kubel didn't even think about running, staying put at third as the Nats' 19-year-old outfielder fired a throw in to Wilson Ramos just up the third base line, but close enough to justify the D-Backs' third base coach's caution. A fly to Xavier Nady in the next at bat was deep enough, however, and no one's living in fear of Xavier Nady's arm, so Ryan Roberts managed to bring Kubel home to give the Diamondbacks a 2-1 lead after three and a half.

• 19? 19?: Harper worked back from an 0-2 count in his second at bat of the night against Joe Saunders, taking three straight breaking balls outside from the D-Backs' left-hander before doubling off the top of the out-of-town scoreboard in right to bring Danny Espinosa in after the Nats' second baseman had walked and stolen second. 2-2 game, and Harper's hustle puts the Nationals ahead as the 19-year-old upstart rounds third with abandon on a grounder to second that eats up D-Backs' infielder Aaron Hill and bounces into short-center. Just when it looked like Harper was dead to rights on the throw home, the hustling young outfielder knocked the ball away from catcher Miguel Montero as he slid in at home, then got back to the plate to touch it and score making it 3-2 Nats.

• BAREHANDS IT!!: Still 3-2 Nationals after five. Edwin Jackson walked Justin Upton to start the D-Backs' sixth, then got help from his center fielder again as Bryce Harper misjudged a sliced fly to center and almost overran it, stopping in his tracks and making a barehand catch as he fell in the outfield grass. Unbelievable. The Nats' right-hander couldn't escape the always-dangerous leadoff walk though, as Upton scored on a two-out double to right by Paul Goldschmidt, who crushed an 0-2 slider from E-Jax to bring Upton around and make it 3-3. Goldschmidt then scored himself on a Ryan Roberts single to left. Edwin Jackson's 27-pitch frame ends with the Nationals trailing 4-3. E-Jax is at 92 pitches, 58 of them strikes. Joe Saunders gave up a leadoff single by Adam LaRoche in the bottom of the sixth, but the Nats' big first baseman was caught trying to steal base no. 6 of his nine-year MLB career by the D-Backs' Miguel Montero, and two fly ball outs later, Saunders was through a nine-pitch frame and at 84 pitches total after six.

• Two On, 0 Outs And Nothing: Sidewinding D-Backs' right-hander Brad Ziegler: took over for Joe Saunders and recorded the last two outs of the seventh, but after issuing a leadoff walk to Steve Lombardozzi in the eighth, the reliever gave up an infield single on a high chopper toward third by Jayson Werth that Ryan Roberts fielded and just held onto. Two on, no outs. Still 4-3 Arizona. Diamondbacks' left-hander Craig Breslow replaced Ziegler, and got Adam LaRoche to fly to right for the first out of the inning, then Davey Johnson burned his backup catcher, sending the right-handed Jesus Flores up against the D-Backs' lefty. Flores K'd swinging, and Arizona left the left-hander in against Danny Espinosa, who K'd chasing from the right side on an 0-2 fastball up high. Two on, no outs and nothing. 4-3 D-Backs after eight.

• Harper Then Desmond: Bryce Harper hit the out-of-town scoreboard again on a leadoff double off D-Backs' closer J.J. Putz in the top of the ninth. Harper's second double of the game and the third of his career left the 19-year-old 3 for 4 on the night and standing at second with no one out in a 4-3 game. Wilson Ramos K'd swinging at 1-2 junk upstairs. Rick Ankiel K'd chasing another high heater for out no.2 and Ian Desmond came up with two down, and the Nationals shortstop hit a long fly to left-center...and... GONE!! GONE!! Walk-off HR by Ian Desmond. 5-4 Nats win. The five-game losing streak ends on a two-out walk-off blast. Desmond's 3rd. Harper doubles and Desmond brings him home with a two-run game-winning blast!! 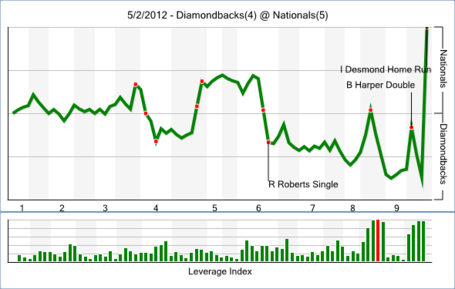