• Could the Nats salvage one after losing the first two games of the Battle of the Beltway?

• E:8 = 2 R, 0 ER: Back-to-back bad plays by the Nats' defense put runners on first and third in the second, with Bryce Harper dropping a fly to left-center off Wilson Betemit's bat and Adam LaRoche waiting for a grounder from Chris Davis before tossing too late to the covering pitcher at first. First and third with no one out and a Robert Andino groundout to second brings the Orioles' second run in, 2-0 O's when Betemit scores. A one-out walk to the backup catcher and a passed ball with the O's pitcher at bat put two runners in scoring position on second and third, and Xavier Avery dumped a two-out single into short left to bring the Orioles' third run of the game in. A 33-pitch frame ends with a swinging K by J.J. Hardy, but Strasburg's up to 49 pitches after just two innings on the mound in Nats Park.

• How Was He Waiting For That?: Wei-Yin Chen retired the Nationals' in order in a quick, 10-pitch bottom of the second. Strasburg needed 13 pitches to put the O's down in the third, then the Nats' right-hander picked up a bat and singled through second to start the home-half of the frame. Danny Espinosa tried to bunt the pitcher over unsuccessfully, then doubled by the third base line allowing Strasburg to go first-to-third to put two runners on with Bryce Harper due up. The Nats' 19-year-old outfielder worked the count full and then took a 69mph bender to right where Nick Markakis made a nice diving effort but couldn't come up with the ball. Two runs score, Harper makes it around to third with his second triple of the year and it's a 3-2 game in the third. After Ryan Zimmerman K'd swinging, Adam LaRoche walked with one down to bring Ian Desmond up with runners on the corners, and Desmond hustled down the line to beat a DP throw to first on a grounder to second as Harper scored from third. Tied at 3-3 after three innings in D.C.

• DIY: Stephen Strasburg threw a 16-pitch, 1-2-3 fourth, striking out two for K's from five of the last seven batters he'd faced, all of whom he'd retired since giving up the two-out single by Xavier Avery in the O's second. Wei-Yin Chen struck the first two batters out in the Nationals' fourth, but Jesus Flores got a hold of a 2-2 change and powered it out to right and over the out-of-town scoreboard for an opposite field solo HR, the Nats' catcher's first of 2012. 4-3 Nationals. Three pitches later, Stephen Strasburg took a 75 mph 0-2 curve from Chen deeeeeeeep to left and into the visitor's bullpen for his first career HR and a 5-4 lead. The crowd demanded it and Strasburg came back out for a curtain call. After his first career HR, (Did I mention it was his first?) Strasburg returned to the mound and set batters 8-9-10 in a row down with a 12-pitch, 1-2-3 5th.

• Scared Of LaRoche? Not Scared Of Desmond?: A hard-hit grounder to second off Bryce Harper's bat ate up O's infielder Robert Andino for a leadoff single in the Nationals' fifth. After Ryan Zimmerman popped out foul of first, Adam LaRoche walked for the third time in 3 AB's today. Ian Desmond, who flew out with two on in the first, and grounded out to bring in a run with two on in the third after LaRoche had walked in front of him twice, made the Orioles pay for the third disrespectful walk, singling up the middle to bring Harper around and make it a 6-3 game in the nation's capital, ending Wei-Yin Chen's day. O's right-hander Darren O'Day came on in relief and retired Xavier Nady and Rick Ankiel to strand two runners, and with Strasburg up to 90 pitches after 5.0 IP, Nats' skipper Davey Johnson went to the bullpen.

• Stras + Gorzo = 15-In-A-Row: Tom Gorzelanny took over for Strasburg in the sixth, retiring the Orioles in order on 17 pitches to set 13-straight runners down, continuing Strasburg's streak. In his second inning of work in the seventh, after the bottom of the Nats' order went 1-2-3 vs O'Day, the Nats' left-handed reliever set the first two runner down for 15-straight Orioles' retired before issuing a two-out walk to the O's back-up backstop Luis Exposito. O's pinch hitter Bill Hall fouled off three two-strike pitches, but eventually K'd to end the seventh as the Nationals retired 16 of 17 to hold the 6-3 lead through six and a half.

• Slow Crawl To Finish: Ryan Zimmerman (2 for 4) hit a one-out single in the Nationals' seventh, then took third on an Ian Desmond (2 for 4) double off the base of the right field wall, but Orioles' lefty Dana Eveland walked Xavier Nady to load the bases with two down for Rick Ankiel, who flew out to right to end the seventh. Still 6-3 Nationals. Nats' right-hander Tyler Clippard took over on the mound in the eighth, and threw a 14-pitch, 9-strike, 1-2-3 inning against the O's. Steve Lombardozzi took the first pitch he saw from Eveland to left for a one-out pinch hit single in the Nationals' eighth, after which "Right Side" Danny Espinosa showed the O's pitcher where the Red Porch seats are with a two-run HR to center and just over the W.B. Mason sign. Espinosa's 4th, 8-3 Nationals. Ryan Zimmerman hit into what looked like a 4-6-3, but an E on the O's allowed Harper to take third and put runners on the corners for Adam LaRoche, who flew deep enough to center to bring Harper home. 9-3 Nats after eight.

• FINISH THEM: Ryan Mattheus came on in the ninth to close things out, but gave up a leadoff single Adam Jones and a one-out single by Chris Davis to put runners on the corners. Mattheus walked Robert Andino to load the bases with one down, but got a 6-4-3 DP to end a 27-pitch inning as the Nats salvaged the series finale with the Baltimore Orioles. 9-3 final. 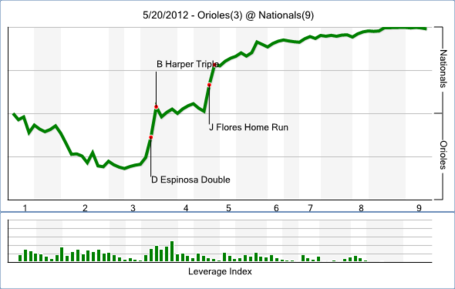