• Kennedy's Streak Started in D.C.: 27-year-old former New York Yankees' 1st Round pick Ian Kennedy brought a nine-game win-streak and a twelve-game unbeaten streak into Nationals Park tonight, as the Arizona D-Backs' right-hander tried to avoid taking a loss for the first time since last August 18 in Philadelphia. Kennedy's (9-0) since then, (3-0) in five starts this season, with the Diamondbacks 10-2 when he's taken the hill. According to MLB.com's Tyler Emerick's calculations, the Huntington Beach, CA-born, USC-educated, sixth-year pro has a 2.34 ERA with 16 walks (1.78 BB/9) and 79 K's (8.81 K/9) in 80.2 IP over that stretch. The Diamondbacks' starter's unbeaten streak started with Kennedy's 7.0-shutout inning outing against the Nats last August 23rd in the nation's capital. Nationals' skipper Davey Johnson told reporters this afternoon, as quoted on Twitter by MASNSports.com's Dan Kolko, that he was concerned about how his struggling offense would fare in tonight's series finale, explaining that Kennedy "'... went through us last year like a hot knife through butter.'"

Kennedy would make another strong start tonight in the nation's capital, but his unbeaten streak would end at the hands of a certain 19-year-old Nats' outfielder...

• Harper Misses First: The D-Backs' starter had the first two outs of the bottom of the first tonight on four pitches before he threw away a swinging bunt by Bryce Harper, sending a throw from in front of the mound by Arizona first baseman Paul Goldschmidt. The Nats' 19-year-old outfielder took second on the error, but the D-Backs appealed, claiming that Harper hadn't touched the first base bag and the umpire agreed, punching Harper out to end the first inning in Washington tonight after just eight pitches, seven strikes by the Diamondbacks' hurler.

• +Range, +The Arm = Lead: Nats' shortstop Ian Desmond threw from deep in the hole on the left side of the infield to get D-Backs' outfielder Justin Upton at first, ending a 10-pitch, 1-2-3 opening frame by Nationals' lefty Ross Detwiler. After another 10-pitch 1-2-3 frame by the Nats' starter in the top of the second, Jayson Werth doubled on the first pitch from Ian Kennedy in the home-half of the frame, ripping a low liner by third for the game's first official baserunner. Danny Espinosa stepped in with two runners on after Chad Tracy took a five-pitch walk, but Espinosa K'd for the 31st time in 86 at bats this season. Werth and Tracy moved into scoring position on an Ian Kennedy balk, however, and Rick Ankiel's groundout to the right side of the infield brought the first run home with Werth scoring to make it 1-0 Nats.

• Detwiler Rolling: Given a one-run lead to work with, Ross Detwiler went out and retired the first two batters in the third on six pitches, popping Ryan Roberts up with an 0-2 curve before getting outfielder A.J. Pollock looking with a 94 mph 0-2 fastball. Detwiler then issued a two-out walk to the opposing pitcher. Eight of the first nine retired, and nine of ten when Detwiler pops Willie Bloomquist up to end the top of the third after 14 pitches. 34 total after three. Seven pitches later, Detwiler was back on the mound, where he missed with a 93 mph full-count fastball inside to walk the second batter of the game and the leadoff batter in the fourth, Aaron Hill. Justin Upton, Jason Kubel and Paul Goldschmidt all flew out in order, however, to leave Hill at first after a 21-pitch fourth by the Nats' starter.

Ian Kennedy popped Bryce Harper up with an 80 mph full-count change, got a fly to right from Werth and a weak grounder to first from Chad Tracy to end a quick 9-pitch, 1-2-3 4th. Ross Detwiler had one down in the fifth, after striking Miguel Montero out with an 0-2 fastball inside, when the Nats' lefty surrendered the first hit of the night on a Ryan Roberts' line drive single to left. Detwiler got a grounder to second and a 4-6-3 inning-ending DP off A.J. Pollock's bat and the left-hander was through 5.0 scoreless after a seven-pitch frame.

• STOP K'ING!!: Danny Espinosa K'd looking at a backdoor 2-2 bender from Ian Kennedy for his 32nd strikeout in 87 at bats this year and the first out of the Nationals' fifth. Ian Kennedy gave up a single by Rick Ankiel, who also stole second, but the D-Backs' right-hander retired the next two batters to end a 17-pitch inning. Still 1-0 Nats. Ross Detwiler started the sixth with a leadoff walk to Willie Bloomquist, just missing with a full-count fastball to give up his third free pass of the day, and D-Backs' infielder Aaron Hill made this one hurt, doubling by a diving Jayson Werth in right field to bring the tying run in with Arizona's second hit of the game. 1-1 in the 6th.

• Desmond's Officially Feeling It: One pitch into the Nationals' half of the sixth, Ian Desmond was standing on second after ripping a leadoff double to left on a first-pitch change from D-Backs' starter Ian Kennedy. Steve Lombardozzi bunted Desmond over to third in front of Bryce Harper, who connected with an 0-1 fastball for an opposite field RBI double to left to bring Desmond in and give the Nats back their lead. 2-1 Nationals after six on Harper's fourth double in five games. Harper kept hustling, taking third base on a groundout to third by Jayson Werth, but a fly to left by Chad Tracy stranded the aggressive Nats' outfield there.

Paul Goldschmidt collected the D-Backs' third hit of the night off Ross Detwiler with a leadoff single in the top of the seventh. After the Nats' left-hander shattered Miguel Montero's bat on a groundout to second, Nationals' manager Davey Johnson turned to the pen, bringing Ryan Mattheus in with one down and a runner on second.

Diamondbacks' third baseman Ryan Roberts flew out to right to end a nine-pitch at bat against the Nats' right-handed reliever, and Mattheus struck Arizona outfielder A.J. Pollock out with a 1-2 fastball inside to end the top of the seventh with the score still 2-1 Nats.

Ian Kennedy retired the Nats in order in the seventh on 14 pitches, ending his night after 7.0 IP over which he gave up just four hits, two runs, both earned and a walk while striking out four on 83 pitches. Tyler Clippard took over for the Nats in the eighth, retiring the D-Backs in order in a 13-pitch, 1-2-3 frame. Ian Desmond walked with one down in the Nationals' eighth, but Arizona reliever Bryan Shaw got a double play grounder from Steve Lombardozzi to end the bottom of the inning. 2-1 Nats after eight. Henry "Lightning" Rodriguez came on in the ninth with Justin Upton, Jason Kubel and Paul Goldschmidt due up. Upton flew out to center. ONE!! Kubel flew out to center. TWO!!! And Paul Goldschmidt flew to right, 1-2-3 the Nationals win!! Two in a row. 2-1 final and another series win. Detwiler gets the curly-W. Kennedy takes the loss. Bryce Harper's RBI double is the difference. 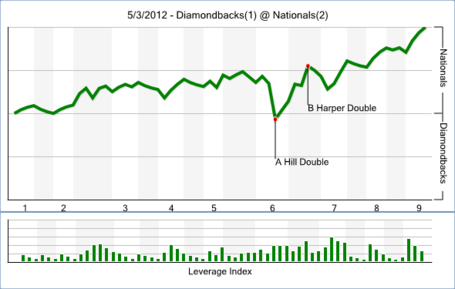