By Patrick Reddington@federalbaseball Updated May 5, 2012, 1:01am EDT

Share All sharing options for: Washington Nationals Win 4-3 Over Philadelphia Phillies On Wilson Ramos' Walk-Off Single In The 11th.

• Natitude Park?: Amidst all the hype and bluster of the Washington Nationals' attempts to "Take Back" Nationals Park from the throngs of visiting Philadelphia Phillies fans, both Nats' skipper Davey Johnson and D.C. GM Mike Rizzo were honest in recent interviews about what they and the Nats likely know to be the truth. It's not going to happen through marketing campaigns. The Nats' GM told Philly.com's Bob Brookover as much in an article that ran today in advance of the Phillies' first visit to the nation's capital this weekend. "'My 'Take Back the Park' plan,'" Rizzo said, "'is proving that we can beat [the Phillies] to the point where [their fans] don't want to come [here] anymore and our fans are going to fill the park.'"

"What's going to sell tickets is if we win ballgames," Davey Johnson told reporters before tonight's game, "That's the way we're going to take this stadium back." Having Stephen Strasburg on the mound is another good way to draw fans to the park. The 23-year-old right-hander needed just eight pitches, seven of them strikes to retire the Phillies in order in the first, and after the Nats came up empty in spite of a one-out single by Steve Lombardozzi and a walk by Bryce Harper in the Nationals' half of the frame, the Nats' '09 no.1 overall pick pitched around an error to complete two scoreless on 28 pitches in his sixth start of 2012 and his first vs the Phillies since he suffered the torn ulnar colateral ligament in his right elbow on the road in Philadelphia back in the summer of 2010...

• Werth vs Philadelphia: Chad Tracy reached on an error by Phillies' shortstop Jimmy Rollins, but was erased on a DP grounder and Rick Ankiel reached on a two-out single before he was caught stealing to end the second and bring Strasburg back to the mound. The Nats' right-hander needed just eight pitches to retire the Phillies in order in the third, then he picked up a bat and hit a one-out double to right to help his own cause. A two-out single by Steve Lombardozzi (2 for 2) moved Strasburg to third and Bryce Harper's second walk in two at bats loaded the bases for Jayson Werth, but the former Phillies' outfielder K'd swinging at a 2-2 sinker from Kyle Kendrick to leave them loaded and keep it scoreless after three.

• A HR? Off Strasburg?: Juan Pierre ended any hope of a no-hitter with a leadoff single back up the middle to start the top of the fourth, and one out later Hunter Pence ended any hope of a shutout with two-run blast into the Red Porch seats for the first HR off Strasburg since August 15, 2010 when then-Arizona D-Backs' first baseman Adam LaRoche took his current teammate deep here in Nationals Park. 47 pitches for Strasburg after four and Chad Tracy cuts the Phillies' lead in half with a solo bast to right on an 80 mph 1-2 slider from Kendrick to start the bottom of the frame. Tracy's first. 2-1 Phillies. Danny Espinosa and Rick Ankiel followed with back-to-back singles to put two on with no one out, but Kendrick pitched out of trouble, retiring the next three batters in order to leave runners stranded on first and third.

• 2 HR's Off Stras: An inning after Stephen Strasburg surrendered his first home run in two years, Phillies' catcher Carlos Ruiz ran into a 96 mph 0-1 fastball and sent a fly ball out to center, over Rick Ankiel and the center field wall for HR no. 2 of the night and a 3-1 Phillies' lead. A 13-pitch fifth had Strasburg at 60 pitches total after four and a half innings in Nats Park. After a 12-pitch, 1-2-3 fifth by Kyle Kendrick, Strasburg was back up on the hill, where he issued his first walk of the game to leadoff man Juan Pierre after a seven-pitch battle. Pierre got doubled up on a pop fly to right by Placido Polanco in the next at bat, however and Hunter Pence flew out to right field to end a 16-pitch sixth for the Nats' right-hander.

Kyle Kendrick allowed seven hits, one of them Tracy's HR, and two walks, but gave up just the one run in five innings of work against the Nationals before he was replaced in the sixth by left-handed reliever Joe Savery after having thrown 85 pitches, 52 of them strikes. The Phillies' lefty walked Danny Espinosa with one down and gave up an opposite field double by Rick Ankiel before he was lifted in favor of Jose Contreras. With runners on second and third, Jesus Flores hit one deep enough to center to bring Espinosa home and make it 3-2 Phillies with an RBI sac fly. Roger Bernadina got hit by Contreras in a pinch hit appearance, but Rick Ankiel overran third in the next at bat on what looked to be an infield single to short by Ian Desmond, and Jimmy Rollins threw to third to get Ankiel for the final out of the sixth instead of what would have been a bases loaded, two-out opportunity in a one-run game.

• Waiting For The Comeback: Tom Gorzelanny took over for Stephen Strasburg in the seventh, immediately surrendering a leadoff single by Shane Victorino and Gorzo then threw a pick attempt by Chad Tracy at first to put the speedy Phillies' outfielder on second with no one out. One out later, however, Victorino was caught trying to steal third just before Carlos Ruiz lined to right for what would have been an RBI single if not for the CS. Gorzelanny then pitched his way out of trouble, popping pinch hitter Freddy Galvis up to left to end the top of the inning.

Bryce Harper came up with one down in the 7th, having walked in each of his two previous at bats vs Kyle Kendrick. Left-handed Phillies' reliever Antonio Bastardo got up 0-2 on the 19-year-old outfielder though and got him on a check-swing strike three for just the third K in Harper's first 21 MLB PA's. A Jayson Werth fly to right later, Bastardo was through the seventh with the Phillies' one-run lead in tact. 3-2 Philadelphia after seven. An error by Nats' reliever Craig Stammen (the Nats' 3rd E tonight) put Phillies' outfielder John Mayberry, Jr. on, but Stammen stranded the leadoff man at third three outs later when he popped Hunter Pence up to right to end the top of the eighth. Still 3-2 Phillies.

• Chaditude!: Chad Tracy started the eighth with a single to right-center off Phillies' reliever Chad Qualls. A sac bunt by Danny Espinosa moved Tracy into scoring position, and an intentional walk to Rick Ankiel put two Nationals on. 10 hits and three walks for the Nats, but just two runs to show for it so far before Jesus Flores lines to left and John Mayberry makes an ill-advised attempt at a diving catch. The ball gets by the Phillies' left fielder and Chad Tracy scores from second to make it a 3-3 game. An intentional walk to Xavier Nady loaded the bases, giving the Phillies a force at any base, and a strong throw from short by Jimmy Rollins arrived home before Rick Ankiel could score on a grounder to short by Ian Desmond. Two down, but the bases were still loaded before a Lombardozzi groundout to second ended the eighth with the score tied at 3-3.

• Lightning Strikes: Henry Rodriguez walked Shane Victorino on four pitches to start the ninth before striking out Ty Wiggington and Carlos Ruiz and popping Freddy Galvis up to end a 15-pitch top of the inning. Michael Schwimer took over for the Phillies in the ninth with Bryce Harper leading off, and the Phillies' right-hander threw a full-count cutter by the 19-year-old Nat for the first out of the inning. Jayson Werth then flew to left and Chad Tracy was robbed of extra bases by Shane Victorino, who made a leaping catch against the out-of-town scoreboard in right for the final out of the ninth.

• FREE BASEBALL!!: Tyler Clippard threw a 12-pitch, 1-2-3 top of the 10th and Nats' second baseman Danny Espinosa started the bottom of the inning with a single to center, but Phillies' righty Michael Schwimer struck Rick Ankiel out for the first out of the frame, Jesus Flores flew unproductively to left for out no. 2 and Espinosa got caught trying to steal second for the third out of the tenth with Tyler Moore at the plate. Still 3-3 after 10. Ryan Perry took over for Washington in the eleventh and threw a quick 15-pitch, 1-2-3 frame. Michael Schwimer, in his third inning of work, retired the first two batters on flies to center and left before Steve Lombardozzi snuck a two-out single by a diving Ty Wiggington at first to bring Bryce Harper to the plate. Harper worked the count full once again and took a two-out walk, leaving it up to Jayson Werth, who walked too. Bases loaded for Wilson Ramos, whose line drive single to center wins it! Walk-off single, 4-3 Nationals. 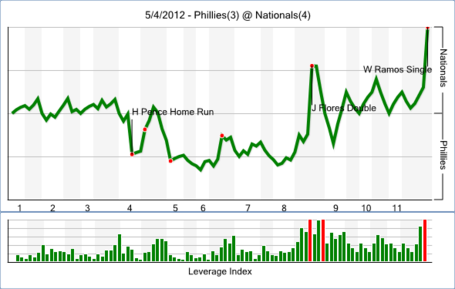