• NatGio: In two starts and 14.0 IP in Nationals Park before today's game, Washington Nationals' lefty Gio Gonzalez had yet to allow a run, giving up four hits and two walks while striking out 15 batters in outings against the Cincinnati Reds and Houston Astros. The 26-year-old left-hander, who spent his first four MLB seasons in the AL with the A's before the trade with Oakland this winter that brought him to the nation's capital, had never faced Philadelphia before this afternoon's start, but he made quick work of the Nats' NL East rivals in the first, retiring the Phillies in order in an 11-pitch frame that ended with Shane Victorino chasing a 3-2 change into the dirt.

After the Nationals wasted a two on, one-out opportunity in the bottom of the first, with Jayson Werth striking out looking and Chad Tracy flying out to center after a single by Steve Lombardozzi and a walk to Bryce Harper, Gonzalez was back on the mound, and up 0-2 on Hunter Pence when he surrendered a leadoff double to right by the Phillies' right fielder. Two outs later an error by Lombardozzi put runners on the corners with two down, but the Nats' lefty popped Phillies' second baseman Freddy Galvis up to short to complete a 21-pitch second and his 16th scoreless in Nationals Park to start the year...

After Phillies' right-hander Vance Worley pitched around a one-out single by Rick Ankiel to finish two scoreless on 34 pitches, Gio Gonzalez returned the mound and retired the Phillies in order on 15 pitches, collecting his third K in three scoreless and completing his 17th straight inning in Nationals Park without allowing a run. 47 pitches total, 33 strikes for Gonzalez through three. Steve Lombardozzi doubled to deep center for his second hit in two at bats with one down in the third, but the Nats' third baseman was doubled up on a Bryce Harper lineout to second that kept it scoreless through three.

• Gio's Scoreless Inning Streak Ends: Shane Victorino took an 0-1 change to left field and off the base of the bullpen wall 377ft from home for a leadoff double in the Phillies' fourth. A fly to deep center by Hunter Pence was deep enough for Victorino to take third, and a sac fly to right by Carlos Ruiz brought the Phillies' outfielder home for the first run of the year scored on Gio Gonzalez in Nationals Park. 1-0 Phillies in the fourth. The Nationals got a one-out double by Chad Tracy and a two-out infield single from Rick Ankiel in the bottom of the inning, but Worley once again worked out of trouble to complete four scoreless in D.C. on 54 pitches.

• DIY!!: Gio Gonzalez gave up a two-out double by Phillies' shortstop Jimmy Rollins, but nothing else in an 11-pitch 5th that had him at 78 pitches total through five, then the Nats' lefty worked the count full in a 10-pitch at bat against Vance Worley before Gonzalez ripped a leadoff double to right-center to start the Nationals' half of the fifth. Gonzalez took third on a groundout to short by Ian Desmond, sliding awkwardly over the base and Steve Lombardozzi walked with one down to put runners on the corners, but Bryce Harper's fly to left wasn't deep enough for Gio to score from third, so it was once again up to Jayson Werth, who crushed a 1-0 cutter from Worley, taking it deeeeeeeep to left for a three-run HR and a 3-1 Nationals' lead. Werth's 3rd silenced the out-of-town fans who'd heckled him all afternoon. Chad Tracy (2 for 3) and Danny Espinosa followed with back-to-back two-out singles and Rick Ankiel brought Tracy around with a line drive double to right, 4-1 Nats, but Danny Espinosa was thrown out at home for the third out of the inning. 4-1 Nationals after five.

• Desmond Does It Again: A 12-pitch, 1-2-3 sixth for Gio Gonzalez had the Nats' left-hander at 88 pitches and up 4-1 on the Phillies after five and a half. A solo shot to center by Ian Desmond in the Nationals' half of the frame made it a 5-1 game. Desmond crushed a 90 mph 0-1 two-seamer from Worley, sending it out over the 402ft sign on the center field wall for his fourth home run of the year and the Nats' second home run in two innings. 5-1 Nats after six. A two-out double by Phillies' infielder Freddy Galvis made Gio Gonzalez throw four extra pitches, but the Nationals' left-hander got pinch hitter Erik Kratz to chase a filthy 1-2 curve into third dirt and completed a 19-pitch inning with a four-run lead. Gio's done...
Gio Gonzalez's Line: 7.0 IP, 4 H, 1 R, 1 ER, 1 BB, 7 K's, 107 pitches, 77 strikes, 8/6 GO/FO.

• CHADITUDE!!!: Chad Tracy's third hit of the day came in the bottom of the seventh, when the Nats' bench bat and backup first baseman took Phillies' lefty Joe Savery deep to right and over the out-of-town scoreboard for a two-run HR after a one-out single by Jayson Werth. 3 for 4 with a double and a HR on the day for Tracy, who was 2 for 5 in last night's game. Nats' right-hander Ryan Mattheus threw a 10-pitch, 1-2-3 8th and after the Nationals come up empty in spite of singles by Tyler Moore and Lombardozzi, Mattheus comes back out for the ninth, gives up a leadoff single, but completes a scoreless ninth to guarantee the series win. 7-1 final.

15 hits, 7 runs, 3 home runs, what was it Davey Johnson was saying this morning about the offense coming around?

• Miss The Game? The DC Faithful (who weren't at the game or watching the Caps) Were Watching... 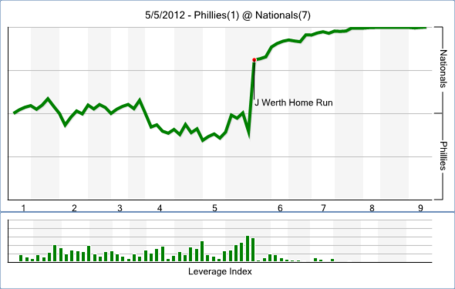