• Bryce Harper Steals Home!! Believe It!!: The only problem Jordan Zimmermann had in retiring the first three Phillies in order tonight came on a one-out bunt attempt by outfielder Juan Pierre. The Nats' 25-year-old right-hander dropped the ball, but picked it up in stride and tossed to first in time for the second out of what ended up being a six-pitch, five-strike 1-2-3 top of the frame. Phillies' lefty Cole Hamels retired the first two Nationals' batters he faced on seven pitches in the bottom of the first, then the 28-year-old starter hit Nats' rookie Bryce Harper in the backside with the first pitch he threw to the Nationals' '09 no.1 overall pick. The 93-mph fastball that clearly hit its target. Jayson Werth singled to left with two down in the next at bat, allowing Harper to hustle around from first-to-third™. With runners on the corners and Chad Tracy at the plate, Hamels checked Werth twice, and on the second throw over to first Harper broke from third and stole home ahead of Philly first baseman Laynce Nix's throw to catcher Carlos Ruiz. Holy ••••! Bryce Harper just stole home!! 1-0 Nationals...

• Zimmermann Gets Revenge!: With a rare early lead to work with, Nats' right-hander Jordan Zimmermann returned to the mound in the second and set Phillies no. 4-6 down in a 15-pitch, 1-2-3 frame. Hamels issued a one-out walk to Wilson Ramos in the Nats' second, but that was it and Jordan Zimmermann was quickly back on the mound in the top of the third, where he gave up the first hit of the night by the Phillies on a single up the middle by former National Pete Orr. Even with a runner on first, the Nationals' starter exacted revenge for the HBP on Bryce Harper, hitting the Hamels with a first-pitch fastball the first time he stepped to the plate and drawing warnings from home plate umpire Andy Fletcher. Two groundball outs later, Zimmermann escaped any trouble, completing a nine-pitch inning for his third scoreless frame. 30 pitches, 19 strikes through three in D.C.

• Under Pants: In his second at bat of the night after the HBP the first time around, Bryce Harper sliced a two-out single to left off Cole Hamels on an 0-1 fastball, but Jayson Werth K'd swinging to end the bottom of the third with Harper stranded at first. Still 1-0 Nationals. Jordan Zimmermann issued a five-pitch leadoff walk to Shane Victorino in the top of the fourth, and Phillies' outfielder Hunter Pence made him pay for it, taking a 93 mph 1-1 four-seamer to center field and over the fence into the Red Porch seats for a two-run HR and a 2-1 Phillies' lead. Pence's 5th HR of 2012 is just the second HR Zimmermann's surrendered in 37 innings this season. Laynce Nix followed with a single to right in the next at bat, and after a groundout to Danny Espinosa moved him into scoring position, the Phillies' first baseman scored from second on a one-out single to center by Placido Polanco to make it 3-1 Phillies after three and a half. And Jordan Zimmermann's at 59 pitches total after a 29-pitch frame.

• Dueling: Cole Hamels retired the Nationals in order on 17 pitches in the bottom of the fourth. Jordan Zimmermann erased a leadoff walk to Juan Pierre in the Phillies' fifth with a DP grounder off Shane Victorino's bat, and completed an eight-pitch frame when Hunter Pence grounded out to third to end the top of the inning. Ian Desmond connected with a 90 mph first-pitch fastball, driving it to left-center and off the base of the wall for a two-out triple in the Nationals' half of the inning, but Steve Lombardozzi rolled one weakly back to the mound to end the fourth scoreless frame by Cole Hamels after the Nationals scored in the bottom of the first. 80 pitches, 56 strikes for Hamels through five.

• Werth's Wrist: As if all the previous injuries the Nationals haven't been bad enough with Michael Morse, Drew Storen, Ryan Zimmerman and Adam LaRoche all missing time, after Jordan Zimmermann got the first two outs of the Phillies' sixth on eight pitches, Placido Polanco flew to shallow right and Jayson Werth charged in to make a sliding attempt, but the full force of his body came down on his wrist, bending it sickeningly back and leading to the right fielder leaving the game with his arm immobile and clutched close to his chest. The replays only made it look worse, especially for a player who's already had injury issues with his wrist nearly cost him his career. No updates were immediately available, but suffice it to say, it did not look good. 3-1 Phillies after six.

• Stammen vs Nix = Sliders Inside: The Werth injury and the 3-1 deficit really took the air out of Nationals Park and after a 13-pitch 6th, Jordan Zimmermann issued back-to-back walks to Cole Hamels and Jimmy Rollins to start the Phillies' seventh and Juan Pierre reached safely on a bunt single to load the bases with no one out, ending Zimmermann's night after 90 pitches, 48 strikes, six hits, three runs (three runners on are his, of course), four walks, 13 groundouts and two fly ball outs. 3-1 Phillies and the bases are loaded with no one out for Craig Stammen. Shane Victorino lined to left in the next at bat for out no.1 after a diving catch by Bryce Harper, and with Cole Hamels on third, there was no chance he was tagging up. Hunter Pence flew to right field, but Rick Ankiel ran over to make the catch and a strong throw in once again held the Phillies' pitcher at third. Two down. And Laynce Nix K's chasing the same sliders in the dirt inside he couldn't ever hit last year when he was a National. Bases loaded, 0 outs and Stammen pitches his way out of trouble.

• Things Fall Apart: An 0-2 change to Tyler Moore got the Nats' rookie outfielder swinging for the final out of the seventh, as Phillies' lefty Cole Hamels completed an eight-pitch, 1-2-3 inning. 99 pitches, 71 strikes for the Philly starter. Nats' lefty Sean Burnett took the mound in the eighth and retired the Phillies in order in an eight-pitch frame in his first inning of work since April 27th in LA. Bryce Harper sliced an 0-1 change from Cole Hamels to left, just out of Phillies' shortstop Jimmy Rollins reach, then the 19-year-old Harper hustled around first and took second on Juan Pierre's weak arm for a two-out double, but a groundout to second by Xavier Nady ended a 10-pitch eighth by the Phillies' lefty. Still 3-1 Phillies. Nats' right-hander Ryan Perry issued a leadoff walk to Jimmy Rollins in the top of the ninth. The Phillies' shortstop stole second with Juan Pierre up, and a single to center scored Rollins to make it 4-1 Phillies with one down. Make that 5-1 on a RBI triple by Shane Victorino. 7-1 on a two-run HR by Hunter Pence. No. 6 of the year. Ryan Perry let two more Phillies on with Carlos Ruiz singling and Placido Polanco doubling before the Nats' right-hander was lifted, and both runners scored with Tom Gorzelanny on the mound when Phillies' second baseman Freddy Galvis singled to center to make it 9-1.

• Shark! Shark! Shark!: Roger "The Shark" Bernadina added a pinch hit RBI double in the bottom of the ninth, made it a 9-2 game, and an RBI single by Ian Desmond made it 9-3, but that's how it ended. Nats take two of three from the Phillies, but lose the series finale. 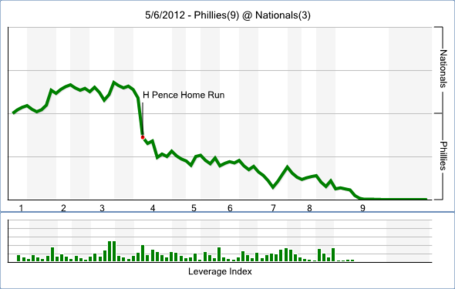 • Bonus Paragraphs: (ed. note - "This was the original opening to tonight's post game, but there's no way in the world Bryce Harper stealing home wasn't going to lead off this report."):

• +Natitude: 27-year-old Washington Nationals' third baseman Ryan Zimmerman was 23 the last time the Nats appeared on ESPN's Sunday Night Baseball back on March 30, 2008. The Face of the Nationals Franchise sent fans home happy that night, taking a 1-0 pitch from Atlanta Braves' reliever Peter Moylan deep to center field in the brand new Nationals Park for the fourth of eight walk-off home runs the '05 1st Round pick has hit for the franchise in his eight-year MLB career. Zimmerman wasn't in the lineup tonight, he's been sidelined since April 20th with right shoulder inflammation, but his BP session this afternoon were closely-watched and it appears like he'll be ready to return for the start of the next series on the road in Pittsburgh. The Nats' third baseman did make headlines tonight, however, telling reporters (including NatsInsider.com's Mark Zuckerman) before the finale of this weekend's three-game series with the Philadelphia Phillies which has drawn over 100,000 fans, that he doesn't blame fans for not turning out in these numbers in years past. "'I wouldn't have watched us a couple years ago, either. That's the truth. Nobody wants to watch a team that loses 100 games.'" The fans are starting to fill up the ballpark now, and as this weekend's series has proven, it's not just out-of-town fans making up for the small crowds anymore.

• Secret's Out: If they didn't realize it at the end of the 2011 campaign, the nation's capital's baseball fans are starting to realize now that the team the Nationals are fielding these days is different than what they've had previously and the national baseball media is catching on too. Nats' skipper Davey Johnson said as much in a press conference Saturday night when he talked about his team being in the national spotlight tonight. "I don't think it's a big secret," the 69-year-old manager said, "It's not a big secret among baseball [that] we've got a pretty good ballclub and have a lot of good players. It is going to be fun for everybody around to see a team from Washington that's atop the division playing the division champions. I would have interest in that even if I wasn't even in baseball. So it should be exciting. I don't have to give any motivational speeches tomorrow night, just like I didn't coming into the first game here."