• Bryce Harper's New Roles: Washington Nationals' manager Davey Johnson had Bryce Harper hitting in the two-hole and playing right for this evening's series-opening game against the Pittsburgh Pirates. Both roles were new ones for the Nats' 19-year-old 2010 no.1 overall pick. Harper started out hitting seventh when he was called up to make his MLB debut in LA a few weeks back, but the Nats' skipper moved him up to the three-hole with Ryan Zimmerman out of the lineup recently as the Nats' '05 1st Rounder dealt with shoulder issues, missing 14 games before finally returning to the field tonight. The Nationals' need was in left field when Harper was called up, but with the injury to Jayson Werth this weekend, the rookie outfielder was moved over to right where he'll likely stay until the Nats' $126M dollar outfielder is able to return from the broken left wrist he suffered on a sliding play in Sunday's series finale with the Phillies. The Nationals are asking a lot of Harper, who started just his ninth game in the majors tonight in PNC Park, but so far the preternaturally-gifted young hitter has shown an ability to handle everything that's been thrown at him... Even that 93 mph fastball by Philadelphia left-hander Cole Hamels. [ZING!]...

• WILLLLL-SON!!!!: Pirates' starter A.J. Burnett retired the first six Nationals he faced on 22 pitches, needing just eight pitches in the second to set the 4-5-and-6 batters in the Nats' lineup down in order. Nats' right-hander Edwin Jackson wasn't quite as efficient, giving up a double and a walk in a 21-pitch first (during which Roger Bernadina misplayed a fly to left into that "double"), but E-Jax needed just eleven pitches to retire the Pirates in order in the second, leaving him at 32 pitches total as he matched Pittsburgh's starter with two scoreless to start the three-game series in PNC Park. A.J. Burnett's 23rd pitch of the game was a 92 mph four-seam fastball to Nationals' backstop Wilson Ramos, and it ended up in the right-center stands as the Nats' 24-year-old catcher hit an oppo-boppo blast for his second HR of the year to give the Nationals an early 1-0 lead.

• Double Machine: Wilson Ramos took the first pitch of the third to right-center for an opposite field home run. After a six-pitch 1-2-3 bottom of the third by Edwin Jackson, who retired eight-straight following the one-out walk in the first, Bryce Harper hit his sixth double of the year to left field for an opposite field two-bagger on the first pitch A.J. Burnett threw in the fourth. Harper took third on a one-out single to right by Adam LaRoche (who was swinging 3-0) and scored on a two-out RBI hit by Rick Ankiel to make it 2-0 Nationals after three and half in PNC Park. Five pitches into the Pirates fourth, however, Andrew McCutcheon broke Edwin Jackson's streak of eight-straight batters set down with a solo blast to center, over the 399ft sign on the wall and off the batter's eye. 410ft+? 2-1 Nationals. Two outs later, Pirates' first baseman Garrett Jones took a 94 mph 1-2 four-seamer deeeep to right and way over Bryce Harper's head for the second HR of the inning. 2-2 game on the fourth HR Jackson's allowed this year. Before that inning, Jackson had allowed just two HR's in 34.2 IP in 2012.

• E-Jax: After a 23-pitch 4th in which he gave up two home runs to allow the Pirates to tie it up at 2-2, Edwin Jackson bounced back with an 8-pitch, 1-2-3 fifth that had the Nats' right-hander at 67 pitches total on the night. An 11-pitch, 1-2-3 sixth by Jackson had the right-hander up to 78 pitches total, 53 of them strikes after 6.0 IP vs the Pirates. A.J Burnett was dealing two, however, giving up a one-out single by the opposing pitcher before retiring the Nationals on eight pitches in the fifth. Burnett walked Adam LaRoche with two down in the sixth, but needed just 12 pitches to get through another scoreless inning on the mound. 2-2 game after 6 in PNC Park, and another 12-pitch inning in the seventh had Burnett at 81 pitches total, 55 of them strikes with eight K's and 10 ground ball outs after six and half innings on the mound.

• 10 K's for A.J.: 13-pitch, 1-2-3 7th for Edwin Jackson ended with Clint Barmes chasing a 1-2 slider for E-Jax' 5th K in 7.0 innings. Still 2-2 in PNC Park. A.J. Burnett collected K no. 9 on the night from pinch hitter Steve Lombardozzi, who hit for Edwin Jackson in the top of the eighth. A 2-2 knuckle curve from Burnett got Lombo swinging, then Nats' shortstop Ian Desmond took an 0-2 fastball for a called strike three and K no. 10, after which Bryce Harper flew out to left field to end a 12-pitch eighth by the Pirates' starter. Still tied at 2-2.

• E:6 Costly: Tyler Clippard took over for Edwin Jackson in the bottom of the eighth, and issued a one-out walk to the Pirates' left fielder Nate McLouth. The Nats' right-handed reliever (and 2011 All-Star) got a potential DP grounder out of Jose Tabata in the next at bat, however, only to watch it shoot through Ian Desmond's legs on one hop as the Nats' shortstop tried to make the play on his way over to cover the bag. First and third, one out after the E:6, and Neil Walker connected for a sac fly that was deep enough to right to bring McLouth in and give the Pirates the lead. 3-2 Pirates after a 20-pitch frame by Clippard. Pirates' closer (and former National) Joel Hanrahan came on for the top of the ninth, and gave up a leadoff hit by Ryan Zimmerman, who smoked a 95 mph 2-2 fastball for a line drive single to left. The Pirates' closer worked back from 3-0 to a full-count in the next at bat with Adam LaRoche at the plate, but the Nats' first baseman crushed a 97 mph four-seamer, sending a two-run blast into the center field stands. HR! 4-3 Nationals on LaRoche's 5th HR of the year. The 1,000th HR in Nats' team history (since '05).

• Lightning Strikes: Henry "Lightning" Rodriguez took the ball in the bottom of the ninth. Casey McGehee flew to right on a 98 mph 1-1 heater for out no. 1, but pinch hitter Alex Presley connected with a 98mph 1-1 heater from Rodriguez, and dumped a bloop single into short-center to put the tying run on. Another pinch hitter, Yamaico Navarro was up when Henry Rodriguez threw back-to-back wild pitches to allow Presley to take second and then third on consecutive sliders in the dirt that Wilson Ramos couldn't block. WIth the tying run 90 ft from home, the Nats' closer dialed a fastball up to 99 to get a swinging K from Navarro and the second out of the inning... but Pirates' catcher Rod Barajas was waiting on a fastball and he connected with a 96 mph first-pitch heater, sending a two-run blast out to left for the walk-off win. 5-4 Pirates win. 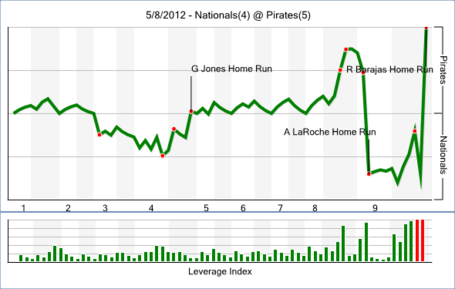