• Back Spasms: Pittsburgh Pirates' lefty Erik Bedard needed just five pitches to retire the first three Washington Nationals' hitters in order tonight in the second of three for the Nats in PNC. Nationals' left-hander Ross Detwiler gave up a two-out single up the middle by Pirates' center fielder Andrew McCutchen in the bottom of the first, then got help from tonight's center fielder for the Nats, Bryce Harper, who tracked down a fly ball off Pedro Alvarez's bat and made a running backhand grab on the warning track in left-center, showing the fans who were taunting him the ball as he made the catch for the third out of an 18-pitch, 12-strike opening frame by the Nats' starter. Three pitches into the second, with Adam LaRoche at the plate and down 1-2, Bedard called the trainer out to the mound and left the game with what were later reported to be back spasms. Pirates' right-hander Brad Lincoln took over on the hill, striking out Adam LaRoche and Danny Espinosa around a groundout to third by Xavier Nady for a 6-pitch, 1-2-3 second against the Nationals. So much for Davey Johnson's right-hand heavy lineup...

• Cue Clown Music: Pirates' outfielder Yamaico Navarro bunted his way on with one down in the bottom of the second, but one out later the 24-year-old one-time Red Sock and Royal was thrown out trying to steal second by Nats' catcher Wilson Ramos for the final out of an eight-pitch frame by Ross Detwiler. (ed. note: "The caught stealing was just the fourth in 22 attempts against Ramos this season.) After a quick, nine-pitch, 1-2-3 top of the third for Pirates' right-hander Brad Lincoln, who set Tyler Moore, Ramos and Detwiler down in order, Lincoln stepped to the plate and reached first safely with one down after striking out on an 0-2 slider in the dirt from Ross Detwiler that got by Wilson Ramos. WP on Detwiler according to the official scorer.

With the pitcher at first, Pirates' outfielder Jose Tabata sent a sharp grounder back to the mound and off Detwiler's foot. As the ball rolled out to second, with Danny Espinosa headed toward the middle of the infield, the Pirates' starter took third, then scored on a Neil Walker single to right in the next at bat. 1-0 Pirates. Andrew McCutchen brought Tabata around to score with the third straight hit off Detwiler, making it 2-0, then McCutchen scored himself one out later (after Ryan Zimmerman threw Neil Walker out at home on a grounder to third), when Ian Desmond hesitated to throw home on a grounder to short, allowing the Pirates' center fielder to score from second on an infield single. 28-pitch inning for Detwiler when it's done and 3-0 Pirates after three innings in PNC Park.

• Robbed, Reviewed, Robbed: Ian Desmond had HR no. 5 of 2012 taken away from him by Pirates' left fielder Yamaico Navarro, who caught the first out of the fourth on a fly to left field that fell into his glove at the top of the low outfield wall. Nats' manager Davey Johnson asked for the catch to be reviewed, apparently thinking there may have been fan interference, but upon review Navarro clearly made the catch to rob Desmond of a leadoff blast. Bryce Harper walked in the next at bat to give the Nationals their first baserunner of the night, and one out later an error by Pirates' 3B Pedro Alvarez (in short right on the shift) on an Adam LaRoche grounder to second allowed the 19-year-old National to go from first to third to put runners on the corners with two down and Xavier Nady due up. Nady then collected the Nats' first hit of the night on a line drive single to right-center that got the Nationals on the board when Harper scored from third to make it 3-1 Pirates after three and a half.

• Make That 20 K's In 2 Days: After a nine-pitch, 1-2-3 fourth for Ross Detwiler, the Nats' left-hander was up to 63 pitches on the night. The third Pirates' pitcher of the night, RHP Jared Hughes, took over in the fifth and struck out the side on 13 pitches, collecting K's no. five, six and seven from the Nats' batters, who K'd 12 times in last night's game. Ross Detwiler needed just eight pitches to get through the fifth, giving up just a two-out single by Andrew McCutchen, who's 3 for 3 tonight after going 1 for 2 with a HR and two walks in four plate appearances in game one. Ian Desmond started the sixth with a leadoff single to center, then took third one out later, stealing second as Ryan Zimmerman K'd and taking the extra base on a throwing error charged to Pirates' catcher Rod Barajas. The Nats' shortstop was stranded at third, however, when Xavier Nady grounded into a force at second after the Pirates put Adam LaRoche on. Still 3-1 Pirates. A 14-pitch, 1-2-3 sixth for Ross Detwiler ended with Pirates' catcher Rod Barajas striking out for the Nats' left-hander's 4th K of the night. 3-1 Bucs after six. Detwiler's up to 85 pitches, 58 of them strikes.

• NO K!: Nats' second baseman Danny Espinosa led off the seventh with an opposite field double, his third of the year, and the third Nats' hit of the night off the Pirates' fourth pitcher, Juan Cruz. One out later, a wild pitch that Bucs' backstop Rod Barajas couldn't backhand allowed Espinosa to take third. A one-out walk to Wilson Ramos put runners on the corners, and Nationals' manager Davey Johnson turned to Chad Tracy, whose fly to left was deep enough to bring Espinosa home. 3-2 game in PNC. Detwiler's done for the night after 6.0 IP, 7 H, 3 R, 3 ER, 0 BB, 4 K's, 85 pitches, 58 strikes, 4/8 GO/FO. Craig Stammen took over in the seventh, and with an assist from Bryce Harper, who misread a shallow fly to right but recovered to make a diving (but still two-handed catch), completed a 14-pitch, 1-2-3 frame.

• ZIM!: Ryan Zimmerman collected his fifth double of the year off the Pirates' fifth pitcher of the night, Jason Grilli, taking a 2-1 fastball from the right-hander to right field for a one-out, two-base hit in the Nationals' eighth. Pirates' skipper Clint Hurdle walked Adam LaRoche (again) to put two on for pinch hitter Roger Bernadina. The Shark worked the count full and walked to load the bases for Danny Espinosa. A swinging K (no.39 of 2012) on a 93 mph full count fastball (after a questionable 3-1 pitch) gave the Pirates two outs, and K no. 10 of the night for the Nats' batters got the Pirates' right-hander out of a bases-loaded, one-out jam. 22 K's in two games for the Nationals. 3-2 Pirates after seven and a half in PNC Park.

• McCutchen!!!: After the Nationals failed to score in the eighth, Pirates' outfielder Andrew McCutchen gave the Bucs a two-run lead with his second HR of 2012, taking Craig Stammen deeeep to left for a one-out solo HR that made it 4-2 Pirates over the Nats after eight. Pirates' closer Joel Hanrahan, who blew the save last night before Henry Rodriguez blew the save, was ridiculously wild at the start of the ninth, hitting Steve Lombardozzi with one down and giving up a one-out double by Ian Desmond, but the Bucs' right-hander recovered and popped Bryce Harper up for out no.2. Second and third, two outs for Ryan Zimmerman. Hanrahan uncorked another wild pitch, but worked the count full, then dialed it up to 96 to blow the Nats' third baseman away and earn the save. The Nationals drop their third-straight, 4-2 final. 23 K's in two games.

• Miss The Game? The DC Faithful Were Watching... and kind of chatty... 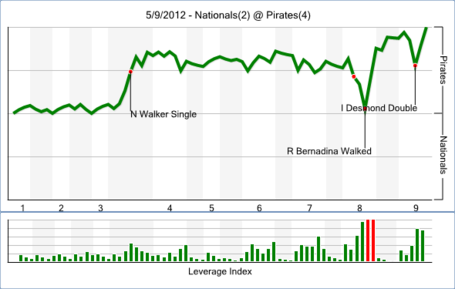