• "Right Side": Danny Espinosa doubled off the Green Monster in left-center for his 12th double of 2012 and a leadoff hit in the Sunday finale of the Washington Nationals and Boston Red Sox' three-game interleague series in Fenway Park. Boston lefty Jon Lester got a flyout to right from Xavier Nady in the next at bat, but the Nats' second baseman tagged and took third as Red Sox' right fielder Ryan Sweeney threw it back in and Espinosa then scored the game's first run when Sox' third baseman Will Middlebrooks bobbled an RBI groundout off Ryan Zimmerman's bat and had to settle for the second out of the inning at first. Lester got Michael Morse swinging for out no. 3 of the opening frame, but it was 1-0 Nationals after a half inning against the Sox in a series in which the Nats have taken the first two.

• No, Big Papi: Jordan Zimmermann gave up a one-out single by Red Sox' second baseman Dustin Pedroia, who reached down for a 2-2 curve and lined it to left field. Adrian Gonzalez battled for six pitches, but hit a 2-2 curve into an inning-ending 4-6-3 that had the Nats' 25-year-old right-hander through a 16-pitch first. Jon Lester needed just 12 pitches to retire the Nationals in order in the top of the second and Red Sox' DH David Ortiz started the bottom of the inning by bouncing one off the Green Monster's out-of-town scoreboard for his 20th two-bagger of 2012. A wipeout 1-2 slider inside to Jarrod Saltalamacchia got Zimmermann his first K of the day. An 0-2 slider to Will Middlebrooks got K no.2 and a groundout to second by Ryan Sweeney stranded Big Papi. 1-0 Nationals after two in Boston. The 13-pitch inning has Zimmermann at 29 pitches after 2.0 IP, 22 of them strikes.

• Porter Jobs Morse: Roger Bernadina's one-out single in the third broke up a streak of seven-straight set down by Jon Lester, and the Red Sox' lefty walked Danny Espinosa in the next at bat to put two runners on. Xavier Nady K'd swinging at a breaking ball outside with both runners on the move but Saltalamacchia couldn't catch it so both Bernadina and Espinosa were safe at second and third. Lester got behind Ryan Zimmerman 3-0 and walked him intentionally to load the bases for Michael Morse, who worked the count full and took a called strike three on a 95 mph sinker that looked inside. Morse didn't like the call, especially after a 1-2 pitch was called a strike outside though it was clearly off the plate. The 27-pitch frame had Lester up to 51 pitches after three.

• Leadoff Walks Rarely Hurt...: Nick Punto worked a seven-pitch walk out of Jordan Zimmermann to put the leadoff runner on in the Red Sox' third, and one-out later Punto went first-to-third when Scott Podsednik snuck a grounder under a diving Adam LaRoche and into right. Danny Espinosa and Ian Desmond tried their best to turn a 4-6-3 on a slow one-hopper to second by Dustin Pedroia, but the speedy Boston infielder beat Desmond's throw to first so the leadoff walk scored to make it 1-1 after 3.0 in the Sunday finale. Ian Desmond doubled to left for his 17th double of 2012, but got caught off second on a grounder to short by Tyler Moore and tagged out as tried to race back to the bag. With Moore on first, a groundout to second by Jesus Flores in the next at bat ended a 12-pitch fourth by Jon Lester.

• David. Ortiz.: Red Sox' slugger David Ortiz was 2 for 2 with a double and a home run after he launched a 95 mph 1-2 fastball from Jordan Zimmermann to right for a leadoff blast in Boston's fourth. 2-1 Sox on Ortiz's 14th HR of 2012. Zimmermann struck out two of the next three batters, retiring all three, for 5 K's total in 4.0 IP, but he and the Nats trailed 2-1 after four innings in Fenway Park. Jon Lester returned the mound in the Nationals' fifth and set Roger Bernadina, Danny Espinosa and Xavier Nady down in order in a 14-pitch, 1-2-3 frame. Jordan Zimmermann retired the first two batters in the Red Sox' fifth, with some help from Danny Espinosa who made a nice sliding play and throw to get Nick Punto in the first at bat, but Scott Podsednik doubled to center with two down and a two-out walk pushed Zimmermann up to 76 pitches on the day. A groundout to first and a toss to Zimmermann covering ended a 19-pitch inning for the Nats' right-hander.

• Pesky Sweeney: Ryan Zimmerman was robbed by Red Sox' right fielder Ryan Sweeney, who made a sliding catch in front of the Pesky Pole for the first out of the Nationals' sixth. Morse K'd for the third time in three at bats for out no.2 of the inning and Lester's 7th strikeout of the game and Adam LaRoche was strikeout victim no. 8 and out no.3. The 15-pitch inning has Lester at 88 pitches after six. Jordan Zimmermann popped David Ortiz up to short right, struck Jarrod Saltalamacchia out with an 0-2 curve for K no.6 in 5.2 IP and threw a 2-2 slider by Will Middlebrooks for K no.7 and out no. 3 of the sixth. The 14-pitch inning had the Nats' right-hander up to 92 pitches, but down 2-1 after six innings in Boston.

• Monstered: Ian Desmond ripped a grounder by Will Middlebrooks at third and into foul territory, but a fan interfered. Instead of giving Desmond second, the umps made him go back to first saying he wouldn't have taken the base on the play. Davey Johnson argued vociferously, but to no avail, but Desmond moved up anyway when Tyler Moore lined a single to right in the next AB. Jesus Flores squared to bunt at a 1-1 change, but "missed" it as Davey Johnson called for a double steal and the runners advanced themselves. Lester got Jesus Flores swinging for the first out. Roger Bernadina tried to get a squeeze bunt down several times, and ended up popping an attempt up for out no.2. And Danny Espinosa flew ou... no "off" the Green Monster just out of Red Sox' left fielder Darnell McDonald's reach. Two runs score. 3-2 Nationals after six and a half.

• Give It Back: Ryan Sweeney and Nick Punton hit back-to-back singles through short to start the Red Sox' seventh after the Nationals reclaimed the lead. Darnell McDonald bunted both runners over/gave away an out. Jordan Zimmermann's 100th pitch of the game was a 95 mph 2-0 fastball to Scott Podsednik that got a swinging strike, but he got behind 3-1 and gave up a groundout to short that brought in the tying run. 3-3 game after seven in Fenway. The 13-pitch inning had Zimmermann up to 105 total, 70 of them strikes in 7.0 IP. Red Sox' right-hander Scott Atchison set the Nationals down in order in the top of the eighth. Tom Gorzelanny took over for the Nationals in the eighth, giving up a one-out single to right by David Ortiz and a two-out walk to Will Middlebrooks but nothing else in a scoreless inning of relief work.

• [CHOMP!]: Alfredo Aceves start the ninth on the mound for the Red Sox. Ian Desmond popped out for the first out of the frame. Bryce Harper, who was given his first day off since being called up to the majors, hit for Tyler Moore with one down in the ninth, or more accurately walked, after replacing Moore at the plate. Jesus Flores K'd swinging for the second out of the ninth. But Roger Bernadina comes through, doubling to right with Harper running and the Nats' 19-year-old outfielder scores ahead of the relayed throw home. 4-3 Nationals. Bernadina takes third, but he's stranded there and Tyler Clippard's coming out of the pen to try for save no. 8 of 2012.

• Clipp'd: Nick Punto K's swinging! ONE!!! Kevin Youkilis worked back from down 0-2 to take a one-out walk from Nats' closer Tyler Clippard and was replaced on the basepaths by infielder Mike Aviles. Scott Podsednik worked the count full, but K'd swinging for out number TWO!!!!!! Dustin Pedroia gets behind 1-2 (on a called strike that gets his manager tossed) and K's swinging to end it! 1-2-3 the Nationals win!! 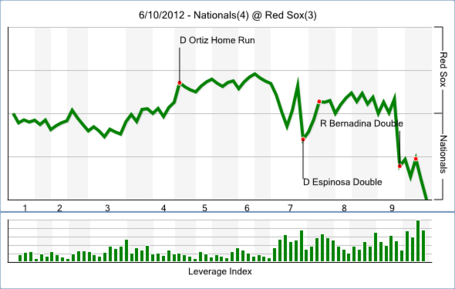