• Morrow's Out: 27-year-old Toronto Blue Jays' right-hander Brandon Morrow was nine pitches into his start against the Washington Nationals tonight, facing 19-year-old Nats' outfielder Bryce Harper, when he called trainers out to the mound after delivering a 1-1 fastball to the Nationals' rookie. Morrow had already allowed a leadoff double by Steve Lombardozzi, and he looked uncomfortable before throwing the pitch to Harper. After he'd missed with the pitch, Morrow called Toronto's trainer to the mound and removed himself from the game with what lip/mind readers on Twitter said was an oblique/rib issue. We'll update when Toronto releases the actual information. [ed. note - "Later called a left oblique strain."] Right-hander Chad Beck took over on the mound for Toronto and gave up an RBI single by Harper on the first pitch he threw. Harper ripped a grounder through the right side of the infield and Lombardozzi scored easily from second to give the Nationals 1-0 lead in the top of the first...

Harper was running in the next at bat when Ryan Zimmerman hit a sharp grounder toward first that Blue Jays' first baseman David Cooper misplayed. Harper took third on the error, and one out later scored on a sac fly to right by Michael Morse. 2-0 Nationals after a half inning in the Rogers Centre. Nats' right-hander Edwin Jackson got the first out of the Blue Jays' first on a groundout to Adam LaRoche by Brett Lawrie, but E-Jax got behind Colby Rasmus and challenged the outfielder with a fastball that ended up bouncing off some empty blue seats in the second deck above the right field wall in the Rogers Centre. Rasmus' 9th HR cut the Nats' lead in half, 2-1 game. Edwin Jackson threw 24 pitches in the first, but got out of the opening frame with the one-run lead in tact.

• Not an E: Chad Beck retired the Nationals in order in a quick, nine-pitch 1-2-3 second that ended with Blue Jays' right fielder diving on the beat-up looking outfield turf to rob Nats' catcher Jesus Flores of a two-out single. Edwin Jackson gave up a two-out "hit"* on a sharp grounder to third by Blue Jays' catcher J.P. Arencibia that Ryan Zimmerman somehow knocked down but couldn't play cleanly, but E-Jax got the third out one pitch later when Rajai Davis flew to right to end the second-straight nine-pitch frame. [ed. note - " * = Scorekeeper said E on Zim, but no way."] Bryce Harper took a four-pitch one-out walk from Chad Beck in the Nationals' third, then stole his 4th base of the season with Zimmerman at the plate. Zim grounded out to short for out no.2, failing to advance Harper, but Adam LaRoche hit HR no.11 in the next AB, allowing Harper to trot/sprint home from second, and putting the Nationals up 4-1 after two and a half in Toronto.

• No Shark No!!: Blue Jays' third baseman Brett Lawrie lined to left on a 93 mph 1-1 fastball from Edwin Jackson for a leadoff single in the bottom of the third. Lawrie took second on a Colby Rasmus groundout to second, but after Jose Bautista and Edwin Encarnacion grounded to third and short, respectively, E-Jax was through a 12-pitch 3rd at 45 pitches total, 30 of them strikes after three. Roger "The Shark" Bernadina took a four-pitch, one-out walk from Chad Beck, then took third on a wild pitch by the Blue Jays' right-hander, but Bernadina slid hard into third though there was no throw and somehow injured himself in the process. A day after Nats' skipper Davey Johnson said the Shark would be seeing more playing time in center, the outfielder leaves the game limping off the field with a leg/knee injury. 4-1 Nationals after three and a half.

• Harper pwns LHP: Edwin Jackson needed just 12 pitches to retire the Blue Jays in order in the fourth. Bryce Harper, who entered today's game 15 for 42 (.357/.426/.667) against LHPs collected another hit off Toronto left-hander Luis Perez, leaving him 2 for 2 with a walk on the night. Harper tried to take third in the next at bat when Ryan Zimmerman hit a broken bat single to right, but Blue Jays' right fielder Jose Bautista came up throwing and had Harper dead to rights at third for the first out of the inning. An Adam LaRoche fly to center and a Michael Morse groundout ended the Nationals' 5th after 14 pitches by Perez. Edwin Jackson needed just seven pitches to retire the Blue Jays in order in the home half of the fifth and he'd set nine in-a-row down going back to Brett Lawrie's leadoff single in the third.

• E-Jax: Ian Desmond and Danny Espinosa hit back-to-back singles off Blue Jays' lefty Luis Perez in the top of the sixth, but a DP grounder off Xavier Nady's bat and a swinging K by Jesus Flores ended a relatively quick inning by the Toronto reliever. Edwin Jackson got a fly to right from Colby Rasmus for the 10th straight batter set down, but a one-out walk to Jose Bautista ended the streak. Edwin Encarnacion took a 94 mph 2-2 fastball for a ride to right but it fell into Xavier Nady's glove just short of the wall for out no.2 and Kelly Johnson K'd swinging for out no.3 and K no. 3 for Edwin Jackson, who was up to 80 pitches even after a 12-pitch 6th.

• 2 on, 0 outs. Again: Steve Lombardozzi reached on a bunt single that obeyed his commands and stayed fair as it rolled toward third. Bryce Harper followed with a single to center, leaving him 3 for 3 tonight and putting two on with no outs for the second-straight inning. Luis Garcia was replaced by right-hander Jason Frasor, who got Ryan Zimmerman swinging with an 0-2 fastball up high, but gave up a one-out single by Adam LaRoche, who pushed an opposite field hit through short into left. Bases loaded. One out. Michael Morse flew out to center, but not deep enough for Lombo to score. Bases loaded, two outs for Ian Desmond, and the Nats' shortstop came through with an opposite field RBI single that made it a 5-1 game after six and a half.

• E. Jax: Edwin Jackson gave up a two-out walk to J.P. Arencibia in Toronto's sixth, but got help from Adam LaRoche on a sharp grounder to first that the Nats' infielder gracefully and effortlessly jumped on before running it over to the bag himself for out no.3. The 15-pitch inning had E-Jax through seven on 95 pitches, 60 of them strikes. Rick Ankiel took the fifth pitch of the eighth to left-center and out of the field of play for his fourth HR of 2012 and a 6-1 Nats' lead on the oppo-boppo blast. Blue Jays' right-hander Francisco Cordero almost gave up back-to-back jacks, but Jesus Flores settled for a double off the wall. Flores' third. Three outs later, Flores was stranded at second, however, it and it was 6-1 Nats after eight.

• CG?: Blue Jays' right-hander Carlos Villanueva threw a quick, 1-2-3 top of the 9th. Edwin Jackson came back out for the bottom of the inning with 106 pitches on his arm and gave up a leadoff double to center by Edwin Encarnacion. It was the Blue Jays' third hit of the game and E-Jax' last at bat of the night.

• Straighten That Cap, PUNK!: Sean Burnett took over with a runner on second and no one out in the ninth. Kelly Johnson K'd swinging through a 1-2 slider to end the night 0 for 4. Yunel Escobar battled for eight pitches, but ended up fouling strike three into Jesus Flores' mitt. Two down. Pinch hitter Yan Gomes took Burnett deep for a two-run HR to center that made it 6-3, but a groundout to short in the next at bat ended the first of three for the Nationals in Toronto. 6-3 W. The Nationals' fourth straight win. 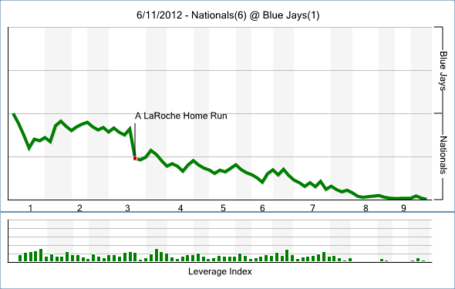