There were reports last week that the Washington Nationals had agreed to terms with 2nd Round pick Tony Renda, a second baseman out of Cal-Berkeley and 4th Round pick Brandon Miller, an outfielder out of Samford University. Baseball America's Jim Callis tweeted last week (@JimCallisBA) that 5th Round pick, Clemson C Spencer Kieboom had signed for $200K. The Nationals, in a press release this afternoon, confirmed those three picks had signed and added the names of 20 other 2012 selections who had already agreed to deals. As they note in the release, 10 of the Nationals' Top 14 picks have signed, with 1st Round pick RHP Lucas Giolito of Harvard-Westlake HS, 3rd Round pick LHP Brett Mooneyham of Stanford, 7th Round pick RHP Robert Benincasa of Florida State and 8th Round pick shortstop Stephen Perez of Miami the four who remain unsigned out of the top 14 picks. 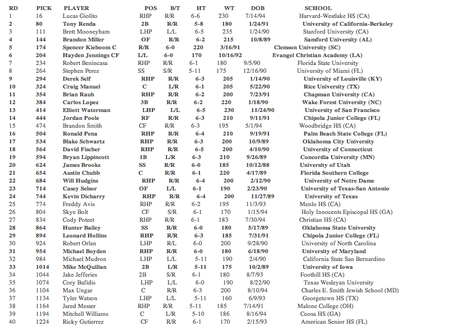 The Nats' GM told hosts Holden Kushner and Danny Rouhier that his front office is willing to take risks with their draft picks, but the particular selection of Giolito, Rizzo said, "... was a risk that was very, very calculated. The upside of this acquisition and this draft choice outweigh the downside ten-fold in my mind." In the 17-year-old, 6'6'', 230 lb Giolito, the general manager explained, "You got yourself a top-of-the-draft guy who could have went anywhere from one, two or three in the draft if he didn't have the hiccup with the elbow and also a guy that we evaluate as a guy who could be a top-of-the-rotation starting pitcher once he develops."

"When those guys get to you at [pick no.] 16," Rizzo continued, "You pull the trigger and take them and we've done all our due diligence with the health, the makeup, with the signability. Obviously the risk is that he could have some problems down the road, but the medical people say that if it is an elbow problem it will be an elbow ligament problem which we're unfortunately all too familiar with here, but we felt that the risk of that injury happening and the rehab and the way that these elbow injuries bounce back was something that we were willing to take."