• Harper Invades Canada: Washington Nationals' outfielder Bryce Harper hit a 96 mph 1-1 four-seamer from Toronto right-hander Henderson Alvarez through the right side of the infield for a one-out single in his first at bat in game two of three for the Nats in the Rogers Centre. The hit was Harper's fourth in five at bats vs the Blue Jays one game and one AB into the series. The 19-year-old phenom was 3 for 4 with a walk and RBI last night, but he was stranded at second in the first inning this evening after a Ryan Zimmerman groundout moved him up and a foul pop from Adam LaRoche ended a 20-pitch opening frame for Alvarez, the 22-year-old, second-year Blue Jays' starter.

In the bottom of the first, Chien-Ming Wang gave up a leadoff single by Blue Jays' infielder Brett Lawrie, who promptly stole second ahead of a throw from Nats' backstop Jhonatan Solano, but Lawrie came up and off the the bag as he popped up after sliding and got tagged by an attentive Ian Desmond for the first out of the frame. A fly to left from Colby Rasmus got Wang out no.2, but he walked Jose Bautista on four pitches, allowed the Jays' outfielder to take second on a wild pitch and then third on a stolen base that was taken 100% on the pitcher. With a runner on third and two down, Wang got a groundout to short and he was through a scoreless first on 15 pitches...

• Left Side?: Michael Morse sent a ground ball by first that trickled into right for a leadoff single in the Nationals' second, but he was quickly erased on a 6-3 DP turned by Blue Jays' shortstop Yunel Escobar. Danny Espinosa hit an opposite field double from the left side of the plate with two down, but a swinging K by Rick Ankiel ended the top of the inning. Chien-Ming Wang got help from a sliding, rangy, strong-armed Danny Espinosa on the second of two groundouts in the bottom of the second, and a fly to left from Jays' DH David Cooper ended a 12-pitch, 1-2-3 inning by the Nats' sinkerballing right-hander. 27 pitches through two for Wang.

• OFF THE BLACKBERRY SIGN!!!: Make that 5 for 6 in the series. After singling in his first at bat, 19-year-old Nats' right fielder Bryce Harper homered the second time up, taking a first-pitch change to deeeeeeeep center in the Rogers Centre for what I'll estimate was about a 450ft HR. (Too generous?) High above the field of play the ball ran into an enormous Blackberry banner and sent waves rippling out across whatever its surface is made of. 1-0 Nationals on Harper's 7th of 2012. Chien-Ming Wang struck the first two batters out in the Blue Jays' third, but hit Brett Lawrie with an 0-1 fastball to put a runner on with two down. Colby Rasmus singled to right in the next at bat, allowing Lawrie to go first-to-third just ahead of a strong throw to the bag from Harper. Wang walked Jose Bautista for the second time in two at bats, loading the bases with two down in front of Edwin Encarnacion, but then got the Blue Jays' first baseman looking with 1-2 slider to end a 27-pitch third.

• Harper's Massive Blast of a HR:

• Left Side Danny? I'm So Confused: Adam LaRoche ripped a leadoff double to right-center on a 2-1 two-seamer from Henderson Alvarez. The two-bagger was LaRoche's 15th of 2012. Two-outs later LaRoche was still standing at second as Michael Morse and Ian Desmond failed to advance the runner, but Danny Espinosa took a 93 mph first-pitch fastball deep to center and just over the wall for a two-out, two-run HR and a 3-0 Nationals' lead. Espinosa's 6th HR of 2012, and he's 2 for 2 tonight with a double and a dinger. Chien-Ming Wang struck Kelly Johnson out in a five-pitch at bat for the first out of Toronto's fourth and got a groundout to second with one pitch to Yunel Escobar. The Nats' right-hander issued back-to-back, two-out, four-pitch walks in the next two at bats, however, before getting Blue Jays' catcher Jeff Mathis looking with a 2-2 fastball that ends a 19-pitch fourth for Wang.

• Less Walks And HR's Allowed Please: Jhonatan Solano took an 0-1 slider to center for a line drive single and Steve Lombardozzi hit a 2-2 two-seamer to right to put two on for Bryce Harper in his third at bat. The speedy outfielder grounded into a force at second, but beat out the back-end of a 3-6-1 DP attempt by the Blue Jays. Ryan Zimmerman stepped in with runners on first and third, and hit into a 6-4-3 to end the Nationals' fifth. Chien-Ming Wang issued the third walk in four at bats to Brett Lawrie to start the bottom of the fifth. Wang got a groundout but no double play on a sharp one to second off Colby Rasmus' bat, then gave up a two-run HR by Jose Bautista in the next at bat when he left a 3-1 sinker up for the Blue Jays' slugger, who crushed the fastball for his 18th HR of 2012. 3-2 game in the fifth.

• Onion's First: Henderson Alvarez retired the Nationals in a quick 6-pitch, 1-2-3 6th after which Nats' lefty Ross Detwiler replaced Chien-Ming Wang on the mound. Wang's line: 5.0 IP, 4 H, 2 R, 2 ER, 5 BB, 5 K's, 1 HR, 95 P, 48 S, 6/3 GO/FO. Detwiler matched the Blue Jays' starter with his own 6-pitch, 1-2-3 inning to settle things down after the Blue Jays rallied in the fifth. Henderson Alvarez was cruising through the seventh with two down and an 0-2 count on the Nats' no.9 hitter, Jhonatan Solano when the 26-year-old rookie backstop took a two-strike slider to left and into the bullpen behind the outfield wall for his 1st MLB HR and a 4-2 Nationals' lead after six and a half. Brett Lawrie and Colby Rasmus both hit Detwiler hard, but Bryce Harper caught both balls in right for the first two outs of the Blue Jays' seventh. That was all for Det. Craig Stammen came on to face Jose Bautista, who double by third and off the stands that stick out into left. Edwin Encarnacion's attempt to tie it died on the warning track, however, where Rick Ankiel made the catch to end the Blue Jays' seventh. Still 4-2 Nats.

• STOP BUNTIN-- Oh, A Hit!: Bryce Harper bunted his way on in the 8th, hitting one a little too hard that Edwin Encarnacion couldn't handle, but was caught trying to steal second in the next at bat. Two quick outs later, Blue Jays' lefty Darren Oliver was through a scoreless frame in relief. Sean Burnett needed just six pitches to retire the side in order in the bottom of the eighth. Still 4-2 Nationals. Ian Desmond battled Blue Jays' right-hander Jason Frasor in an eight-pitch AB in the 9th, drawing a one-out walk from the reliever. Desmond stole second with Danny Espinosa up, but two outs later he was stranded at second. 4-2 Nats after eight and a half.

• Clipp'd: Nats' right-hander Tyler Clippard came on for the bottom of the ninth, looking for save no.9 of 2012. Rajai Davis almost got knocked down twice as Clippard struggled with his control, but the Blue Jays' outfielder ended up striking out swinging through a 3-2 four-seamer. ONE!!! Pinch hitter Omar Vizquel popped out to second. TWO!! Brett Lawrie got a filthy 2-2 change and K'd swinging to end it. Nationals win their fifth striaght. 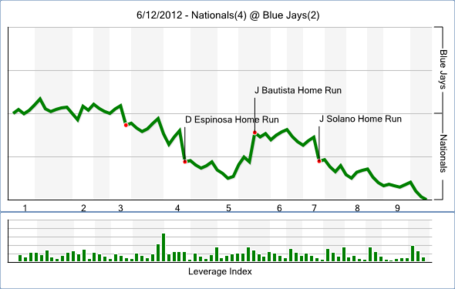