• Toronto, Ontario: 24-year-old, right-handed, '06 1st Round pick Kyle Drabek, the former Phillies' prospect acquired as part of the December '09 trade that sent Roy Halladay from Toronto to Philadelphia, retired Washington's first three batters in order in a nine-pitch first in the finale of the three-game series between the Blue Jays and Nationals in the Rogers Centre this afternoon. In the bottom of the inning, Nats' '09 no.1 overall selection Stephen Strasburg gave up an infield single on a swinging bunt toward third off Brett Lawrie's bat that Ryan Zimmerman couldn't barehand like he normally would on real grass. Strasburg threw a letter-high fastball by Blue Jays' outfielder Colby Rasmus for out no.1 of Toronto's first. Ian Desmond somehow managed to backhand a sharp turfer (grounder on turf) and made a shuffle pass to second for the force and out no.2. Edwin Encarnacion battled in a seven-pitch, two-out AB, but eventually K'd swinging through another letter-high heater. 96 mph on the gun. 0-0 after one.

• Moore, Moore, Moore: Nats' slugger Michael Morse went way down to get a 2-2 cutter just inches above the plate and golfed it to center for a leadoff single off the Blue Jays' Drabek. Ian Desmond worked a six-pitch walk in the next at bat, and both runners advanced on a sharp grounder toward first by Danny Espinosa on which Edwin Encarnacion made a fairly spectacular diving play. With Adam LaRoche sitting after fouling a pitch off his foot last night, Tyler Moore got his first major league start at first and the Nationals' 25-year-old rookie doubled to left-center and off the STANLEY Tools sign on the outfield wall in the Rogers Centre. Moore's second double of 2012. 2-0 Nationals after one and a half in Toronto.

• Ch-Ch-Ch-Change-up: Stephen Strasburg dropped a brutal 87 mph 1-2 change on Blue Jays' DH David Cooper for out no.1 of the Blue Jays' second and the Nats' right-hander's 3rd K in 1.1 IP. Bryce Harper settled in under a pop fly to right from Yunel Escobar for out no.2 of Toronto's second, but Kelly Johnson extended the inning when he took a 97 mph 1-2 four-seamer to left for a two-out opposite field single. J.P. Arencibia battled Strasburg for eight pitches, but an 87 mph change after a 96 mph fastball was just too much and got the Blue Jays' catcher swinging. 4 K's for Strasburg thru 2.0 IP. 41 pitches total after a 22-pitch inning.

• Bautista Crushes One: Bryce Harper's ninth double of 2012 was a hard-hit, one-out liner to right on a 96 mph first-pitch fastball from the Blue Jays' Kyle Drabek in the top of the third. Harper moved up on a one-hopper to third off Ryan Zimmerman's bat that Brett Lawrie couldn't backhand, but Toronto's infielders turned a 6-4-3 DP on a grounder to short by Michael Morse and Drabek escaped further damage in a 15-pitch third. Stephen Strasburg gave up a leadoff triple to right on an 0-1 fastball to Blue Jays' outfielder Rajai Davis, who scored to cut the Nats' lead in half on a groundout to short by Brett Lawrie. 2-1 game. And one out later, after Strasburg struck Colby Rasmus out with a brutal 0-2 change, the Nationals' right-hander gave up a towering HR to left on a 2-0 change to Jose Bautista, whose 19th HR of 2012 tied it at 2-2 after three. Two runs allowed by Strasburg... in a 10-pitch 3rd.

• Moar Moore Moar!!!: Danny Espinosa sent a first pitch change from Drabek out to right for a one-out single in the Nationals' fourth, and Tyler Moore gave the Nationals their two-run lead back four pitches later when he crushed an 88 mph 1-2 cutter, taking it to left-center and off the wall behind the outfield wall for his first MLB HR and a 4-2 Nationals' lead. Moore collects his second career double and his first home run in consecutive at bats. 2 for 2 with 4 RBI's. Steve Lombardozzi grounded into a force at second with two on and one out after a single by Rick Ankiel and a Jesus Flores walk, so there were runners on the corners when Bryce Harper stepped in, but a groundout to second ended the Nationals' fourth. Strasburg got a groundout to first with the second pitch of the Blue Jays' half of the inning, got grounder to short for out no.2 and a called strike three for the final out of a 13-pitch, 1-2-3 4th. 6 K's, 64 pitches total for Strasburg.

• Another Jay Down: The Blue Jays' lost right-hander Brandon Morrow to an oblique strain during the first game of three in this series, and with one out in the fifth inning this afternoon Kyle Drabek left the mound with an undisclosed injury. Rough week for Toronto's starters. 4-2 Nationals after LHP Aaron Laffey got the final two outs of the inning and Stephen Strasburg was back on the mound quickly for the bottom of the frame. A rising 97 mph 1-2 fastball to J.P. Arencibia got a swinging K. Strikeout no. 7 on the day. Rajai Davis dumped a one-out bloop single into center for his second hit in two at bats, but he was off way too early and got caught stealing by Strasburg for the second out of Toronto's fifth, which ended two pitches later on a fly to right by Brett Lawrie. Eight-pitch inning for Strasburg. 4-2 Nats after five.

• MOORE MOAR MOORE!!: Tyler Moore did it again in the 6th, taking Blue Jays' lefty Aaron Laffey deep to center field for a solo HR and a 5-2 Nationals' lead. Moore's 3 for 3 with a two-run double and two home runs, his first two in the majors and 11th this season in 130 at bats between Triple-A and the Nats' lineup. 5-2 Nationals after five and a half. Stephen Strasburg got Colby Rasmus swinging with a 2-2 change for his 8th K in 5.1 IP today. Jose Bautista took the first walk of the game from the Nats' right-hander and took second on a pitch in the dirt that got lost in catcher Jesus Flores' feet. Two fly ball outs later, Bautista was stranded at second as Strasburg completed a 17-pitch 6th.

• Strasburg Out After 6.0 IP: Stephen Strasburg could be seen in the dugout while the Nats' batter in the top of the seventh, talking to pitching coach Steve McCatty and manager Davey Johnson. After a long discussion the Nationals decided their right-hander was done. They were examining Strasburg's fingers, leading the Toronto announcers to guess that either a blister or broken nail may have ended his day, but either way Strasburg stayed in the dugout as the Nats took the field and Craig Stammen took over for the Nats' starter...

Stammen gave up a leadoff single by Yunel Escobar, but stranded the Blue Jays' infielder at third three outs later after he'd struck out two and completed a 13-pitch, nine-strike seventh. Ian Desmond chased Aaron Laffey with a solo blast to left that bounced off some empty Rogers Centre seats in the second deck high above the outfield wall. Desmond's 9th HR of 2012 makes it 6-2 Nationals after eight. Craig Stammen gave up a one-out ground rule double by Colby Rasmus in the Blue Jays' eighth, but he got Jose Bautista looking with a 2-2 bender for out no. 2 before walking Edwin Encarnacion in a 10-pitch at bat to put two on with two out. Blue Jays' DH David Cooper K'd swinging, however, and it was still 6-2 Nats after eight in the Rogers Centre.

• Sweep?: Blue Jays' right-hander Casey Janssen retired the Nationals in order in the top of the ninth. Brad Lidge came on to get an inning of work in the bottom of the inning. Yunel Escobar went down swinging at a slider. ONE!!! Kelly Johnson flew out to center. TWO!!!! And J.P. Arencibia lined a one-hopper to first to end a 1-2-3 9th. 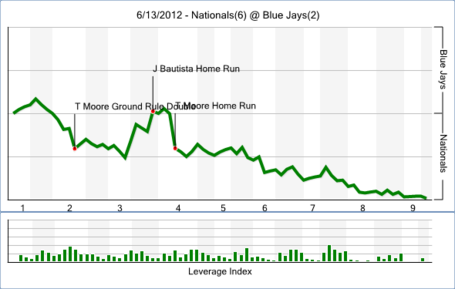