With the Washington Nationals up 2-0 on the Atlanta Braves back on June 2nd, and Stephen Strasburg up to 90 pitches after 7.0 scoreless, Nats' skipper Davey Johnson decided that it was the perfect situation for the bullpen to wrap one up. "I know [Strasburg] was still strong, he still had another inning or two in him, but after three rough outings I figured it was the perfect scenario. My bullpen was set up perfect with the job he did." Johnson turned first to Sean Burnett in the eighth and then Tyler Clippard in the ninth and both did their jobs to help hold and save Strasburg's sixth and the Nationals' 30th win of the season.

"With the situation this year on innings," Johnson explained further referring to the undefined "innings limit" the Nationals will hold the 23-year-old right-hander to in his first full year back from Tommy John, "I've been taking innings away from him. Don't tell him I said that. But, I've been going short with him." Johnson's comments and his raised eyebrows when he made them drew a few laughs from the reporters around him. The Nats' 69-year-old skipper certainly wasn't concerned with conserving pitches/innings when he let Strasburg throw 119 against the Boston Red Sox in his next outing after the 7.0 shutout innings against Atlanta...

Strasburg struck 13 Red Sox' batters out in 6.0 innings and struggled in his final frame of work, loading the bases and throwing 33 pitches total in the inning before striking out the last two batters he would face, so there was little question he was coming out at that point. When the situation's called for it, Davey Johnson's let Strasburg go. When he sees an opportunity to save a few "bullets" for later in the season he takes it. But inevitably, Stephen Strasburg is going to reach the end of the line and get shut down as the Nationals have maintained all year, right?

I’ll say it again: The Strasburg innings limit is absurd. He is not 19 years old. He is almost 2 years post-op. This is the major leagues.

Before today's 6.0 IP which brought Strasburg up to 77.0 innings total in 13 starts, Washington Post writer Thomas Boswell responded to a question about how the Nationals will handle the right-hander the rest of the way by explaining that the, "... Nats say he can go 160-to-170. If he looks strong, it'll be close to 170," so, "... at his current inning-per-game rate, that gives Strasburg 16, or more likely 17 starts the rest of the year," meaning that the Nationals wouldn't need a replacement for him in the rotation until, mid-September. "That's not much of a problem," the WaPost reporter wrote, "Just put 2-out-of-3 of [Ross] Detwiler, [Chien-Ming] Wang and [John] Lannan in the rotation after that."

"Presumably very few people would be crass enough to think Strasburg should get 33 starts plus more in the post-season," Mr. Boswell added. 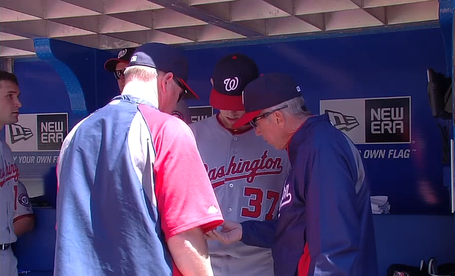 Strasburg's innings limit came up again this afternoon after Davey Johnson removed the starter after just 86 pitches total in 6.0 IP. The reason this time, however, was a cut on the pitcher's finger. The Toronto Blue Jays' tv announcers noticed the pitcher, Johnson and pitching coach Steve McCatty examining Strasburg's hand in the dugout once he came back from the mound following the sixth. The footage seems to support the manager's contention, as he told reporters after the game, including the Washington Post's Adam Kilgore that he saw the finger and immediately decided his pitcher was done:

"'He came back in, and I saw it was a little cut,' Johnson said. 'There was one pitch that aggravated it when he threw. He said, ‘I just won’t throw that pitch.’ I said, ‘You won’t throw [any more] pitches.’ He was fighting tooth and nail not to come out of that ballgame.'"

According to reports after the game, Strasburg cut his own finger while trimming his finger nails before he went back out for the sixth. The '09 no.1 overall pick clearly wasn't pleased with the decision, arguing in the dugout and pacing a bit, occasionally rolling his eyes as he talked to his manager and pitching coach, but the Nationals' manager made the decision. That is why Davey Johnson's there. Of course, Strasburg wanted to pitch, thought he could, and likely would have, but just like when he had his elbow surgically-repaired and thought (as others have said they have after surgery) that he could cut loose right away, but was held back with a steady progression from soft-tossing, to long-tossing, to returning to the mound and eventually bullpens, competitive action and the majors. All of it overseen by the Nationals, their instructors, medical staff and now coaching staff.

There's a plan in place here, agree with it or not. As Rizzo's stated repeatedly since Strasburg's returned, they're going to stick with it just like they did with Jordan Zimmermann last year. The Nats' GM knows Strasburg's not going to like it when he's eventually shut down, just like he was unhappy today when he was taken out, but the Nationals are doing what they (and his doctors) think is best for the 23-year-old right-hander long-term. And they will continue to right up until the point they shut him down for the season likely sometime in September. Right? Regardless of what position they're in in the standings or how close they are to the first playoff appearance since 1933...

Until the moment Strasburg's shut down, people will continue to doubt it's going to happen, but the Nationals have shown no signs thus far of an intention to deviate from the plan they laid out last summer when Strasburg started to work his way back. With the success the Nationals are having this season, however, the pitcher told reporters today (as the Washington Posts's Adam Kilgore wrote) that as hard as he tries to avoid thinking about possibly being shut down, he can't avoid wondering what will happen:

"'With the direction that we’re going and everything, it makes it even harder to not think about it. I can’t control that. Hopefully things can change, and if we get to where we want to be, somehow I’m part of it.'"