• NY vs D.C.: The Washington Nationals (38-23) entered action tonight in first place in the NL East, having won six straight and nine of their last eleven. The New York Yankees (37-25) are currently in first in the AL East, having won six straight themselves, and nine of their last eleven as well. And they're the NY Yankees, the most storied franchise in Major League history. As Nats' skipper Davey Johnson put it before the game, "This is just one battle in this long war, but if you can't get up for the Yankees when they come into town, then forget it."

Gio Gonzalez was up for it. The Nats' 26-year-old left-hander received a nice ovation when he walked in from the bullpen tonight, and the crowd cheered wildly again when he went to a full count with each of the first two Yankees' batters he faced, throwing a 95 mph full-count fastball by Derek Jeter for out and K no.1 before getting Curtis Granderson swinging at a 96 mph 3-2 heater for the second out and his second K. Two down, and Gonzalez got help from his center fielder for out no. 3, as Bryce Harper made a diving catch on a line drive off Mark Teixeira's bat to end a 15-pitch, 1-2-3 top of the inning for the Nationals' starter. Yankees' right-hander Phil Hughes gave up a leadoff walk to Steve Lombardozzi and a one-out opposite field single by Ryan Zimmerman, but the 26-year-old '04 1st Round pick stranded both runners when he struck both Adam LaRoche and Michael Morse out in consecutive AB's to end a 20-pitch first in D.C...

• Gio vs Phil: Another full-count fastball, this one at 96 mph to Alex Rodriguez, got Gio Gonzalez his third K in 1.1 IP, but Nick Swisher lined a one-out single over second for the Yankees' first hit off the Nats' left-hander. Andruw Jones watched a 2-2 curve drop in for a called strike three and Gonzalez's fourth K, but Russell Martin worked the count and drew a two-out walk in an eight-pitch at bat that put two on with two out for Jayson Nix, who K'd swinging at an 0-2 bender he had no hope of hitting. 5 K's in 2.0 scoreless after he strikes out the side, but a 26-pitch second has Gio Gonzalez up to 41 pitches after 2.0 IP. Jesus Flores hit an opposite field, two-out double off Phil Hughes in the Nats' second, but the Yankees' right-hander got the opposing pitcher swinging at an 0-2 curve to end a 14-pitch bottom of the inning in D.C.

• 2-Out Hits Hurt: Derek Jeter bounced an opposite field double off the right field wall with one down in the top of the third, and Gio Gonzalez issued a two-out walk to Mark Teixeira, bringing Alex Rodriguez up with two on and two out and the Yankees' third baseman came through with an RBI single through the right side of the infield that gave New York an early 1-0 lead. Nick Swisher hit a low liner through the left side for the second-straight RBI single and a 2-0 lead, but A-Rod got caught taking too wide a turn around second when Ryan Zimmerman cut the throw in and caught his counterpart in a rundown. Gio Gonzalez escaped further damage in a 22-pitch inning that had him up to 63 pitches after 3.0 IP.

• #LOMBOLOBBY!!: Steve Lombardozzi snuck a leadoff single by a drawn-in A-Rod at third to start the Nationals' third, and Bryce Harper grounded back up the middle and off Phil Hughes' cleat for an infield single and two on with no outs. Ryan Zimmerman flew out unproductively to left in the next at bat, but Adam LaRoche walked to load the bases for Michael Morse and the Nats' slugger came through with an RBI single to center that cut the Yankees' lead in half before Ian Desmond hit into an inning-ending 6-4-3 DP in the next AB. 2-1 Yankees after three.

• P2K > P2C: Gio Gonzalez got Jayson Nix looking with a 2-2 bender to end a relatively quick 16-pitch 1-2-3 4th. 79 pitches and six K's after 4.0 IP by the Nats' lefty. Phil Hughes needed just 10 pitches to retire the 7-8-and-9 hitters in the Nats' lineup in a 1-2-3 bottom of the inning, after which he was at 63 pitches total. Phil Hughes K'd looking at a 1-2 heater inside for Gonzalez' 7th K and the first out of the fifth. Derek Jeter flew to center for out no. 2 and Gonzalez got Curtis Granderson swinging way out in front of an 81 mph 2-2 bender for his 8th K and the final out of a 14-pitch inning that had the Nats' starter at 93 pitches overall after 5.0 in Nationals Park. Phil Hughes retired the Nationals in order in a 16-pitch 5th. Seven-in-a-row set down by the Yankees' right-hander after Michael Morse's RBI single in the third. Still 2-1 NY after five.

• That's All For Gio: After a 1-2-3 sixth, Gio Gonzalez had set nine-in-a-row down after Nick Swisher's two-out single in the third. The 14-pitch inning had the Nats' lefty up to 107 pitches on the night. Ian Desmond hit a two-out single through short to end Phil Hughes' streak of retired batters at nine, but Danny Espinosa K'd looking to end a 28-pitch inning, after which the Yankees' starter was up to 107 pitches too. Gio Gonzalez threw just two pitches in the seventh, surrendering a leadoff single by Andruw Jones that snuck by both Ryan Zimmerman and Ian Desmond and broke the Nats' lefty's streak of nine-in-a-row retired. That was it for Gio, who was replaced on the mound by Brad Lidge. 109 pitches in 6.0 IP for Gio. A runner is on when he leaves...

• Der-ek Je-ter [clap clap, clapclapclap]: Pinch runner Dewayne Wise stole second on the first pitch by Lidge. Russell Martin worked an eight-pitch walk out of the Nats' reliever, and a sac bunt by Jayson Nix moved both runners into scoring position with one down. Pinch hitter Robinson Cano got a free pass to load the bases for Derek Jeter, who worked the count full and grounded to short... Desmond fielded it cleanly, but bounced the throw by Adam LaRoche. Two runs score. Single and an error. 4-1 Yankees. Make that 6-1 after Curtis Granderson's two-run double to left off Nats' lefty Michael Gonzalez.

• Yankees' righty Cody Eppley retired the Nationals in order in an eight-pitch seventh. Nats' lefty Tom Gorzelanny retired the first two batters in the eighth before a two-out single by Russell Martin. A 2-2 four-seamer got pinch hitter Eric Chavez swinging to end the Yankees' half of the inning after 17 pitches by Gorzelanny. NY lefty Clay Rapada retired the Nationals in order in the eighth, striking out Bryce Harper and Adam LaRoche around a fly to right by Ryan Zimmerman. 16 of 17 set down with Ian Desmond the only runner to reach after the third. Curtis Granderson hit his 20th HR of the year off Gorzelanny in the top of the ninth, making it a 7-1 game in Nats Park. Michael Morse hit his fourth double of the season off the out-of-town scoreboard in right to start the 9th. Yankees' right-hander David Robertson got over to first to cover on a grounder to Mark Teixeira by Ian Desmond that moved Morse to third. Another grounder to first by Danny Espinosa brought the Nats' second run in, 7-2, and a two-out single by Jesus Flores kept hope alive until Rick Ankiel K'd swinging to end it. Ballgame. 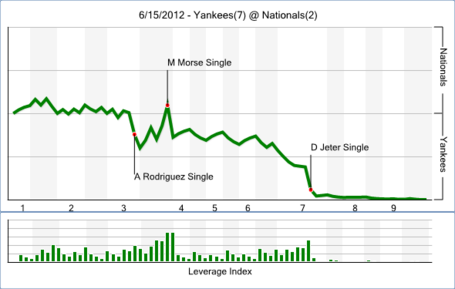