• Not A Good Start: Washington Nationals' right-hander Edwin Jackson got a grounder back to the mound with a 93 mph full-count fastball to New York Yankees' leadoff man Derek Jeter, but it bounced off Jackson's glove and died in the infield grass behind the mound for a leadoff single. The Nats' starter got behind NY outfielder Curtis Granderson in the next at bat and gave up a double that bounced off and over the first base bag and into the right field corner to put runners on second and third with no outs. Jackson got the first out of the inning when Alex Rodriguez flew to short left on a 95 mph 1-1 fastball, and it wasn't deep enough to score Jeter from third. E-Jax got behind Robinson Cano 3-0 and walked the Yankee slugger intentionally to load the bases with one down, and a sac fly by Mark Teixeira in the next AB gave New York an early 1-0 lead before Raul Ibanez flew out to center to end a 24-pitch opening inning in the Sunday finale between the Nationals and Yankees in Nationals Park. Yankees' starter Ivan Nova successfully fielded a grounder back to the mound by Steve Lombardozzi in the first at bat of the Nationals' first and retired the side in order on eight pitches...

Adam LaRoche has a tendency to catch fire when @EJ36 pitches: atmlb.com/LYwGE0 He'll lead off, bottom 2

Backup Yankees' backstop Chris Stewart doubled by Ryan Zimmerman at third with one down in the top of the second, but Edwin Jackson retired the opposing pitcher and Derek Jeter in a relatively quick 13-pitch frame. Adam LaRoche led off of the second for the Nationals, and took a 91 mph 1-0 fastball from Ivan Nova deeeeeeep to right and over the white curly-W on the green wall at the end of the out-of-town scoreboard for his 12th HR of 2012 and a 1-1 tie in the second. The blast was LaRoche's 4th in 46 at bats in June after he hit four in 82 at bats in March/April and four in 85 at bats in May. 1-1 game after two in the nation's capital.

• Harper's Bat Comes Alive: Yankees' infielder Robinson Cano took a two-out walk in the top of the third, then took third on a two-out single by Mark Teixeira, who improved to 5 for 15 in his career vs Edwin Jackson. A groundout to second by Raul Ibanez got E-Jax out of the inning, but the 23-pitch frame had him up to 60 pitches after 3.0 IP this afternoon. Bryce Harper hit a two-out double off the out-of-town scoreboard in right, missing HR no. 8 of 2012 by just a few feet and settling for his 10th two-bagger of the year and his first hit since the third inning of Friday night's series opener against New York. Between hits, Harper was 0 for 10 with 6 K's, and he was stranded at second this afternoon when Ryan Zimmerman K'd swinging to end the third.

• E:6: Ian Desmond committed his third error in three games against New York this weekend to put the leadoff runner on in the Yankees' fourth, but Edwin Jackson picked his infielder up and retired the next three New York batters in order in a 16-pitch top of the fourth that had the Nats' right-hander at 76 pitches total on the day. Adam LaRoche just missed hitting his second HR in two at bats when he bounced a 92 mph 1-1 four-seamer off the out-of-town scoreboard in RF for his 16th double of 2012. The speed-challenged first baseman almost got thrown out at second on a strong throw in from Andruw Jones in right field, but he slid in safely and then took third one out later on a single through second by Ian Desmond. Danny Espinosa got ahead of Ivan Nova with runners on the corners, but sent a 3-1 pitch out to second where Robinson Cano and Derek Jeter turned an inning-ending 4-6-3 to keep it tied at 1-1 after four.

• 21? The Grandyman: After the Nationals came up empty in a first and third no-out opportunity in the bottom of the fourth, Yankees' center fielder Curtis Granderson took the third pitch of the fifth deep to right field and into the Nationals' bullpen for his 21st HR of 2012 and a 2-1 NY lead. Jackson gave up a one-out single to left by Robinson Cano, but got out of the fourth without further damage and the nine-pitch inning had him at 85 total after five. Nats' catcher Jhonatan Solano singled to start the Nationals' fifth, but a sac bunt, groundout and low liner to short later he was stranded at second and the Nationals were 1 for 6 w/ RISP this afternoon.

• The New "Arm"?: Edwin Jackson issued his third walk of the day to Andruw Jones in the top of the sixth, then saw the Yankees' outfielder go first-to-third when he was running on a single to center by NY catcher Chris Stewart. A sac bunt by Ivan Nova moved Stewart into scoring position with one down, but Derek Jeter's fly to center wasn't deep enough to score Jones from third as Bryce Harper showed off his arm and sent the Yankees' outfielder scurrying back to third. Two down. E-Jax went to a full count with Curtis Granderson in the next AB, and got a groundout to first to end the top of the inning and keep it close. The 25-pitch inning had E-Jax at 110 pitches overall and he was done for the day after 6.0 IP, 7 H, 2 R, 2 ER, 3 BB, 1 K, 1 HR, 110 pitches, 65 strikes, nine groundouts and six fly ball outs.

• Nice Weekend, Umps: Ivan Nova needed just five pitches to retire the Nationals in order in the bottom of the sixth, after which he was up to just 62 pitches on the day. Tom Gorzelanny took over for E-Jax and retired the first batter he faced before getting behind Robinson Cano 2-0 and giving up a long fly ball to center, over the W.B. Mason sign and into the Red Porch seats for the Yankees' second baseman's 12th HR of 2012 and a 3-1 Yankees' lead in the seventh. Mark Teixeira collected his second hit in three at bats today in the next AB, doubling down the right field line on a 2-1 four-seamer, and he took third on a groundout by Raul Ibanez before scoring on a passed ball ball four to Andruw Jones in the next at bat, though everyone watching at home says it hit Jones. 4-1 Yankees after six and a half.

• Must. Avoid. Sweep.: Ivan Nova start the seventh at 62 pitches. After a one-out walk to Danny Espinosa, the 25-year-old right-hander was up to 77. Jhonatan Solano got fans out of their seats for a second with a fly ball to left that ended up well short of the track for out no. 2, and Nova got pinch hitter Roger Bernadina swinging with a 2-2 curve to end a 25-pitch inning at 87 pitches after 7.0 IP. Nats' lefty Michael Gonzalez struck out the first two batters he faced in the Yankees' eighth, putting Curtis Granderson on in front of Alex Rodriguez, who popped up to short right to end the top of the frame. Nova returned to the mound in the eighth. Bryce Harper got hold of a 2-0 four-seamer and sent a one-out single back up the middle for his second hit in four at bats today. Nova popped Ryan Zimmerman up for the second out of the inning, and the Yankees' starter was done for the day after 7.2 IP, 7 H, 1 R, 1 ER, 1 BB, 4 K's, 1 HR, 97 P, 64 S, 10/5 GO/FO. Boone Logan took over on the mound and popped up Adam LaRoche to end the eighth and preserve the Yankees' 4-1 lead.

• Mark Teixeira doubled off Nats' lefty Sean Burnett with one down in the top of the ninth, but was stranded at second when the reliever completed a scoreless 12-pitch frame. Yankees' closer Rafael Soriano got the first out of the Nats' ninth with one pitch to Michael Morse. Ian Desmond K'd swinging. Danny Espinosa grounded out to second, and the Nationals got swept. Yankees take three straight. 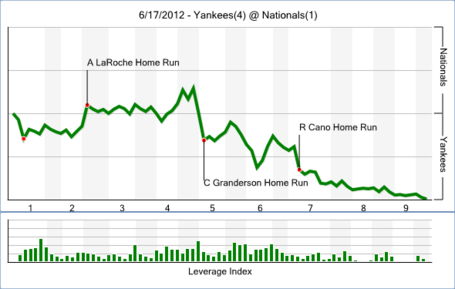