• Lefty vs Sinkerballer: The Washington Nationals entered play today with a .235/.294/.393 line as a team against left-handed pitchers. The last one they faced, the Yankees' Andy Pettitte, held the Nats' batters to two runs on five hits in 7.0 innings of New York's 5-3 win on Saturday afternoon. Tonight's starter for the Tampa Bay Rays, lefty David Price, took the mound in the bottom of the first in Nationals Park with a 1-0 lead...

• That Run: Chien-Ming Wang's an extreme ground ball pitcher. The 32-year-old right-hander got three ground balls from the first three batters he faced tonight in his fourth start of 2012, but they were all smoked and each got through the infield as Rays' leadoff man and left fielder Desmond Jennings, first baseman Carlos Pena and center fielder B.J. Upton hit back-to-back-to-back singles to bring in the first run of the game before Wang had recorded an out. The fourth ground ball of the game got the Nats' starter a 4-6-3 DP off the Rays' right fielder Matt Joyce's bat and a fly to left ended a 26-pitch opening frame by Wang.

• RSD: "Right Side Danny Espinosa lined a high 95 mph 2-2 fastball from Price to left-center for a leadoff single in the Nationals' first. The Rays' lefty needed just three pitches, all fastballs at 96-96 and 97 mph to get Bryce Harper swinging in the first career at bat for the 2010 no.1 overall pick against the pitcher taken no.1 overall in 2007. Espinosa stole second, took third on a groundout by Ryan Zimmerman and scored on an error on a Michael Morse grounder. Morse hit a ground ball to third that Will Rhymes fielded, but the Rays' third baseman bounced a throw to Carlos Pena that the Rays' first baseman couldn't handle. E on Pena apparently. 1-1 game after one and a half. Chien-Ming Wang gave up another ground ball single by the first batter in the Rays' second, catcher Jose Lobaton, but the Nats' right-hander retired the next three batters in order in a relatively quick 13-pitch inning.

• GEICO: Ian Desmond got hold of a 1-1 change up and out over the plate from Price and the Nats' shortstop took it for a ride to center and over the wall just the left of the GEICO sign in Nats Park. Desmond's 11th HR of 2012 gave the Nationals a 2-1 lead and topped his previous career high of 10 HR's in 154 games and 574 plate appearances in 2010. Desmond's 11th this year came in his 64th game 286th trip to the plate. 11 HR's on the year, a year after he hit a total of eight in the entire 2011 season (154 G/639PA). 2-1 Nationals after one and a half. Given a lead to work with, Chien-Ming Wang walked the first batter he faced in the top of the third, putting Desmond Jennings on in front of Carlos Pena. The Rays' slugging first baseman got hold of an 0-1 sinker and sent it soaring out to center for a two-run HR and a 3-2 lead.

• Sink-Less: After Pena's 9th HR of 2012, B.J. Upton hit his 12th double of the year to right for the sixth hit of the game off Wang. The Rays' CF took third on a groundout by Matt Joyce, but he was running on contact and thrown out at home when Ian Desmond fielded a grounder off Ben Zobrist's bat and threw a strike to Jesus Flores to get the Rays' outfielder at the plate. Two down, but a two-out walk to Jose Lobaton and two-run triple by Eliot Johnson follow and the Rays go up 5-2 over the Nationals. Chien-MIng Wang's up to 65 pitches, having given up seven hits and five runs all earned in the first 3.0 IP.

• Zim?: After striking out on three pitches in his first at bat tonight, Bryce Harper drew a one-out walk out of the Rays' David Price in his second AB of the game in the bottom of the third. Harper was quickly erased, however, as Ryan Zimmerman grounded into an inning-ending 6-4-3. The 10th GiDP of 2012 for the Nats' third baseman.

• Davey's Choice: Chien-Ming Wang walked the opposing pitcher in a seven-pitch at bat to start the Rays' fourth, and after Wang managed to strike Desmond Jennings out, Davey Johnson came to the mound to lift the right-hander in favor of 26-year-old lefty Ross Detwiler. Wang's Line: 3.1 IP, 7 H, 5 R, 5 ER, 3 BB, 1 K, 1 HR, 77 P, 45 S, 4/2 GO/FO. Detwiler came out strong, throwing a 96 mph 0-2 sinker for a called strike three on Carlos Pena before dropping a 1-2 bender on B.J. Upton for a swinging K and the final out of the fourth. Still 5-2 Rays.

• Detwiler Rolling: Michael Morse singled to start the Nats' fourth, but a line drive back to David Price off LaRoche's bat led to an easy 1-3 DP. A groundout to second ended a six-pitch inning by the Rays' left-hander, who was up to 54 pitches after four innings in the nation's capital. Ross Detwiler retired the Rays in order in the top of the fifth, setting five straight Tampa Bay batters in-a-row down after taking over for Chien-Ming Wang. 20 pitches, 17 strikes. Detwiler battled for seven pitches in a two-out AB vs Price before grounding out to end the Nats' fifth. Eliot Johnson battled Detwiler for eight of the seventeen pitches he threw in the sixth before grounding out to short to start what ended up being a 17-pitch, 1-2-3 inning by Detwiler, after which the Nats' lefty had retired eight-straight Rays. Still 5-2 Tampa Bay in the sixth.

• BEAST MODE ENGAGE!!: Ryan Zimmerman was 0 for 2 against Price when he hit a two-out single through short in the bottom of the sixth. Michael Morse stepped in with a runner on and crushed a 97 mph first-pitch fastball, taking it to the opposite field and over the out-of-town scoreboard for his first HR of 2012. They reviewed it since it hit the top of the wall, but it's still a HR after they look. An Oppo-boppo blast and a one-run game after Morse's first HR of 2012. The Nats' two-out rally makes it 5-4 Rays and Price was up to 85 pitches after six in Nats Park.

• Moar Det: Desmond Jennings flew out to right to start the seventh as Ross Detwiler set down the ninth-straight batter since he took over for Wang. A HBP on Carlos Pena put the first Rays' runner on since the fourth, but the Nats' left-hander popped up the next two batters and completed an 11-pitch inning. 3.2 scoreless IP in relief on 48 pitches, 36 strikes. The Nationals went down in order in the bottom of the seventh, with Price retiring Ian Desmond, Tyler Moore and Jesus Flores to end the inning at 98 pitches overall.

• Michael, Not Mike: Davey Johnson went to the bullpen in the eighth, bringing Michael Gonzalez on, but the veteran left-hander gave up a leadoff walk to Ben Zobrist and a single by Jose Lobaton to put two on with no one out. A groundout by Eliot Johnson advanced both runners into scoring position, but Gonzalez struck Drew Sutton out and got a groundout from Hideki Matsui to end the top of the eighth and keep the Nats within one.

• Old School Cheatin': Former National Joel Peralta: With the score 5-4 after seven and half, the Rays turned to former Nationals' reliever Joel Peralta, but before the right-hander could throw a pitch, Nats' skipper Davey Johnson had a chat with home plate umpire Tim Tschida. Rays' manager Joe Maddon came out to join the conversation which then moved to the mound. The umpires asked the reliever for his glove, which was confiscated by the officials. And they must have found something because Peralta was ejected. "A foreign substance on or in his glove," according to reports from the press box. Peralta doffed his cap to the Nats' dugout as he leaves the field of play. LHP Jake McGee came on instead and retired the Nationals in order in an eight-pitch inning. Still 5-4 Rays.

• Rally?: Ryan Mattheus recorded the first two outs of the ninth before Rays' manager Joe Maddon asked the home plate ump to examine his hat and glove. Nothing was found and the right-hander struck B.J. Upton out to end the top of the inning. Rays' closer Fernando Rodney came on in the ninth, retiring Ryan Zimmerman on a groundout to first. Michael Morse at a 2-2 change for out no.2. Adam LaRoche got up 2-0 on the Tampa Bay right-hander, but hit a 2-2 fastball to first for the final out of the game. Rodney earns his 20th save. The Nats drop their fourth straight on the homestand.

• Doghouse's Post Game WPA Graph: "Game 65: There seems to be a weak spot in the rotation": 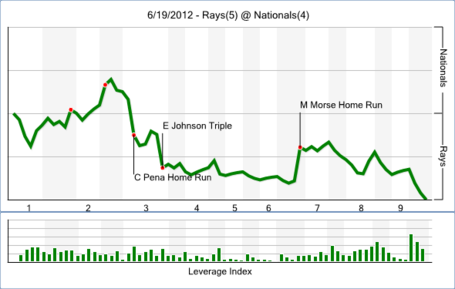