• Strasburg Back Being Strasburg Early: Michael Bourn wasn't looking for a 98 mph 0-2 fastball, or at least didn't think the pitch was a strike, but home plate umpire Derryl Cousins gave Stephen Strasburg the outside edge and called it strike three, ringing up Atlanta's leadoff man in the first at bat of the top of the first this afternoon. Martin Prado couldn't reach a 2-2 curve in the dirt that came in at 83 mph and fell out of mid-air a pitch after the Braves' third baseman had managed to foul off a 99mph four-seam fastball. Braves' backstop Brian McCann chased another two-strike curve into the dirt, swinging over an 83 mph 2-2 bender inside for strike three and the final out of a 14-pitch, 10-strike opening frame for the Nats' 23-year-old right-hander in the nation's capital. Michael Morse received a standing ovation from the D.C. faithful when he stepped to the plate with two on and two out in the Nationals' first, but Braves' right-hander Brandon Beachy got a groundout to debuting shortstop Andrelton Simmons to end his own scoreless first after 18 pitches.

• MOAR K's!!: Strasburg got a called strike with a 91 mph 2-1 change to Dan Uggla, (who entered action today 6 for 8 in his career vs Strasburg), then followed that up with an 83 mph curve that fell in for a called strike three on the Braves' stunned second baseman. Four straight K's to start the game for Strasburg, and six in-a-row set down after both Freddie Freeman and Jason Heyward (on a 3-0 pitch) grounded out to second to end a 13-pitch inning by the Nats' right-hander. Brandon Beachy struck out the side on 19 pitches in the Nationals' second, matching Stephen Strasburg with two scoreless frames.

• Constanza!!!: Ryan Zimmerman did his thing, charging, fielding and throwing from down low to first in time for the out on a weak grounder toward third by Braves' shortstop Andrelton Simmons. Seven-straight set down. Make that eight, as Strasburg struck the opposing pitcher out with a 98 mph 2-2 heater. Eight in-a-row set down, 5 K's. ATL left fielder Jose Constanza ended any hope of a no-hitter for Strasburg, however, when he drove a 99 mph 1-2 fastball by third and into left field for a two-out hit in the top of the third. The speedy Braves' outfielder took third on another single to left by Michael Bourn, but both runners were stranded when Strasburg popped Martin Prado up to end a 20-pitch inning with the score still 0-0 in D.C.

Bryce Harper battled in an 11-pitch, two-out at bat in the bottom of the third, and drew his second walk in two at bats vs the Braves' Brandon Beachy in which the 19-year-old Nats' outfielder saw a total of 19 pitches. Atlanta's starter was up to 62 pitches total when Ryan Zimmerman grounded into a force at second to end the Braves' starter's third scoreless and hitless inning against the Nationals.

• No No-No For Beachy: A 2-1 curve got Stephen Strasburg a weak grounder to second off of Brian McCann's bat for the first out of the fourth, and the Nats' right-hander got both Dan Uggla and Freddie Freeman swinging in three-pitch AB's that had the starter through 4.0 scoreless on 56 pitches after a quick, 10-pitch, 1-2-3 frame. Ian Desmond beat out a slow roller to second for an infield single and the Nats' first hit off Brandon Beachy with two down in the fourth, but Danny Espinosa K'd swinging through a high 91 mph heater to end the Braves' right-hander's own scoreless fourth. 77 pitches through four for Beachy. Stephen Strasburg started the fifth at 56 pitches...

• Jesus Is Clutch: Braves' right fielder Jason Heyward took Strasburg's 63rd pitch, a full-count change, to right field off Nats' first baseman Adam LaRoche's glove for a leadoff single in the fifth, but a 6-4-3 DP off Andrelton Simmons' bat erased the leadoff runner and Strasburg got the opposing pitcher swinging to complete a 14-pitch frame and his fifth scoreless inning. Beachy started the bottom of the fifth at 77 pitches. The 82nd pitch of the day was a 91 mph 1-2 fastball to Jesus Flores that landed in the visitor's bullpen some 377ft+ from home as the Nats' backstop collected his second HR of 2012 and gave the Nationals a 1-0 lead after five.

• Strasburg, Stephen Strasburg: A nine-pitch, 1-2-3 6th had Strasburg at 79 pitches total up 1-0 over Atlanta in the sixth. Brandon Beachy started the bottom of the inning at 91 pitches. Michael Morse worked the count full in his two-out at bat, but grounded out to short to end a 12-pitch, 1-2-3 bottom of the inning for the Braves' right-hander. Brian McCann hit a bloop single to left for a leadoff hit in the top of the seventh, but one pitch later Stephen Strasburg had two outs after Dan Uggla hit into a 6-4-3 DP and when Freddie Freeman K'd swinging, the Nationals' right-hander had 7.0 scoreless in the books, 9 K's on the day and 90 pitches on his arm after an 11-pitch frame. 1-0 Nationals after six and a half in D.C.

• Xxxxx: Danny Espinosa's one-out walk in the seventh ended Brandon Beachy's day after 6.1 IP, 3 H, 1 R, 1 ER, 4 BB's, 6 K's and 115 pitches. Braves' reliever Chad Durbin issued the second consecutive walk to Jesus Flores bringing up Roger Bernadina, who hit for Stephen Strasburg: 7.0 IP, 4 H, 0 R, 0 BB, 9 K's, 90 pitches, 59 strikes, 8/1 GO/FO. The Braves went to the pen again for left-hander Jonny Venters. Nats' skipper Davey Johnson countered with Xavier Nady, who was up when the Braves' lefty crossed Brian McCann up and hit him square on the knee with a 90 mph fastball that went right by the catcher's mitt. Venter was throwing to a new catcher when Xavier Nady worked the count full and doubled to right to bring Espinosa in for a 2-0 Nats' lead after seven.

• Burn and Clipp? Burnppard? Clip and Burn?: Nats' lefty Sean Burnett retired the first two batters he faced in the eighth before Matt Diaz reached safely on an infield single deep in the hole at short. Jose Constanza singled in the next at bat, rolling a swinging bunt toward third on which Burnett had no chance to make a play. 2 on, 2 out for Michael Bourn, who flew to left to end the top of the eighth with the score still 2-0 Nationals. 18-pitch scoreless eighth for Burnett. Braves' right-hander Cristhian Martinez set Ryan Zimmerman, Adam LaRoche and Michael Morse down in order in the Nats' eighth and it was up to Tyler Clippard to close it out in front of 41,042. Martin Prado popped a 94 mph 0-2 fastball up to short right, ONE!! David Ross K'd swinging through a 93 mph heater. TWO!!! Dan Uggla got a 2-2 change and didn't have a chance. Save no.4 for Clippard. 2-0 Nationals win.

• Doghouse's Post Game WPA Graph: "Game 51: THIS was worth coming back from vacation!": 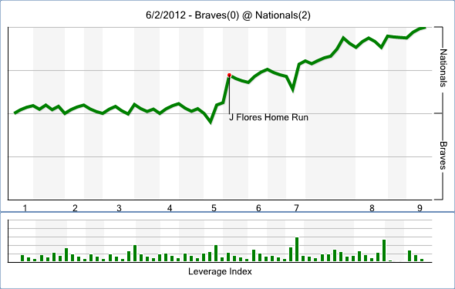