• Strasburg Stops Streaks: An 82 mph 2-2 curve got Tampa Bay outfielder Desmond Jennings swinging for the first out of the opening inning this evening in the second game of three for the Rays in D.C. A 1-2 change got a swinging strike three from Carlos Pena for out no.2 of the top of the first, but Nats' right-hander Stephen Strasburg missed with a 3-1 change to B.J. Upton, issuing a 2-out walk to the Rays' center fielder before Hideki Matsui grounded out to short to end a 17-pitch, 10-strike frame in Nats Park. 23-year-old Tampa Bay right-hander Chris Archer is one of four players the Rays acquired in the January 2011 deal that sent Matt Garza to Chicago. Chicago had acquired the former Cleveland Indians' '06 5th Round pick as one of three prospects they received in return for Mark DeRosa in a December '08 trade that sent the currently-DL'd Nationals' utility man to Cubs.

Chris Archer was making his MLB debut tonight in the nation's capital. The first three pitches of Archer's MLB career were balls.

• Lombo + Harper = Lead: Steve Lombardozzi took a 3-0 fastball for a strike then laced a 3-1 pitch to right for a leadoff double in the Nats' half of the first. Bryce Harper singled to center in the next at bat and Nats' third base coach Bo Porter sent Lombardozzi home where he scored ahead of a throw in from Upton to give Washington an early 1-0 lead. Harper tried to take third aggressively on a Ryan Zimmerman grounder to short, and Tampa Bay SS Sean Rodriguez threw it away and the Rays let it roll into the dugout allowing Harper to score and Zim to take second. Zimmerman then took third on a wild pitch by Chris Archer. Adam LaRoche K'd looking for the first out of the inning though, and Michael Morse grounded unproductively to short, but Ian Desmond came through with a two-out single and the Nationals took a 3-0 lead into the second...

• Jose? Molina?: Stephen Strasburg got one out with one pitch when Ben Zobrist lined to first to start the second. Eliot Johnson K'd swinging at a filthy 1-2 curve in the dirt for out no.2 and K no.3. Rays' catcher Jose Molina disrupted Strasburg's flow, however, taking a 97 mph 2-0 fastball to left, over the visiting team's bullpen and into the stands for a 380-90ft, two-out solo HR. 3-1 Nationals. Four pitches later Sean Rodriguez K'd swinging at a 1-2 change and Strasburg completed his second inning at 30 pitches overall after a 13-pitch frame. After a long first, the Rays' Chris Archer retired the Nats in order in a 13-pitch, 1-2-3 second. 3-1 Nats after two.

• All w/ 2 outs: Stephen Strasburg missed with a 3-2 fastball to Carlos Pena, issuing his second two-out walk of the game in Tampa Bay's third. Strasburg buckled B.J. Upton's knees with a 1-2 bender that fell in for a called strike, but then gave up a two-out line drive single left by the Rays' center fielder. Hideki Matsui got ahead 3-1, fouled off a 96 mph two-seam fastball and then sent a full-count change bouncing by second and into right for an RBI single. 3-2 game. Strasburg was up to 27 pitches in the inning after the second two-out hit, but four pitches later he got Ben Zobrist swinging to end a 31-pitch 3rd at 61 pitches overall.

• Bryce Harper took a leadoff walk in the Nationals' third, but Ryan Zimmerman grounded into his NL-leading 11th double play of the year in the next at bat to erase the leadoff runner. (Zim's tied for the lead in GiDP's w/ the Reds' Brandon Phillips). A called strike three on Adam LaRoche ended a 13-pitch 3rd by the Rays' right-hander who settled in nicely after a shaky start. After grounding into a DP in the bottom of the third, Zim picked up his glove and picked up a swinging bunt from Rays' infielder Eliot Johnson before unleashing a trademark sidearm throw to LaRoche at first for the first out of the fourth. A pop to short by Jose Molina and a swinging K by Sean Rodriguez followed and Strasburg was through a quick nine-pitch top of the inning with 6 K's overall.

• Sterling Archer: Chris Archer needed just 11 pitches to retire the Nationals in order in the bottom of the fourth. Strasburg gave up a one-out single in the top of the fifth on a 97 mph first pitch fastball to Desmond Jennings that fell in in front of a diving Bryce Harper in center. Harper caught it on a hop as he dove but couldn't make the play. A 3-2 change got Carlos Pena swinging for out no.2 and a fly to left-center by B.J. Upton ended the top of the inning. The Nationals went down in order in the bottom of the frame, and Archer had retired 12 of 13 batters since he last allowed a hit in with two out in the first. Hideki Matsui K'd swinging to start the 6th. Strasburg's 8th K in 5.1 IP. Ben Zobrist grounded out to second for out no.2, but Eliot Johnson extended the sixth with a two-out sing-- Johnson took second on Harper, who sailed the throw in. Johnson was running in the next at bat too when Jose Molina lined to short left, but Steve Lombardozzi charged in and dove to catch the third out of the sixth and preserve the Nats' lead. 3-2 D.C. after five and a half. "Limber Lunging Lombo Latches on Lofting Liner..." - Miss B.

• 10, Count'em 10 K's: The Rays' Chris Archer retired the Nats in order again in the sixth, setting the ninth, tenth and eleventh straight Nationals down after Bryce Harper's leadoff walk in the second. The four-pitch frame had the debuting right-hander at 82 pitches, 49 strikes in 6.0 IP over which he allowed 3 hits, 3 runs, 2 earned and one walk while striking out seven Nationals overall. Stephen Strasburg started the seventh at 99 pitches, and had one out after pitch 100 of the night when Sean Rodriguez flew out to center on a first-pitch fastball. Rays' pinch hitter Will Rhymes K'd swinging at a 1-2 change in the next at bat for out no.2 and K no. 9 and the Nats' right-hander collected K no.10 on the night with a 95 mph full-count fastball to Desmond Jennings that got the Rays' outfielder swinging for out no.3.

• Joel "Pine Tar" Peralta: Rays' reliever Burke Badenhop retired the Nationals in order in the seventh, setting batters no. 12, 13 and 14 in a row down after Bryce Harper's leadoff walk in the third. The Nationals were hitless going back to the first with 18 of 19 retired after Ian Desmond's 2-out single in the first. Sean Burnett took over for Strasburg in the eighth, and gave up a leadoff single by Carlos Pena. A fly to right and a 6-4-3 DP later, the Nats' lefty was through a 13-pitch eighth with the lead in tact. Still 3-2 D.C. With one down in the Nats' eighth, Joel Peralta took the mound for the Rays. Peralta got Rick Ankiel swinging with an 0-2 splitter for out no.2 and Roger Bernadina grounded out to short to end the eighth. 21 of 22 Nationals retired going back to the .... ah, you get it. The Nats' offense was awful.

• Clipp'd: Tyler Clippard took the mound in the top of the ninth looking for save no. 10 in 10 opportunities since taking over as closer. A 93 mph fastball to Ben Zobrist got the Rays' infielder swinging ONE!!! Eliot Johnson battled for eight pitches and then lined out to left. TWO!!! Jose Molina, who homered off Strasburg, K'd swinging to end it. 1-2-3 the Nationals win. Strasburg's 9th win. Clippard's 10th save and the end of the four-game losing streak. Who needs offense... 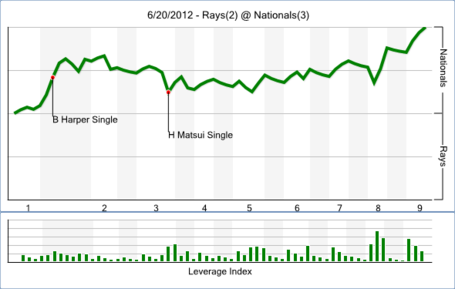