Share All sharing options for: Washington Nationals Take Two Of Three From The Tampa Bay Rays With 5-2 Win On Danny Espinosa Double.

• Throw More Strikes!: Washington Nationals' lefty Gio Gonzalez got behind 3-1 in the first at bat of the game in Nationals Park tonight and threw a 93 mph two-seamer to Tampa Bay's Desmond Jennings that the 25-year-old Rays' outfielder lined to Ian Desmond at short. Gonzalez missed with all four pitches to Carlos Pena in the second AB, but popped B.J. Upton up with a first-pitch fastball before uncorking a wild pitch in the next at bat that allowed Pena to take second with Ben Zobrist at the plate. Zobrist battled for seven pitches, but rolled one out to short. Grounder. Desmond. Out. 17-pitch, seven-strike scoreless first for Gio Gonzalez. Rays' lefty Matt Moore needed just eight pitches to retire the first three Nationals he faced in order in the bottom of the inning in the nation's capital, 0-0 after one.

• Gio vs Blaser: Hideki Matsui took a six-pitch walk in the first at bat of the second, but an eight-pitch at bat with Rays' shortstop Sean Rodriguez ended in Nationals' lefty Gio Gonzalez's first K of the night and his 98th K of 2012. Matsui took a wide turn around second before returning to the bag on catcher Jose Lobaton's one-out single through short and then took third on Tampa Bay third baseman Drew Sutton's single to center. Bases loaded with one out. Gonzalez threw a 94 mph fastball by the opposing pitcher for the second out and his second K, but Desmond Jennings took a 1-1 curve through second and into right for a two-out RBI single and a 1-0 Rays' lead. The Nats' left-hander was at 27 pitches at that point, and six pitches later he'd struck Carlos Pena out to end a 33-pitch second down 1-0 at 50 pitches in 3.0 IP. And Gio Gonzalez wasn't happy with home plate umpire Cory Blaser and the Nats' lefty let him know as he walked off the mound and headed in to the Nationals' dugout.

• 5-Pitch 3rd: Matt Moore got a weak grounder to the mound from Michael Morse and got a swinging K with a brutal 3-2 change to Ian Desmond for the first two outs of the Nats' third, but he issued a two-out walk to Tyler Moore and gave up a two-out single by Xavier Nady to bring Jesus Flores up with two on. Flores' grounder to third should have been out no.3 but Drew Sutton bobbled it and let the Nats load the bases for Gio Gonzalez, who K'd swinging on three pitches from the Rays' left-handed starter. 31-pitch inning for Matt Moore, who was up to 39 pitches after two. Gio Gonzalez got two outs with three pitches in the top of the third, and got out no.3 two pitches later for a five-pitch inning after a 33-pitch second.

• "Right Side": Danny Espinosa got ahead 3-0 and walked on four pitches from Rays' lefty Matt Moore in the first at bat of the Nationals' third. Bryce Harper walked on six pitches to put two on with no one out. Moore threw two mid-90's fastballs by Ryan Zimmerman to get up 0-2, and got him looking with a 1-2 change that Zim took for a called strike the Nats' third baseman thought was a ball. After Zim K'd, Espinosa and Harper advanced themselves on a successful double steal so a Michael Morse fly to center was deep enough to bring Espi in to tie it. 1-1 game with two down after some aggressive baserunning by the Nats. Ian Desmond ripped a 1-1 slider through the middle of the infield to bring Harper around for the second run of the inning and more aggression by Desmond had the shortstop sneakily taking second as Carlos Pena wandered absent-mindedly in back of the mound. 2-1 Nationals. The third walk of the inning for Moore put two runners on for Xavier Nady, but the veteran outfielder flew to center to end a 30-pitch inning by the Rays' left-hander.

• +Range, +GG3B: Right Side Danny Espinosa connected for his 15th double of 2012 with two down in the Nats' fourth, but Bryce Harper flew out to end an 11-pitch inning that had the Rays' Matt Moore at 80 pitches overall and down 2-1 after four. Ian Desmond showed off his range getting to a hard-hit grounder off Desmond Jennings bat, fielding it near second, spinning and sending a one-hop throw to first that Tyler Moore was able to pick. Gio Gonzalez got a fly to left from Carlos Pena and then it was Ryan Zimmerman's turn to scoop up a broken bat grounder by B.J. Upton and make a sidearm throw to first to end an 11-pitch 5th by the Nationals' starter. 10 of the last 11 set down by Gonzalez following Desmond Jenning's two-out single in the second.

• Oh, Zim: Ryan Zimmerman K'd looking for the second time in three at bats in the first AB of the Nats' fifth (0 for 3 with 3 K's, 2 backwards). One pitch later, Matt Moore had two outs after Michael Morse hit a first-pitch slider out to Sean Rodriguez at short. Ian Desmond battled Moore for seven pitches but K'd swinging to end an 11-pitch frame with the Rays' lefty's 6th K. 2-1 Nationals after five in Nats Park. Gio Gonzalez started the sixth at 79 pitches. His 80th pitch of the game was lined to left by Ben Zobrist, who double for the 13th time this year to start the top of the inning. A fly to right by Godzilla, aka Hideki Matsui, moved Zobrist to third with one down, and the Rays' infielder scored from there on a Sean Rodriguez single that tied it at 2-2 in the sixth inning in Nats Park. Gio Gonzalez threw a 96 mph fastball by Eliot Johnson for the final out of a 19-pitch inning that had him at 98 pitches overall after 6.0 IP.

• "Left Side Danny?": Tyler Moore battled Joel "Pine Tar" Peralta for 11 pitches before flying out to right in the first at bat of the Nats' 6th. Jesus Flores doubled for the sixth time this season with two outs in the inning, taking an 0-1 curve to left and off the Twisted Tea sign on the outfield wall to bring Adam LaRoche to the plate. An intentional walk to LaRoche brought Danny Espinosa up, and the Nats' second baseman took it personally and lined to right (from the left side?!?!?!?) to drive in two runs and give the Nationals a 4-2 lead. Espinosa's second double of the game, one from each side and his 16th double of 2012. Two-run lead for the Nats after six.

• +Fireworks: Nats' right-hander Craig Stammen gave up a six-pitch leadoff walk to Desmond Jennings in the top of the seventh, then let the speedy Rays' outfielder steal second. 10 SB in 11 attempts for Jennings this year, but Stammen popped Carlos Pena up for an unproductive first out. B.J. Upton popped to short for out no.2 and Stammen went to a full count with Ben Zobrist with the runner still at second. A two-out walk to Zobrist ended Stammen's night as Davey Johnson brought Michael Gonzalez out to face Hideki Matsui. Gonzalez battled Matsui for seven pitches, but walked him to load the bases, then the Nats turned to Ryan Mattheus and the Rays replaced Sean Rodriguez with Will Rhymes. Mattheus threw the Rays' infielder a 92 mph dramatically diving/sinking full-count fastball and got an inning-ending strikeout to leave the bases loaded. Still 4-2 D.C.

• Don't Make Zim Angry: Ryan Zimmerman didn't like the call on a 2-1 fastball from Wade Davis, and he let the home plate ump know, then went down for a low 95 mph heater and punched a leadoff single through the right side. Michael Morse thought a 2-2 fastball inside was too inside and ball three but Cory Blaser rung him up for the first out of the frame. Ryan Zimmerman stole second, sliding in safely with his 3rd SB of the year, and he scored from there one at bat later after Rick Ankiel walked and Roger Bernadina doubled to left on a first-pitch curve. [CHOMP!] 5-2 game, but Ankiel's thrown out at home on an ill-advised attempt to score. Sean Burnett needed just nine pitches to retire the Rays' batters in order and the Nationals were up 5-2 after seven and a half.

• Clipp'd: Rays' lefty J.P. Howell retired the Nationals in order in the bottom of the eighth and Tyler Clippard came on looking for his 11th save in 11 opportunities in 2012. Desmond Jennings flew out to Rick Ankiel center. ONE!!!! Carlos Pena flew to right on a two-strike change. TWO!!!!! B.J. Upton got behind 0-2 and ended up striking out swinging at a 1-2 heater. Clippard's 11th. The Nats' 40th and the 2-1 series win over the Rays. 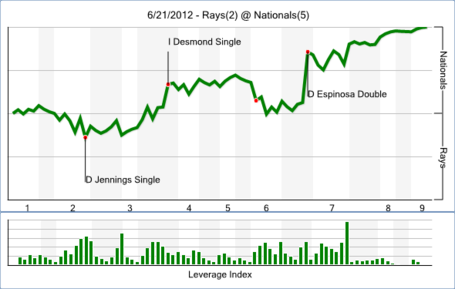 *(Note: Clutch does not exist.)