• DH = Abomination: The threat of rain delayed the start of tonight's game by an hour though no rain actually fell in Orioles Park at Camden Yards (At least not before the game.) At just after 8:06 pm EDT, an hour and one minute after the scheduled start time, the Washington Nationals and Baltimore Orioles began the first game of the final Interleague series of the year for both teams. O's right-hander Jason Hammel retired the Nats in order in a 14-pitch top of the first, getting ground balls from Steve Lombardozzi, Bryce Harper and Ryan Zimmerman in a quick opening inning. Jordan Zimmermann left a 1-1 slider up outside that Orioles' infielder Brian Roberts sent to left for a leadoff single, but three batters later he was stranded at first as the Nationals' right-hander popped the next three O's up to start his 14th start of 2012 with a 12-pitch scoreless first in Baltimore. 0-0 after one in Camden Yards.

• Two-Out HR, "One Bad Pitch": Michael Morse went the other way with a first pitch fastball and recorded his fifth double of 2012 when Orioles' right fielder Chris Davis dove for the fly to right and missed. O's right-hander Jason Hammel, who got Adam LaRoche to chase a two-strike curve in the dirt for out no.1 of the second and K no.1 of the night, recorded his second strikeout of the inning in the next at bat against Ian Desmond before dropping a 1-2 curve in for a called strike three on a completely fooled Danny Espinosa. 14-pitch second by Hammel, who strikes out the side. Orioles' catcher Matt Wieters lined to center for the second leadoff single for the O's in two innings against the Nats' Jordan Zimmermann, but the Nats' right-hander got a grounder to first out of Wilson Betemit and a nicely turned 3-6-1 DP for the first two outs. Three pitches later, however, Zimmerann left a 1-1 fastball up inside to Mark Reynolds and the Orioles' took a 1-0 lead on a line drive to left by the slugging first baseman that landed 20 rows back in the left field stands. Reynolds' 6th of 2012. 1-0 Baltimore after a 16-pitch second for Zimmermann.

• Lombo Hustle, Zimmermann Heat: Mark Reynolds bobbled a two-out grounder to first and tossed to pitcher Jason Hammel who bobbled the ball and let Steve Lombardozzi on with two down, but the Orioles' starter got a fly to center from Bryce Harper to complete his third scoreless frame after 12 pitches, leaving him at 47 pitches overall after 3.0. Jordan Zimmermann left another hanging breaking ball up for O's outfielder Steve Pearce and gave up another leadoff hit, this one a double to left. Two flies to right later, Jordan Zimmermann had two down without the runner advancing, and after he threw a 95 mph 1-2 fastball by Chris Davis he was up to 44 pitches overall following a 16-pitch 3rd.

• + Arm, +Range, +Hustle: Ryan Zimmerman K'd looking at an 0-2 fastball from O's starter Jason Hammel, striking out for the first time tonight and the 4th time in his last six at bats. After Michael Morse K'd swinging for out no.3 of the Nats' fourth, Hammel had 6 K's on the board in 4.0 scoreless innings. Jordan Zimmermann needed just 11 pitches to retire the Orioles in order in the bottom of the fourth after which both starters were up to 55 pitches, with a matching 37 strikes each. Still 1-0 O's. Ian Desmond singled to center to start the Nationals' fifth with the Nats' second hit off Hammel. One out later, Desmond was running as Roger Bernadina grounded to third baseman Wilson Betemit and Desmond took third on the play after Betemit checked him and threw to first, but the throw back to third by Mark Reynolds got away from the O's allowing Desmond reach safely and score to tie it at 1-1 after four and a half.

• Don't Hit Glass Nick: After popping Mark Reynolds up with one pitch, Jordan Zimmermann hit Nick Johnson to put a runner on with one out. Zimmermann got out no.2 with one pitch to Steve Pearce, but gave up a two-out single by Brian Roberts on which Nick Johnson went first-to-third. A 1-0 fastball up and in to J.J. Hardy was then lined to left-center and the second of two two-out hits brought Nick Johnson in from third. Hardy's 14th double of 2012 made it 2-1 O's after five innings. Jason Hammel gave up a leadoff single to center by Steve Lombardozzi in the Nationals' sixth, but three batters and two K's later the Orioles' starter was through a 10-pitch frame at 74 pitches overall on the night.

• #'s: Adam Jones lined a first-pitch fastball to right for the O's seventh hit of the night off Jordan Zimmermann to start the bottom of the sixth, but the seventh pitch to Matt Wieters in the next AB resulted in a 4-6-3 DP. The 11th pitch of the inning came back at Zimmermann off Wilson Betemit's bat and bounced off the pitcher's heel for an infield single. With a runner on first, Zimmermann got Mark Reynolds swinging with the 16th pitch of the inning and he was at 88 pitches overall with two K's after 6.0 IP in Camden Yards. Still 2-1 O's.

• Hammel W/ 10: Jason Hammel dropped a brutal 2-2 bender on Michael Morse for K no. 9 on the night. An 0-1 breaking ball to Ian Desmond was lined to right, however, for Desmond's second and the Nationals' fourth hit of the game off the Orioles' starter. Danny Espinosa lined weakly to right for hit no. 5 off Hammel and there were two runners on when Roger Bernadina stepped in. The Shark K'd swinging at a 1-2 slider inside for out no.2 and K no.10, tying a career high by the O's right-handed pitcher. 2 on, 2 out for Jesus Flores, and the Nats' backstop lined a 2-2 pitch to short that J.J. Hardy leapt for and grabbed. Robbed. 2-1 O's after six and a half. Jordan Zimmermann walked Nick Johnson to start the O's seventh. O's outfielder Steve Pearce bunted the runner over/gave up an out, but Brian Roberts flew out to left and J.J. Hardy grounded back to the mound. Still 2-1 Orioles after Zimmermann's 13-pitch seventh.

• Fireworks: Ryan Mattheus took over in the bottom of the eighth after Jason Hammel retired the Nationals in order on five pitches in the top of the frame. The O's connected on a few pitches from the Nats' reliever but Mattheus completed a scoreless nine-pitch inning to take it to the ninth with the Orioles still up 2-1. O's closer Jim Johnson took over in the top of the ninth looking for his 21st save of 2012. Adam LaRoche flew to right on the first pitch of the inning. Michael Morse grounded to third for out no.2 on a slick fielding play by Wilson Betemit. Ian Desmond took a two-out walk from the Orioles' right-handed reliever, but Danny Espinosa lined back to the mound to end the game. 2-1 Orioles win. Nats drop the first of three in Baltimore. 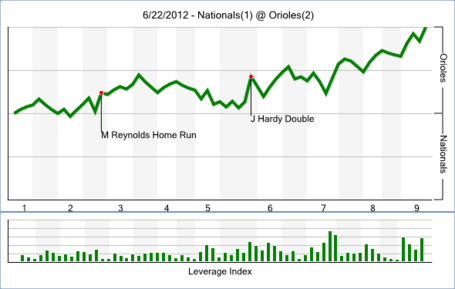