Washington Nationals 3-1 Over Baltimore Orioles As Edwin Jackson And The Nats' Pen Dominate At Camden Yards.

Share All sharing options for: Washington Nationals 3-1 Over Baltimore Orioles As Edwin Jackson And The Nats' Pen Dominate At Camden Yards.

• 1-3: Bryce Harper heard boos in each of his at bats last night and did again as he stepped to the plate to face Baltimore lefty Wei-Yin Chen with one down in the first of the second of three for the Washington Nationals in Orioles Park at Camden Yards this weekend. The Nats' 19-year-old outfielder had the crowd buzzing though, after he slid into first headfirst on a soft grounder to Orioles' third baseman Wilson Betemit. Harper arrived just as first baseman Mark Reynolds was picking Betemit's low throw out of the dirt and was called out (though he appeared safe upon review.) The O's left-handed starter completed an 11-pitch, 10-strike top of the inning when Reynolds snared a hard-hit grounder off Ryan Zimmerman's bat and stepped on first to end the opening frame of tonight's game. Nationals' right-hander Edwin Jackson needed just eight pitches to retire the Orioles in order in the bottom of the inning.

• 4-6: Michael Morse hit an opposite field single to right on the eighth pitch of the first at bat in the second. A second-straight line drive to right by Adam LaRoche put two on with no outs, but Wei-Yin Chen retired the next two batters, getting a groundout from Ian Desmond and a swinging K by Tyler Moore before Xavier Nady came through with a two-out infield single that brought one run in. A throwing error on the play by Orioles' infielder Wilson Betemit allowed LaRoche to score too and the Nationals had a 2-0 lead by the time Chen completed a 30-pitch second...

• 7-9: Nationals' center fielder Bryce Harper covered a long distance and ran into the right-center wall as he made a catch on a long fly ball off Matt Wieters' bat for the second out of what ended up being a 13-pitch, 1-2-3 second for Edwin Jackson, who set the first six O's batters he faced down in order. Harper walked on four pitches from Chen in his second at bat in the top of the third. The Nats' rookie outfielder stole second after Ryan Zimmerman popped out unproductively with a runner on, (Harper's 6th SB) but was stranded when Michael Morse struck out to end a 13-pitch third that had the O's lefty at 54 pitches total, down 2-0 to the Nats after two and a half. It took another 13-pitches for Edwin Jackson to retire the Orioles in order in the bottom of the third after which the Nats' right-hander was at 34 pitches overall.

• Lucky no.13 And 10-12: Two pitches into the fourth, Adam LaRoche hit his 13th HR of the year, taking a 90 mph 1-0 four-seamer from Wei-Yin Chen to right field and just over a wall-climbing Adam Jones and the seven-foot outfield wall for a solo blast and a 3-0 Nats' lead after three and a half. O's infielder Brian Roberts battled for nine pitches before striking out for the tenth-straight out recorded by Edwin Jackson. Tyler Moore tracked down a fly to left-center off J.J. Hardy's bat for out no. 11 and Chris Davis lined out to Adam LaRoche at first for out no.12. 15-pitch 4th. 49 pitches total through four scoreless by E-Jax.

• E:5: Wei-Yin Chen gave up a two-out single through short by Michael Morse but nothing else in an 18-pitch top of the 5th. A sharp grounder to third off Adam Jones' bat got by Ryan Zimmerman for what was ruled an error on the Nats' Gold Glove-winning third baseman. 4th E of the year for the Nats' third baseman. The potential perfect game by E-Jax was off the table there, and one out later a Wilson Betemit single through the right side of the infield ended the possibility of a no-hitter by Jackson. E-Jax got Mark Reynolds swinging for out no.2 of the fifth but loaded the bases with a two-out walk to Nick Johnson before popping Steve Pearce to end his fifth scoreless frame. A 21-pitch inning had the Nationals' starter at 70 pitches total after five at Camden Yards.

• Please Fix Zim: O's right-hander Darren O'Day took over for Wei-Yin Chen in the sixth and issued a one-out walk to Nats' outfielder Tyler Moore, but a double-play grounder off Xavier Nady's bat ended the top of the inning after 10 pitches by the Orioles' reliever. Edwin Jackson needed 10 pitches of his own to set the O's down in order in the bottom of the sixth, and he was at 80 pitches overall with a 3-0 lead and his 5th K of the night after he got Chris Davis swinging with an 0-2 curve to end the Orioles' inning. Former Nats' reliever Luis Ayala gave up a two-out single by Bryce Harper, but popped Ryan Zimmerman up to end the top of the seventh (w/ Zim 0 for 4).

• Shutout Ends: Adam Jones took a 2-2 slider to left on a line and off the foul pole 333 ft from home for the O's outfielder's 19th HR of 2012 and the Baltimore Orioles' first run of the game in the bottom of the seventh. Still 3-1 Nationals. After Edwin Jackson gave up back-to-back hard-hit balls, the second of which fell in for a one-out single by Wilson Betemit, the Nationals' bullpen got active quickly with the starter at 90 pitches on the night. A 3-2 slider to Mark Reynolds was lined to left in the next at bat, and Edwin Jackson was done after 6.1 IP, 4 H, 1 R, 1 ER, 1 BB, 5 K's. The two runners on were his. Lefty-hander Michael Gonzalez came on to face right-hander pinch hitter Ronny Paulino, who replaced Nick Johnson. Gonzalez started behind 3-0, but got a line drive to short with a full-count fastball. Desmond made the catch and stepped on second for an inning-ending unassisted DP. 3-1 Nats after seven in Camden Yards.

• STRAIGHTEN THAT CAP, PUNK!!!: Orioles' right-hander Pedro Strop retired the Nationals in order in a 17-pitch top of the eighth after which Nats' lefty Sean Burnett came out of the bullpen looking to protect the Nationals' 3-1 lead. The left-handed reliever got the first out of the inning with two pitches, then battled Brian Roberts in a 13-pitch AB that ended with a single to center by the Orioles' infielder. Burnett's 21st pitch of the inning was a 2-2 sinker to J.J. Hardy and the Nats' lefty got a 6-4-3 DP out of the O's shortstop to preserve the Nats' 3-1 lead through eight innings in Orioles Park.

• Clipp'd: Rick Ankiel doubled off O's lefty Troy Patton in the top of the ninth, but two outs later he was stranded at third when Danny Espinosa grounded out to end the Nationals' ninth. Tyler Clippard came on in the ninth looking for save no. 12 in 12 opportunities. O's outfielder Chris Davis flew out to left for out no. ONE!!! Adam Jones K'd swinging at a 82 mph full-count change a pitch after the Orioles' outfielder fouled off a 94 mph fastball. Matt Wieters grounded to second and in the next at bat and Danny Espinosa threw to first to end the Nationals' 41st win of 2012. E-Jax gets the win. Clippard gets the save. And there will be a rubber match tomorrow in Orioles Park. 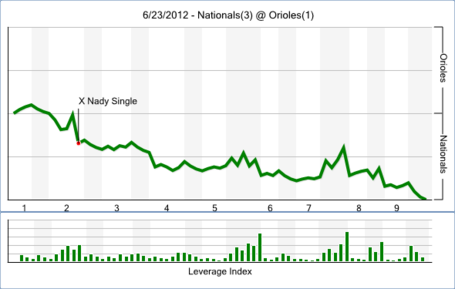