• Zim Not Fake Tough: Ryan Zimmerman was still in the lineup this afternoon even after admitting last night that the shoulder inflammation that has plagued him all season continues to cause him discomfort which has robbed him of the bat speed he'd previously produced. The 27-year-old third baseman once again found himself behind on just about every fastball he saw as he fouled several mid-90's heaters off to the right side in his first at bat in the finale of the Washington Nationals' three-game series with the Baltimore Orioles. Zimmerman entered the game 0 for 8 in the first two games of the series, and eventually flew out to Adam Jones in right-center, sending an opposite field line drive to the O's outfielder for the second out of what ended up being a 17-pitch first by Orioles' starter Jake Arrieta, who surrendered only a single by Bryce Harper in the opening frame.

Ross Detwiler, in his return to the rotation in place of Chien-Ming Wang, was working quickly and throwing hard in an 11-pitch, 1-2-3 bottom of the first in which he was sitting around 93 mph with his fastball and throwing strikes to the first three Orioles' batters.

• Left Side?: Danny Espinosa connected with a 1-2 curve from Jake Arrieta and lined a two-out single to right-center in the top of the second, but Rick Ankiel K'd swinging at a 90 mph 1-2 fastball to end an 18-pitch inning by the Orioles' starter. O's outfielder Steve Pearce K'd swinging through a 3-2 change in a 17-pitch second by Nats' lefty Ross Detwiler, who was up to 28 pitches total after two scoreless at Camden Yards.

• Run Onion Run: Nationals' backstop Jhonatan Solano doubled to right field in the top of the third, sending a low liner by first and into the corner in right, then hustling around first and diving into second exhausted and just ahead of the throw in. Steve Lombardozzi got hit on the shoe in the next AB with a diving slider inside from Arrieta that caught his back foot, so Bryce Harper stepped in with two runners on and no one out. Harper hit one hard, but back to the mound and Arrieta stabbed it to start a slick 1-6-3 for the first two outs of the third, but Ryan Zimmerman came through with a two-out single, lining a 95 mph fastball to center to bring Solano in and make 1-0 Nationals after two and a half.

• Det Won't Be Rattled: Ross Detwiler got a fly to right from Ronny Paulino for the seventh-straight out to start the game, but O's left fielder Steve Tolleson singled to left in the next at bat for the Orioles' first hit. Robert Andino grounded to second for what should have been an inning-ending 4-6-3, but Ian Desmond threw high to first and Adam LaRoche couldn't hold on to it as he leapt and swiped at the runner as he passed. A force at second off Brian Roberts' bat ended the bottom of the third, however, and the 11-pitch inning had Detwiler at 39 pitches overall after three.

• Detwiler Remains Calm: Jake Arrieta retired the Nationals in order in an 11-pitch, 1-2-3 fourth, after which he was at 72 pitches overall on the day. Ross Detwiler gave up leadoff and one-out singles by J.J. Hardy and Matt Wieters in the Orioles' fourth, but dialed it up to 95 to get first baseman Mark Reynolds swinging for out no.2 and K no.3 in 3.2 scoreless. Detwiler issued his first walk of the afternoon to Steve Pearce, loading the bases for Ronny Paulino, but the Orioles' DH flew out to right to end the bottom of the fourth after 24 pitches by the Nats' starter. Jake Arrieta needed just eight pitches to retire the Nationals in order in the top of the sixth, after which he'd retired seven straight going back to Ryan Zimmerman's two-out RBI single in the third.

• Detwiler Loses His Cool, But Not Lead: Steve Tolleson gave away an out, popping a bunt attempt back to Ross Detwiler on the first pitch of the Orioles' fifth. Robert Andino hit a broken bat single to short right with one down, and Brian Roberts took the second walk of inning from the Nats' left-handed starter after which Ross Detwiler was screaming into his glove unhappy with home plate umpire David Rackley's zone. A visit from pitching coach Steve McCatty seemed to calm Detwiler down, and he got out no.2 on a weak grounder toward third by J.J. Hardy that Ryan Zimmerman handled. (ed. note - "'Handled' here meaning made a great charging play.") Adam Jones stepped in with runners on second and third, and lined a 2-2 pitch to left to end the bottom of the fifth. Still 1-0 Nats. Detwiler up to 82 pitches after a 19-pitch frame.

• Charlie Harper Hustle: Bryce Harper was hustling out of the batter's box on a leadoff single to center in the top of the sixth, and he kept running, taking second ahead of a throw in by Adam Jones. Harper's 11th double of 2012. Ryan Zimmerman was completely fooled by a 2-2 slider way outside for the first out of the inning and after an intentional walk to Adam LaRoche, Michael Morse K'd swinging and Ian Desmond popped out to end a 23-pitch frame by Arrieta. Craig Stammen took over for Ross Detwiler in the bottom of the sixth, retiring the Orioles in order in a 13-pitch inning to preserve the Nationals' 1-0 lead.

• Stam-Men, Not Stay-Men: O's lefty Troy Patton needed just seven pitches to retire the Nationals in order in the top of the seventh. Orioles' DH Ronny Paulino lined to right on the first pitch from Craig Stammen in the bottom of the frame. Stammen was back out for his second inning of work. O's manager Buck Showalter turned to Chris Davis, who was mired in an 0 for 28 slump and was 0 for 29 after he flew out to left for the first out. A four-pitch walk to Robert Andino put two on in front of Brian Roberts, but the Orioles' infielder grounded out to first for out no.2 and J.J. Hardy rolled out no.3 to third where Ryan Zimmerman made the play to end a 16-pitch inning by Stammen.

• Zim's Gutty, Veteran-y, Gritty-y: Troy Patton struck both Steve Lombardozzi and Bryce Harper before he was replaced on the mound by Pedro Strop. Ryan Zimmerman singled up the middle for his second hit in four at bats this afternoon, but Orioles' right fielder Chris Davis made a nice shoestring catch for the third and final out of the Nationals' eighth. Sean Burnett gave up an opposite field single by Adam Jones in the bottom of the inning and a two-run HR by Matt Wieters in the next at bat. BANG! Wieters crushed an 0-1 fastball, sending his 10 HR of 2012 into the Orioles' bullpen deep in center field. 2-1 O's. Just the second HR Burnett's surrendered this season. Burnett was replaced after a one-out walk to Steve Pearce and Ryan Mattheus got help from Ryan Zimmerman at third on a slick 5-4-3 inning ending DP on a grounder to third off Ronny Paulino's bat. 2-1 O's after eight.

• O's closer Jim Johnson came on in the ninth, looking for save no. 21 of 2012. Michael Morse grounded out to second. Ian Desmond took a one-out walk to put the tying run on, but a strike'em out, throw'em out double followed as Espinosa K'd swinging and Desmond got gunned by Wieters trying for second. Ballgame. O's take two of three from the Nationals and take the season series from the Nats. 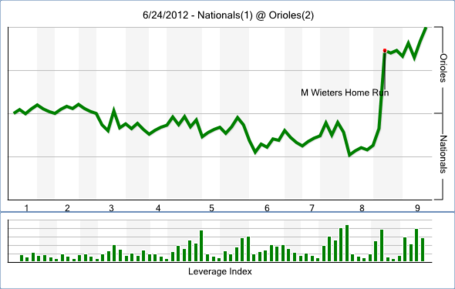