Share All sharing options for: Colorado Rockies Get To Stephen Strasburg In 6th, Beat Washington Nationals 4-2 In Series Opener In Coors Field.

• HBP On RSD: Danny Espinosa was on first, having been hit in the back in the first at bat of tonight's game. In AB no.2 of the first of four for the Nats in Coors Field, Colorado Rockies' shortstop Jonathan Herrera fielded a grounder and made a deliberate underhand toss to second and a late-arriving second baseman Marco Scutaro on what should have been the second double play grounder of Washington Nationals' outfielder Bryce Harper's career, but the exchange was awkward and in slow-motion and the Rockies' infielders had no chance of doubling Harper up at first after the force at second. Ryan Zimmerman hit one hard enough to third in the next at bat, however, so that third baseman Jordan Pacheco, Scutaro and Rockies' first baseman Todd Helton could get it right. 5-4-3 inning-ending DP and a nine-pitch opening frame for Colorado's Jeff Francis.

Rockies' leadoff man, Dexter Fowler, took a 96 mph fastball for a ride in Stephen Strasburg's first career at bat in Coors Field, but Fowler's counterpart in center, Bryce Harper, tracked it down and made a leaping catch for the first out of a 16-pitch 1-2-3 bottom of the inning which ended with Carlos Gonzalez swinging through a 90 mph 2-2 changeup from the Nats' 23-year-old, right-handed ace...

• Unproductive Outs: Michael Morse started the second with a scorched single through short. Jeff Francis struck the next two batters out, getting Adam LaRoche and Ian Desmond swinging before popping Tyler Moore up to end a 12-pitch second. A 97 mph 2-2 fastball outside at the knees got Stephen Strasburg a called strike three and K no.2 from Michael Cuddyer in the Rockies' second. Another 97 mph heater got a groundout to short from Todd Helton, and a 96 mph 0-2 four-seamer to Jordan Pacheco got Strasburg a second called strike three and his third K in 2.0 scoreless. A 12-pitch second had the Nats' right-hander at 28 pitches overall.

• Thanks, Bag: Jesus Flores singled to start the third and took second on a sac bunt by Strasburg. Danny Espinosa took a changeup in the back for his second HBP in two AB's against Francis tonight, but Bryce Harper K'd swinging at an 0-2 fastball away and Ryan Zimmerman grounded to first for what looked like an inning-ending groundout, but it bounced off the first base bag and up into short right for a two-out RBI double and a 1-0 Nats' lead after two and a half in Coors Field. Rockies' catcher Wilin Rosario started Colorado's third with a double to left-center on the first pitch of the frame from Stephen Strasburg, but five pitches, a pop to third and a weak grounder to first later the Nats' right-hander had two down with the runner at third when Dexter Fowler rolled a swinging bunt out to short for an infield single and a game-tying RBI. 1-1 game after three.

• DIY!!: Jeff Francis needed just 12-pitches to retire the Nats' batters in order in a 1-2-3 4th after which he had 4 K's in 4.0 IP and 53 pitches total on the night. A 10-pitch 3rd had Strasburg at 38 pitches as he started the bottom of the fourth. The Nats' right-hander gave up a two-out single by Todd Helton, but Strasburg completed a 14-pitch frame when he popped Rockies' shortstop Jordan Pacheco up to strand Helton at first in a 1-1 game. Jesus Flores almost made it 2-1 two pitches into the fifth when he lined to straight-center and off the wall for what he thought was a solo HR. The Nats' backstop settled for a double, sliding in safely just ahead of a throw in and Flores then scored when Strasburg helped himself with an RBI two-bagger to center that made it a 2-1 game after four and a half. Strasburg's 4th double of 2012.

• Sit. Down.: A 96 mph 1-2 fastball up high got Wilin Rosario swinging for out no.1 of the fifth and K no. 5 of the night for Nats' right-hander Stephen Strasburg, who struck Jonathan Herrera out with an 83 mph 1-2 bender and got the opposing pitcher with an 89 mph 1-2 change to strike out the side in a 13-pitch frame that had him at 65 pitches overall with 7 K's in 5.0 IP and a 2-1 lead over Rockies.

• Things Fall Apart: Rockies' reliever Josh Roenicke got the first two outs of the Nationals' sixth after taking over for Jeff Francis, but he gave up a two-out triple by Nats' shortstop Ian Desmond, who just happens to be the reliever's brother-in-law. Desmond was stranded at third, however, when Tyler Moore flew to center and Stephen Strasburg was quickly back out on the mound for the home half of the sixth. Dexter Fowler ripped a 1-1 change by first and into the right field corner for a sure-thing triple to start the bottom of the frame. The speedy Rockies' outfielder was looking back over his shoulder to watch the Nats throw it in as he cruised into third. In a scary incident in the next at bat, Strasburg hit Rockies' infielder Marco Scutaro in the head with a 95 mph fastball that bounced off Scutaro's helmet with a sickening thud. Scutaro left the game under his own power. Pinch runner Chris Nelson took over at first...

... Carlos Gonzalez started down 1-2 but ended up singling to right on a full-count curve from Strasburg in the next at bat. Fowler scored from third on the hit to tie it at 2-2. Michael Cuddyer hit the second-straight single off Strasburg to load the bases with no one out and a sac fly to center by Todd Helton gave the Rockies the lead. 3-2 game in Colorado after six. Strasburg pitched his way out of trouble by walking Jordan Pacheco to reload the bases before striking out Wilin Rosario and getting a force at second on a grounder from Jonathan Herrera that ended a 32-pitch frame after which the Nats' starter was at 97 pitches overall and done for the night.

• Insurance Runs Are Defined As...: Bryce Harper K'd swinging at a curve in the dirt from Josh Roenicke to end the Rockies' right-hander's second scoreless inning in relief. Tom Gorzelanny walked pinch hitter Eric Young in the first at bat of the Rockies' seventh, then had the outfielder steal second with Dexter Fowler at the plate. Fowler K'd swinging for the first out of the inning, but Chris Nelson, who entered the game on the HBP on Scutaro, drove Eric Young in to make it a 4-2 game. Gorzelanny needs 20 pitches to get through the seventh. Rockies' right-hander Matt Belisle needed just 10 pitches to retire the Nationals in order in the eighth, popping Ryan Zimmerman up before he struck out Michael Morse and Adam LaRoche and it was 4-2 Rockies after seven and a half.

• Rally?: Tom Gorzelanny needed just eight pitches to retire the Rockies in order in the eighth. Colorado reliever Rafael Betancourt came on to close out the ninth. Ian Desmond K'd swinging at a 2-2 slider from the Rockies' right-hander. Tyler Moore fought to stay alive and dumped a 2-2 slider into short center for a one-out single. Jesus Flores went the other way with a 1-2 cutter and sent an opposite field single through the right side of the infield, but Roger Bernadina lined to right for out no.2. Danny Espinosa hit a dribbler to second to end the first of four for Washington in Colorado. 4-2 final. Strasburg takes his second loss of the season. 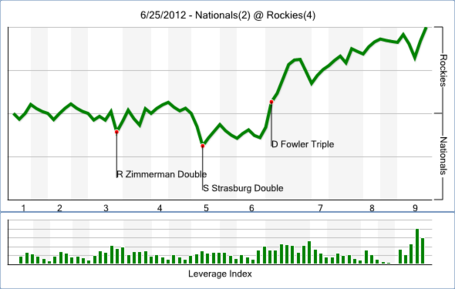