• Hill Chatter: Two pitches into the game, after a hard-hit line drive to right by Colorado center fielder Dexter Fowler that Michael Morse caught, Washington lefty Gio Gonzalez was already talking to himself on the mound. The Nationals' starter got a fly to center from Rockies' third baseman Jordan Pacheco for the second out of the first, but gave up back-to-back two-out line drives to right with both Carlos Gonzalez and Michael Cuddyer singling to put runners on first and third with two down. Todd Helton K'd swinging, however, and Gio Gonzalez was through a 16-pitch bottom of the first in his 15th start of 2012. Colorado left-hander Christian Friedrich got three ground ball outs with eigth pitches in the top of the first tonight, but after retiring Michael Morse to start the second inning, the rookie starter surrendered an opposite field home run hit by Adam LaRoche, who took a first-pitch fastball to left for an opposite field blast and a 1-0 Nats' lead. Ian Desmond doubled in the next at bat and Tyler Moore followed with a single to put two on in front of Jesus Flores, but the Nationals' backstop grounded into an inning-ending 5-4-3 to get Friedrich through a 14-pitch second.

• 999: Gio Gonzalez retired the Rockies in order in an 11-pitch, 1-2-3 second that had him at 27 pitches overall after two innings pitched. Danny Espinosa singled with one down in the third and took second on a two-out double (and career hit no.999) by Ryan Zimmerman. Zim's 12th double of 2012 came on a 94 mph heater from Freidrich, and it was followed by double no. 6 of the season by Michael Morse, who drove both runners in to give Washington a 3-0 lead over Colorado in the third. Gio Gonzalez recorded K's no. 3 and 4 for the first two outs of the Rockies' third when he got the opposing pitcher swinging at a full-count fastball and then caught Dexter Fowler looking with a 96 mph four-seamer the outfielder thought was low. Jordan Pacheco singled with two down, however, and Carlos Gonzalez doubled him in, lining one to left and over Tyler Moore's head to get Colorado on the board down 3-1 in the third.

• 35 Pitches: The Nats' lefty was up to 26 pitches in the third when he issued a two-out walk after a nine-pitch at bat against Michael Cuddyer. Todd Helton worked the count full and lined to center for a two-out RBI single that brought Carlos Gonzalez in and made it 3-2 Nats. Bryce Harper faceplanted in the center field grass trying to field the ball in center and then sailed a throw home that got by Jesus Flores. The Nats' catcher tossed to Gio Gonzalez covering home when Cuddyer broke from third and the Nationals' left-hander almost got hurt as he turned into the runner trying to catch Flores' toss only to collide with Cuddyer. Luckily no one was hurt, but it was tied at 3-3 after 3.0. 35-pitch inning for Gio, who was up to 62 pitches overall after three.

• #DIY: Ian Desmond singled to start the fourth, but one out later he was thrown out by Rockies' catcher Wilin Rosario when the Nats' SS tried to take second on a pitch in the dirt. Jesus Flores doubled to left with two down, however, and Gio Gonzalez came through with a two-out RBI single to left to retake the lead. DIY, Gio. 4-3 D.C. After giving himself the lead, Gonzalez went back to the mound and tossed a quick, 7-pitch, 1-2-3 fourth to leave him at 69 pitches overall after four.

• Mr. 1,000: Rockies' lefty Christian Friedrich retired Bryce Harper for the first out of the fifth before he was lifted in favor of Colorado right-hander Guillermo Moscoso. Moscoso threw a 2-1 four-seam to the first batter he faced, Ryan Zimmerman, and surrendered hit no.1000 of the seven-year veteran's MLB career on a hard hit grounder to second that ate up Rockies' infielder Chris Nelson. It took the Nats' first 1st Round pick, no.4 overall in 2005, 3,922 PA's to get there. Congrats, Zim. Michael Morse followed with the second-straight single off the Rockies' reliever and Adam LaRoche walked to load the bases for Ian Desmond, who battled for eight pitches and doubled to left to drive Zim and Morse in and make it 6-3 Nats. Desmond's 19th double of 2012. And make that 9-3 Nationals after Tyler Moore crushed a 2-2 four-seamer from Moscoso for a towering HR to left and a six-run lead. Moore's 3rd HR of 2012 is a three-run blast twenty rows deep into the left field stands.

• HR? Off Gio?: Two pitches into the Rockies' fifth, Dexter Fowler cut into the Nationals' lead with an opposite field HR to right off Gio Gonzalez that made it a 9-4 game in the Nats' favor. Fowler's 10th was just the second this year surrendered by Gonzalez in 88.2 IP. The Nats' lefty got a double play grounder to third from Michael Cuddyer with one down in the inning, after he'd struck out Carlos Gonzalez for his sixth K of the game, but Ryan Zimmerman bobbled it and threw wide to Danny Espinosa at second, who couldn't make the play. Two on, with two out, but Gio Gonzalez did it again, getting a second double play grounder from Todd Helton and a 4-6-3 inning-ending DP. A 21-pitch frame had Gonzalez at 90 pitches total after five.

• TKCHZ!!: Ryan Zimmerman hit HR no. 4 of 2012 one AB too late, just missing a chance to have his 1,000th hit be a round-tripper. Hit no. 1,001 is a HR instead as Zimmerman takes Guillermo Moscoso to left and just over the wall by the 390ft sign. 10-4 Nationals on Zim's fourth. Michael Morse singled off Moscoso in the next at bat and Adam LaRoche followed with HR no.15 of 2012, sending a second opposite field blast out to left for his second HR of the game and a 12-4 Nationals' lead. That's a HR, single, HR and then a double by Ian Desmond, all with two outs against the Rockies' reliever. Desmond's 20th double of 2012 leaves him 4 for 4 (with 3 doubles) tonight. 12-4 Nationals after five and a half.

• 1 in 84.2 then 2 in 6.0: Gio Gonzalez had allowed just one home run in 84.2 IP before tonight's game but he gave up the second HR in 6.0 innings tonight when Rockies' shortstop Jonathan Herrera hit a two-out blast to left to make it a 12-5 game after six in Coors Field. A 12-pitch frame had Gonzalez at 102 pitches and done for the night with a seven-run lead.

• Everybody Hits!!: Bryce Harper (0 for 4) faced Rockies' right-hander Zach Putnam with two on and one out in the seventh, looking to become the last Nats' starter to collect a hit tonight. A slow roller to third stayed fair and Harper reached first safely for his first and the Nationals' 19th hit off the Rockies tonight. Ryan Zimmerman flew to right with the bases loaded for what looked like an RBI sac fly, but a strong throw home by Michael Cuddyer had Jesus Flores turning tail and running back to third where he was tagged to complete a rare 9-3-5 DP. Still 12-5 D.C.

• Stay-Min: Craig Stammen gave up back-to-back one-out singles in the seventh before completing a 15-pitch frame. Michael Morse singled to start the eighth, collecting his 4th hit in 5 AB's and the Nationals' 20th hit of the night off the Rockies. Colorado right-hander Matt Reynolds retired the next three batters, however, and it was still 12-5 after seven and a half. Stammen gave up a single but nothing else in a scoreless 12-pitch 8th. Mark DeRosa hit a ground-rule double to left in the Nationals' ninth, tying the Nats' record for hits in a game since relocating in 2005. 11 extra base hits tonight for the Nationals. Still 12-5 after eight and a half. Michael Gonzalez took over on the mound in the ninth, giving up a leadoff single by Dexter Fowler but nothing else in a scoreless ninth. 12-5 Nationals final. 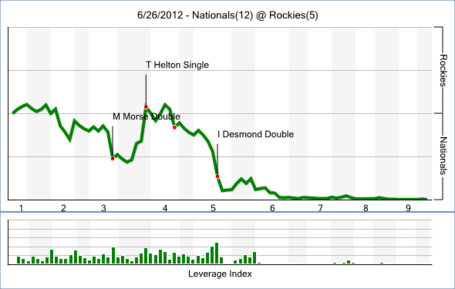