The Washington Nationals collected 21 hits and 12 runs Tuesday night in a 12-5 romp over the Colorado Rockies and they kept swinging the hot bats on Wednesday night in Coors Field. In Tuesday's win it was Ryan Zimmerman (3 for 5, 2B, HR), Michael Morse (4 for 5, 2B), Adam LaRoche (2 for 4, 2 HR's), Ian Desmond (4 for 5, 3 2B) and Tyler Moore (2 for 5, HR) who pounded Rockies' pitchers. Wednesday night it was more of the same from the middle of the Nats' lineup.

After making two nice defensive plays at first, going up for a high throw from Ryan Zimmerman on a swinging bunt by Marco Scutaro (who was thankfully okay after getting hit in the head by Stephen Strasburg Monday) and diving to his left to steal a potential extra base/RBI hit from Rockies' outfielder Carlos Gonzalez, 25-year-old Nats' first baseman Tyler Moore hit a two-run HR to center in the bottom for the second for his fourth HR of 2012 and his second in two games in Colorado to give the visiting Nats a 3-0 lead in the second inning of the third game of four for the Nationals in Coors Field.

In the first three games in Colorado, Moore is now 6 for 13 with a double, two home runs and 5 RBI's, lifting his season line to .346/.414/.635 with three doubles and four home runs in 23 games and 58 plate appearances. Earlier this week Nats' skipper Davey Johnson told reporters that the right-handed hitting and throwing 1B/OF would be seeing more playing time with the way he's been hitting, a point the manager reiterated after Moore went 3 for 5 with a double and a home run in last night's game.

"[Moore] has quality at bats," Johnson told reporters after the 11-5 win on Wednesday, "Very seldom does he get himself out. He approaches every at bat like a real professional up there. I'm real impressed. Everybody on the coaching staff is impressed. I've been playing him against left-handers and it's been easy here because all we're seeing is left-handers. But he handles right-handers as good as he handles left-handers, so the future is real bright for him."

Asked if Moore would stay in the lineup going forward, the 69-year-old manager said the '08 16th Round pick has earned his way into the everyday lineup at this point. "Right now, I'm going to let [Moore] stay pretty much in the lineup," Johnson said, "There's some considerations. I've really liked [Steve] Lombardozzi leading off and setting the table, so we'll be weighing things up in the air and it depends on what some other guys do with their offense, but he's certainly a good weapon to have in the lineup all the time."

With the score 4-0 Nationals after two, Ryan Zimmerman, who was 2 for 4 last night, hit a 410ft (approx) blast to left off Rockies' rookie left-hander Edwar Cabrera to lead off the fourth and make it a 5-0 game. One out later, Ian Desmond hit a long fly ball to center that cleared the Coors Field wall just over a leaping Dexter Fowler 415+ from home. 6-0 Nationals on Desmond's 12th of 2012. The Rockies' debuting 24-year-old left-hander didn't make it out of the third. His replacement, Matt Reynolds didn't fare much better, entering the game and surrendering back-to-back doubles by Tyler Moore and catcher Jhonatan Solano, with the Nats' backstop's two-bagger bringing Moore in to make it 7-0 Nationals after two and a half.

Nationals' starter Jordan Zimmermann gave up a run on a two-out single in the third, but the 26-year-old right-hander was dominant in his 15th start of 2012, holding the Rockies to a run on eight hits in 7.0 IP, over which he walked three, struck out one and got 12 ground ball outs from Colorado's batters. Zimmermann threw 95 pitches, 61 strikes and for once got some run support in earning his fourth win of the season.

Davey Johnson was impressed with what he saw from his no.3 starter last night. "[Zimmermann] made quality pitches when he had to and that was a strong game," the manager said after the Nats' win, "This is a tough ballpark to pitch in and holding them down to one run is an outstanding effort."

"He's been unbelievable," Johnson said when asked about Zimmermann's relatively low profile, which is somewhat understandable since he's pitching behind Stephen Strasburg and left-hander Gio Gonzalez in the Nats' rotation, but the manager said that Zimmermann's talent and what he's accomplished has not gone unnoticed. "[Zimmermann's] not underrated by us or the league. He's a man out there. He's got great stuff. He's got a great feel for pitching. Sometimes he's so strong and such a good athlete, he gets a little over-aggressive and jumps out there and that leaves the ball up, but when he stayed in his groove he was really tough to hit."

Zimmermann also received more run support than he has in any other start this season and was able to pitch with the lead from the moment he took the mound thanks to a hustling Bryce Harper, who hit a one-out single, stole second, took third on a throwing error and scored on an RBI groundout by Ryan Zimmerman in the top of the first. Whether it's Coors Field or the sub-par Rockies' pitching that's the cause of it, the Nationals' offense has finally heated up, which is something Davey Johnson's been waiting for for some time now.

"I've said all along, all we have to do is do the things we're capable of doing," the manager told reporters late Wednesday night after the Nats' 11-5, 14-hit win in which they connected for five doubles and three home runs. "It seems like we're starting as a group to start doing the things that we're capable of doing," Johnson continued, "I like the offense. It's been maligned and everything else and we've gone into where we've scored just one or two runs in ballgames, but we certainly have the potential to be a really good offensive ballclub."

The difference in the last few games, as the Nats' skipper sees it, has been the suddenly-hot heart of the Nationals' lineup. "When you lose the heart of your lineup, it's awful tough for the rest of the guys to gear up and carry the load. The middle of our lineup has got to perform, that's been basically the key here in the last two days. The middle of our lineup has been very productive." 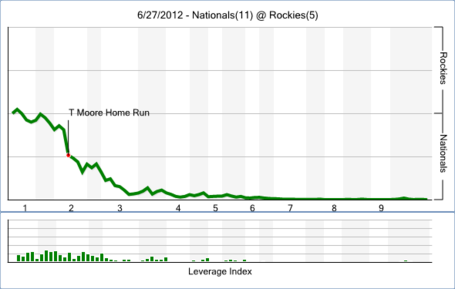