Share All sharing options for: Washington Nationals Drop 11-10 Decision To Colorado Rockies On Marco Scutaro's Walk-Off Single In The 11th.

• 4 of 4 In COL: The finale of the four-game series for the Washington Nationals and Colorado Rockies in Coors Field started with a 12-pitch, 1-2-3 top of the first by Rockies' lefty Josh Outman. Nationals' hitters roughed Rockies' pitching up in the previous two games, but the roles were reversed early this afternoon as Washington's bats were quiet in the first and Colorado's hitters connected for three straight singles to start the bottom of the inning up 1-0 on Edwin Jackson and the Nats before an out was recorded.

• E-Jacked: Dexter Fowler, Marco Scutaro (in a 9-pitch AB) and Carlos Gonzalez hit back-to-back-to-back singles off E-Jax in the Rockies' first with Fowler taking third on Scutaro's hit and scoring easily on CarGo's grounder through the right side of the infield. The Nationals' starter walked Todd Helton to load the bases in the next AB, and had Ryan Zimmerman bobble a ground ball to third off Chris Nelson's bat to let another run in. 2-0 Rockies. Carlos Gonzalez fell for a fake throw to first by Zimmerman on the play, however, and he was tagged out as he rounded the third base bag for the first out of the inning, but that only ensured that outfielder Tyler Colvin's HR in the next at bat was a three-run blast instead of a grand slam. 5-0 Rockies after one in Coors Field. Edwin Jackson threw 36 pitches total in the first.

• 7-0?: After a 16-pitch, 1-2-3 second by Josh Outman, Edwin Jackson returned to the mound and gave up a one-out single by Carlos Gonzalez and a two-out RBI double by Chris Nelson, who drove CarGo in from second after a throwing error on a pick attempt by E-Jax had advanced the Rockies' runner. 6-0 Colorado on Nelson's double and 7-0 when Nelson scored on the second-straight two-out hit, this one by Tyler Colvin. 7-0 Rockies in the second with Jackson up to 23 pitches in the inning and 69 total after two.

• <3 Is Hot: Edwin Jackson faked a bunt and pulled the bat back before singling for the Nationals' first hit of the game off the Rockies' Josh Outman with one out in the top of the third. Tyler Moore, who'd walked to start the frame, took second on E-Jax' hit and then third on a bloop single to left by Danny Espinosa. Bryce Harper K'd swinging for out no.2 on a fastball low in the zone that should have been ball four. Ryan Zimmerman tossed his bat thinking he'd walked in a run on a high 3-0 heater, then apologized to the ump as he retrieved the lumber and stepped back in to face a 3-1 pitch. Two pitches later, the Nats' third baseman singled through the middle of the infield for a two-out, two-run hit that made it a 7-2 game. Michael Morse then followed with a long fly ball to center that backed Dexter Fowler up to the wall and sailed over the outfielder's glove. 415ft+, 3-run HR. 7-5 game after two and a half on Morse's second of 2012.

• Edwin Jackson responded to the Nationals' hitters picking him up with a 14-pitch, 1-2-3 bottom of the third. Tyler Moore lined a single to left to start the fourth, leaving him 1 for 1 with a walk today and 7 for 14 in the series in Colorado. Rockies' right-hander Josh Roenicke, who took over for Outman (3.0 IP, 5 H, 5 R) retired the next two batters (swinging K, sac bunt) and picked Moore off second to end any chance of a rally. Rockies' infielder Marco Scutaro singled to start the bottom of the fourth and end Edwin Jackson's outing. 3.0 IP, 10 H, 7 R*, 7 ER*, 2 BB, 5 K's, 79 P, 48 S for E-Jax. Tom Gorzelanny took over on the mound. A wild pitch moved Scutaro into scoring position and he scored when Carlos Gonzalez threw his bat at a 3-2 slider from Gorzelanny and hit an RBI single to center to make it 8-5. * = 8 ER for E-Jax. Tyler Colvin then tripled in run number nine on a line drive to center that made it 9-5 Rockies after four in Coors Field. And Colvin was halfway to the cycle.

• Desi = All-Star?: Danny Espinosa doubled on a line drive to right from the left side and Bryce Harper followed with an opposite field RBI single to left to drive his teammate in and make it 9-6 Rockies in the top of the fifth. One out later, Michael Morse grounded into what looked like an inning ending 5-4-3, but Colorado third baseman Chris Nelson threw away the 5-4 part and allowed Harper to take third to put runners on the corners with one down. Adam LaRoche got enough of a 1-2 cutter from Roenicke for a sac fly to CF that scored Harper. 9-7. And Ian Desmond got all of a 93 mph 2-0 four-seamer for a two-run opposite field home run that made it 9-9 after four and half in Coors Field. Desmond's 13th HR of 2012. 9-9 after four and a half.

• Cheese (aka Tom Gorzelanny): Tom Gorzelanny hit the opposing pitcher (Josh Roenicke) in the first at bat of the Rockies' fifth and then gave up a double by Dexter Fowler that bounced off the out-of-town scoreboard in right. Runners on second and third with no outs. A walk to Marco Scutaro loaded the bases. Gorzelanny got a 6-4-3 DP out of Carlos Gonzalez, but gave up the lead. 10-9 Rockies after five. The Nationals went down in order on 10 pitches in the sixth in Josh Roenicke's third inning of work. Ryan Mattheus took over in the bottom of the inning, giving up back-to-back singles before getting a 5-4-3 DP and a groundout to second to keep it a one-run game after six. 10-9 Rockies.

• Rally? No: Michael Morse's two-out single was the Nationals' only hit in a scoreless top of the seventh by Rockies' left-hander Rex Brothers. Dexter Fowler (3 for 5) doubled to right with one down in the bottom of the inning. After Ryan Mattheus popped Marco Scutaro up for out no.2, Michael Gonzalez came on to face Carlos Gonzalez and walked the Colorado left fielder on four pitches before striking Todd Helton out to end the bottom of the seventh. Still 10-9 Rockies. Colorado right-hander Matt Belisle retired Ian Desmond and Tyler Moore to start the top of the eighth, but Jesus Flores hit a two-out double to left for his first hit of the game and 9th double of the year. Roger Bernadina got a pinch hit appearance with two down and sped to first for an infield single on a grounder to short, but Danny Espinosa popped out to left-center to end the Nats' eighth. Still 10-9 Colorado.

• One More Run?: Sean Burnett threw a scoreless eighth inning. Rockies' closer Rafael Betancourt came on looking for the save, but gave up the lead when Bryce Harper ca-rushed a 1-1 slider for a no-doubter to right field and off the wall at the back of the bullpen. 420ft? 10-10 tie. Harper's 8th HR of 2012 ties it up in the ninth. Betancourt retired the next three Nationals in order to keep it tied after eight and a half. Rockies' infielder Jonathan Herrera singled to right to start the Rockies' 9th. Pinch hitter Jordan Pacheco bunted Herrera over/gave up an out. A one-out walk to Dexter Fowler put two runners on, but Marco Scutaro grounded to short and Ian Desmond turned a 6-3 DP to end the Rockies' 9th.

• FREE BASEBALL!!: Adam Ottavino almost gave up the lead in the first at bat of the tenth when Ian Desmond missed a HR by inches, doubling off the top of the left field wall. Desmond's 22nd double of 2012. Tyler Moore K'd swinging for the first out of the inning. Jesus Flores grounded out for no.2. And Rick Ankiel K'd swinging, stranding Desmond at second after nine and a half. Todd Helton hit a one-out single to left, but his pinch runner was stranded two outs later as Craig Stammen threw a scoreless tenth. Rockies' right-hander Adam Ottavino struck out the side in eleventh, settin Danny Espinosa, Bryce Harper and Ryan Zimmerman down. Rockies' infielder Jonathan Herrera doubled to left-center with one in the bottom of the eleventh. Jason Giambi (aka the Giambino) [wretches] walked to put two runners on. And one out later, Marco Scutaro hit a 3-2 fastball to center for an RBI single and a walk-off win. 11-10 final in Coors Field. 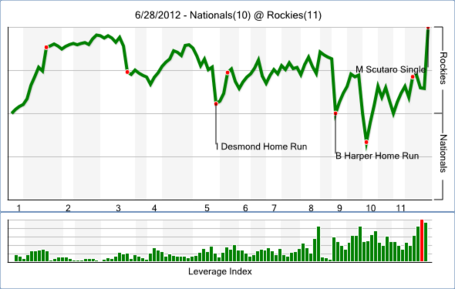