• Delgado vs Det: Chipper Jones made it over into foul territory off third to catch a low pop on the seventh pitch Washington Nationals' leadoff man Steve Lombardozzi saw in the opening at bat of the first game of the Nats' three-game series with the Atlanta Braves tonight in Turner Field. Jones had no chance to get Bryce Harper at first on a swinging bunt that rolled toward the left of the mound, however, and the Nats' 19-year-old outfielder was on with one down and Ryan Zimmerman up against the Braves' 22-year-old right-hander Randall Delgado.

The suddenly-red-hot Zimmerman, who's 9 for 23 in his last five games, started tonight's contest against the Nationals' NL East rivals with a single through second that moved Harper into scoring position, but Adam LaRoche grounded into an inning-ending 4-6-3 that brought a 23-pitch first by the Braves' starter to a close. Nats' lefty Ross Detwiler need just 13 pitches to retire Atlanta's first three batters in order in the bottom of the first and he had 13.1 scoreless in a row on the board when he was done with the inning. 0-0 after one.

• DIY: In spite of his recent hamstring issues, Michael Morse was able to go first-to-third™ in the second when Danny Espinosa followed Morse's leadoff single with an expertly-executed one-out hit-and-run grounder through the right side of the infield. Espinosa almost got caught in a run down making his way to second on a 3-1 pitch to Jesus Flores, (did he think it was ball four?) but with Morse on third the Braves hesitated long enough for the Nats' second baseman to scurry back to first safely ahead of the throw. Flores K'd swinging looking for out no. 2, leaving it up to Ross Detwiler, who helped himself with an RBI single to right that dropped in front of Braves' right fielder Jason Heyward for an RBI single. 1-0 Nationals after one and a half. Det's hit breaks on 0 for 14 streak at the plate in 2012. After giving himself a 1-0 lead, Ross Detwiler retired the Braves in order for the second-straight inning in a 12-pitch bottom of the frame. Six Braves up, six Braves down.

• E's: Jack Wilson bobbled a grounder to second by Adam LaRoche, putting the Nationals first baseman on with two down in the top of the third. Michael Morse hit a sharp grounder to third that Chipper Jones couldn't wrangle in the next at bat, and Andrelton Simmonds made an ill-advised attempt to catch LaRoche sleeping at second, recovering it and throwing by the bag instead for the second of two errors commited on the play. E 4, E 5 and E 6 on consecutive plays, and of course Ian Desmond then came through with a two-out, two-run double to left that made it 3-0 Nats. Desmond attempted to take third on the throw home trying for Morse and made it safely, but got tagged when he popped up from the slide and came off the bag. 3-0 Nationals after two and a half. (ed. note - "The E:5 on Chipper was eventually taken away.")

• There Goes The... [Drinks]: Ross Detwiler gave up a leadoff walk to Freddie Freeman in the Braves' third, but retired the next two batters with Delgado bunting Freeman over for out no.2. Michael Bourn then hit a two-out infield single to put runners on the corners before Andrelton Simmons grounded out to end the third.

• You Don't Hang Curves to The Jesus: Jesus Flores got a hanging 78 mph 2-2 curve from Randall Delgado and crushed it for a one-out blast in the top of the fourth. Long fly ball to left and into the stands, 4-0 Nationals on Flores' third home run of 2012. Ross Detwiler retired the Braves in order on nine pitches in the fourth, extending his scoreless inning-streak to 16.1 without allowing a run (or 17.1 if you count the three batters he retired after giving up a leadoff HR in the second inning of a two-inning outing in relief against Boston on June 8th.) 50 pitches, 33 strikes for Detwiler after four scoreless.

• Detwiler Gets In and Out of Trouble: Ryan Zimmerman (2 for 3) and Michael Morse (3 for 3) hit one-and-two-out singles, respectively, off Braves' reliever Cristhian Martinez in the fifth, but the Braves' right-hander retired Ian Desmond and escaped further damage. Matt Diaz started the Braves' fifth with a double off Ryan Zimmerman's glove and into left field. Two outs later, Detwiler hit pinch hitter Juan Francisco to put two on with two out and the Nats' starter then mishandled a grounder back to the mound by Michael Bourn, E:1 and the bases loaded with two down. Andrelton Simmons popped to right to leave'em loaded though, and it was 4-0 Nats after five with Detwiler up to 67 pitches after a 17-pitch 5th.

• 6.0 Scoreless: The second Braves' reliever, Anthony Varvaro threw a quick 17-pitch, 1-2-3 top of the sixth, after which Ross Detwiler threw his sixth scoreless inning of the night, retiring the Braves in order in a seven-pitch inning. 18.1 scoreless for Detwiler. 74 pitches after six innings in Atlanta. Steve Lombardozzi doubled to left field and over Matt Diaz's head to start the seventh. 10th double of the year for Lombo, but Harper, Zimmerman and LaRoche went down in order to end the top of the frame. 2.0 scoreless in relief for the Braves' Varvaro. 4-0 Nats after six and a half.

• A Run? On Det?: Ross Detwiler hit Freddie Freeman in the shoulder with a slider to put a runner on with one down in the Braves' seventh. Jack Wilson dropped a bunt down that Detwiler couldn't pick up cleanly enough to make a play. Two on with one out, and a balk moved both runners into scoring position. Martin Prado sent an RBI single through second in a pinch hit appearance in the next at bat and it was 4-1 Nationals with runners on the corners and one down. Detwiler's scoreless-inning streak was over. A sac fly to left by Michael Bourn made it 4-2, and a two-out, two-run HR by Andrelton Simmons tied it. Simmons crushed a letter-high 1-2 slider for his 3rd HR of 2012. 4-4 game. Detwiler's done. Sean Burnett got Jason Heyward swinging to end the seventh.

• MORSE CRUSH: Braves' right-hander Chad Durbin took over in the eighth and gave up a solo HR to right by Michael Morse on the first pitch he threw. HR no. 3 for Morse, 5-4 Nationals. 4 for 4 on the night for Morse. Jesus Flores doubled with two down to chase Durbin. Roger Bernadina got a pinch-hit single on a grounder up the middle off Jonny Venters that Simmons could only knock down. Runners on the corners, and then bases loaded after Sean Burnett worked a walk, but Bryce Harper K'd swinging to end the inning. Sean Burnett came back out for the eighth, and surrendered an opposite field leadoff single to right by Chipper Jones, but Brian McCann K'd swinging at a filthy 1-2 slider and Matt Diaz grounded into an inning ending 6-4-3. 5-4 Nats after eight.

• Clipp'd: 5-4 Nationals after eight and a half when Jonny Venters pitched a scoreless top of the ninth. Tyler Clippard entered the game looking for his 13th-straight converted save opportunity since taking over as the Nats' closer. Freddie Freeman lined a 92 mph fastball to right-center for a leadoff double and just the second hit Clipp's allowed since May 20th. The first since 6/9. Eric Hinske flew to center in the next at bat, ONE!, but Clippard walked Martin Prado to put two runners on with one out. Michae Bourn flew to center on a 1-0 fastball for out no.2 and Andrelton Simmons flew to Harper in right to end it. 13 for 13 since taking over as closer. 5-4 final, Nationals win,. 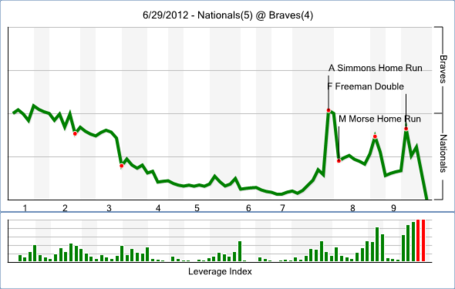