• LaRocheBomb: New York Mets' leadoff man Kirk Nieuwenhuis K'd swinging through a 95 0-2 fastball. Andres Torres chased a 2-2 slider into the dirt. David Wright managed to make contact with a 93 mph 2-0 heater, but a diving Bryce Harper made a nice catch for out no.3 of a quick, 11-pitch, 1-2-3 top of the first for Washington Nationals' right-hander Edwin Jackson. After committing three errors last night, the Mets' defense was back at it again in the bottom of the first, with second baseman Daniel Murphy literally booting a hard hit grounder off Bryce Harper's bat. Murphy had it bounce off his glove and he kicked it into right field as he chased it, allowing the Nats' 19-year-old outfielder to take an extra base. NY right-hander Jeremy Hefner had allowed just one walk and one home run in his first 17.1 IP, but gave up one of each in the consecutive AB's after Harper reached on the E, giving up a one-out walk to Ryan Zimmerman and a 3-run HR by Adam LaRoche, who took a hanging first-pitch curve to right for a no-doubter and a 3-0 lead. LaRoche's 9th of 2012. Hefner needs 25 pitches to get through the first.

• Less Walks, Please: Edwin Jackson retired the first two batters in the second on five pitches before issuing a two-out walk to Ike ".160 AVG" Davis, but the Nats' right-hander struck Josh Thole out with an 0-2 slider in the dirt and was through two scoreless on 25 pitches after a 14-pitch frame. Steve Lombardozzi hit a two-out single up the middle in the Nationals' second, and Daniel Murphy almost booted another grounder from Harper, but recovered in time to make an inning-ending throw to first to end the second. E-Jax walked Omar Quintanilla to start the top of the third. A sac bunt by the opposing pitcher moved the runner up and single to right by Kirk Nieuwenhuis brought Quintanilla around to make it a 3-1 game in Nationals Park. A 6-4-3 DP off Andres Torres' bat ended the top of the inning after 13 pitches with the Nats' right-hander up to 38 after three.

• E:1 = 1-Run Game: Daniel Murphy committed his second error of the night and the Mets' fifth in two games on a one-out grounder to second by Adam LaRoche, but Michael Morse hit into an inning-ending 6-4-3 DP to end the third inning in the nation's capital. David Wright started the top of the fourth by lining to right for a leadoff single after sending three hard-hit grounders down the third base line but just foul each time. A throwing error by Edwin Jackson on a pick attempt at first allowed Wright to take third, and he scored on a groundout to short by Lucas Duda. 3-2 game in the fourth. E-Jax walked Ike Davis for the second time tonight with two down, but Bryce Harper tracked down a fly to left-center by Josh Thole to bring an end to Jackson's 24-pitch 4th. Danny Espinosa hit a one-out single to right in the Nationals' fourth, but he was stranded at first when Jeremy Hefner set both Jesus Flores and E-Jax down to end a 21-pitch frame. 68 pitches after four for the Mets' starter.

• [Crane Kick] [Crane Kick]: Edwin Jackson started the fifth at 62 pitches. Eight pitches and three quick outs later, the Nats' right-hander was through a scoreless frame with his second 1-2-3- inning of the night. Ryan Zimmerman and Adam LaRoche hit back-to-back two-out singles in the Nationals' half of the inning to bring Michael Morse up with two down and the suddenly-locked-in Nats' outfielder got hold of a 1-2 two-seamer from Jeremy Hefner and sent an RBI single screaming by Ike Davis at first and into right for the Nationals' third-straight two-out hit. Zim scored on the play and the Nationals were up 4-2 after five. E-Jax issued his fourth walk of the night to Lucas Duda with two down in the top of the sixth, but he recorded his fifth K in the next AB when he got Daniel Murphy looking with an 0-2 fastball outside. The 16-pitch inning had Jackson up to 86 pitches after six.

After going 0-for-9 since his return from the DL, OF Michael Morse now has 4 hits in his last 7 ABs, with 2 doubles and 1 RBI. #Nationals

• Don't Pitch To Ike!!: The Nationals went down in order in a 13-pitch 6th by the Mets' Jeremy Hefner. Ike Davis, who started the game with a .160 AVG on the year and one hit and three walks in 16 June AB's, walked in his first two at bats and doubled to left in his third trip to the plate against Edwin Jackson tonight. A Josh Thole groundout moved Davis over to third and an Omar Quintanilla groundout out brought him in and made it a one-run game again in the seventh. 4-3 D.C. Jackson needed 14 pitches to get through the top of the frame, and he was up to 100 pitches even after 7.0 innings in Nats Park.

• LaRocheSacFly: Mets' left-hander Tim Byrdak took over for Hefner in the bottom of the seventh, putting Steve Lombardozzi on with a leadoff walk and giving up a bloop single to left Bryce Harper. Lombo tagged up and took third on a Zimmerman pop down the right field line and scored on an Adam LaRoche sac fly to center that made it 5-3 Nationals. Miguel Batista (aka Miss Iowa) and his rubber arm came on for Byrdak and got the Mets out of trouble, walking Michael Morse to put two on with two outs before an Ian Desmond groundout ended the frame. Nats' lefty Sean Burnett threw a 9-pitch, 1-2-3 eighth to take the two-run lead into the Nationals' half of the eighth. Miguel Batista put two runners on with one out before striking out Steve Lombardozzi and popping up Bryce Harper to end the eighth.

• E:6 Makes It "Interesting": Tyler Clippard came on in the ninth, looking for his fifth save of the season. The Nats' right-hander walked Lucas Duda in the first at bat, but popped Daniel Murphy up for the first out of the inning. ONE!! Ike Davis hit into what could have been a game-ending 4-6-3, but Ian Desmond threw one by Adam LaRoche for an E:6 that gave the Mets an extra out, but Josh Thole flew out to right to end the game. 5-3 Nationals. E-Jax gets the win. Tyler Clippard with the save.

• Doghouse's Post Game WPA Graph: "Game 54: Tonight was much easier to write up": 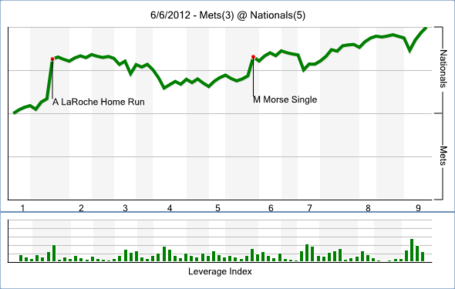