• Harper vs The Knuckler: The Washington Nationals' sinker-balling right-hander Chien-Ming Wang needed just nine pitches to retire the New York Mets in order in the top of the first inning this afternoon in the finale of the two teams' three-game series in the nation's capital. Mets' right-handed knuckleballer R.A. Dickey threw 17 pitches in his own scoreless first, which included his first career matchup with 19-year-old phenom Bryce Harper. Harper's introduction to the ways of the knuckler came with one down in the frame, and it was not pretty. The Nationals' 2010 no.1 overall pick K'd swinging when the veteran starter dropped a full-count curve on the young hitter after Harper had battled and fouled off three-straight two-strike knuckleballs. Ryan Zimmerman K'd swinging too in the next at bat and both of today's starters were quickly through the opening inning in Nationals Park.

• Duda!!: Chien-Ming Wang left a 1-0 sinker up for Mets' outfielder Lucas Duda, who took it for a ride to center, over Bryce Harper's head and off the base of the wall for a leadoff double in the top of the second. Two outs later, Wang walked Ike Davis and hit Omar Quintanilla to load the bases before the fourth ground ball out of the game ended his second scoreless frame. The 18-pitch inning had Wang up to 27 pitches, 17 of them strikes. R.A. Dickey retired the first five batters he faced before surrendering a two-out single to center by Nats' shortstop Ian Desmond. A passed ball on a pitch way inside on Danny Espinosa allowed Desmond to take second, but Dickey threw a 1-2 knuckler by a swinging Espinosa to end the second.

• Moar Grounderz: Chien-Ming Wang gave up a one-out single by Josh Thole in the third when the Mets' catcher took an 0-2 pitch the other way for a grounder through the left side of the infield. David Wright ripped the second consecutive one-out single by Ian Desmond at short to put two on in front of Lucas Duda. Wang walked the bases loaded for the second straight inning, but another grounder back to the mound allowed the right-handed sinker-baller to start an inning-ending 1-2-3 that got him through his third scoreless in D.C.

R.A. Dickey sent the 8-9-1 hitters down in order in a quick seven pitch third, after which the Mets' right-hander was up to 40 pitches, having allowed just one hit. Some miscommunication at first between a charging Chien-Ming Wang and first baseman Adam LaRoche resulted in both the pitcher and infielder letting the a two-out grounder roll slowly toward the bag as speedy Mets' infielder Omar Quintanilla avoided the tag and arrived safely at first, but Wang got out of his fourth scoreless frame when he got a inning-ending grounder to second from the opposing pitcher.

• Sinkerballer Hangs Slider: Bryce Harper got the green light and was swinging on R.A. Dickey's 3-0 fastball, but the Nats' rookie simply grounded out to Ike Davis for the first out of the Nats' fourth. David Wright made a nice backhand stab and throw to first to retire childhood friend, Ryan Zimmerman, and R.A. Dickey struck Adam LaRoche out to complete his own fourth scoreless this afternoon and 21.1 scoreless overall going back through his last three starts. Chien-Ming Wang gave up a leadoff single to center by Kirk Nieuwenhuis in the top of the fifth, but two outs later it looked like he might escape with another scoreless inning when he threw a hanging 2-1 slider that got taken for a ride to right-center by Lucas Duda, whose 10th HR sailed over the far left of the out-of-town scoreboard for a two-run blast and a 2-0 Mets' lead.

• Michael Morse hit a sharp grounder to short that Mets' third baseman David Wright managed to backhand, but Wright's off-balance throw from foul territory arrived late and pulled Ike Davis off the bag. The leadoff hit in the Nats' fifth was just the second off R.A. Dickey this afternoon. The New York knuckler got Ian Desmond swinging with a fastball inside for his 5th K of the day, however, and got an inning-ending 1-6-3 on the first pitch he threw to Danny Espinosa. 22.1 scoreless for Dickey.

• Omar Quintanilla started the sixth with a single up the middle that allowed R.A. Dickey to give away an out bunt the runner over. With left-hander Kirk Nieuwenhuis due up, Davey Johnson lifted Chien-Ming Wang and turned to left-hander Tom Gorzelanny, who got the second out of the inning on a swinging bunt back to the mound that moved Quintanilla to third. Gorzelanny got behind Mets' catcher Josh Thole, but got a groundout to first to end the top of the sixth. R.A. Dickey completed his sixth scoreless inning (and 23.1rd overall) by striking both Steve Lombardozzi and Harper out for K's no. seven and eight this afternoon after he'd issued walk no.1 to Rick Ankiel with one down. 78 pitches in 6.0 scoreless for Dickey in D.C.

• Leadoff Walks Rarely Come Back To Cause Trouble: Tom Gorzelanny walked leadoff man David Wright in the top of the seventh, and had the Mets' third baseman steal second and take third when Lucas Duda grounded out to Ryan Zimmerman in the next AB. Daniel Murphy, who entered the game in an 0 for 17 slump, and was 0 for 19 before he singled in the fifth, came through with his second straight hit of the game to bring Wright in and give the Mets a 3-0 lead after seven.

• Rally?: Ryan Zimmerman singled to start the bottom of the seventh, collecting just the third hit of the day off the Mets' R.A. Dickey. With Adam LaRoche up, Josh Thole let a knuckler get away from him, allowing Zimmerman to take second before LaRoche walked to put two on with no one out and Michael Morse due up. Omar Quintanilla made a nice play on a sharp grounder by Morse, throwing to third for the force after cutting the ball off on its way to left. One down. Make that three, as Ian Desmond grounds to third where David Wright fields, steps on the bag and throws to first to end the seventh. Double play. 3-0 NY after seven.

• Harper?: Tom Gorzelanny retired the Mets in order in the top of the eighth. R.A. Dickey got the first out of the Nationals' half of the inning on a groundout to short by pinch hitter Xavier Nady. 24.2 scoreless for Dickey, but a one-out single to center by the Nats' backup backstop Jhonatan Solano ended Dickey's day after 7.1 IP in which allowed just four hits, but his scoreless inning streak would end if the runner scored. Mets' reliever Bobby Parnell walked Rick Ankiel to put two on, but got a grounder back to the mound from Steve Lombardozzi for out no.2 and a grounder to short from Bryce Harper to end the inning.

• Comeback?: David Wright sent a soft fly to short right in tof the ninth, and in spite of a diving effort by Bryce Harper the Nats' outfielder couldn't make the play. Triple for Wright, who stays at third on a groundout to first by Lucas Duda. Nationals' lefty Michael Gonzalez retired the next two batters, however, and the Nationals were going to need to score three runs off Mets' closer Frank Francisco. Ryan Zimmerma--- THE KIDS CALL HIM ZIM!! THE KIDS CALL HIM ZIM!!! Ryan Zimmerman takes Francisco deeeep and into the Red Porch seats in center for a solo HR. Zimmerman's third of 2012 makes it a 3-1 game. A nice backhand play and throw from short by Omar Quintanilla got the Mets the first out of the Nats' ninth. Michael Morse lined out to Andres Torres in center for out no. 2 and Ian Desmond's groundout ends it. Dickey gets his major league-leading 9th win and the Mets avoid the sweep. 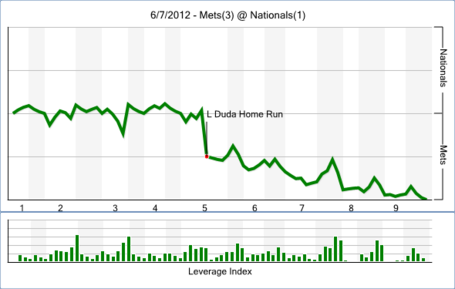