• 100 Years: Boy, oh Boy!! The first game of three for the visiting Washington Nationals in Boston's rinky-dink joint, pug-ugly Fenway Park, started with Nats' second baseman "Right Side" Danny Espinosa doubling off the big green wall in left field on a 2-1 heater from Red Sox' lefty hurler Felix Doubront. 19-year-old Nationals' outfielder Bryce Harper, who told reporters before the game he looked forward to stepping into the batter's box where Ted Williams once stood for the first time tonight, K'd chasing an 0-2 curve out of the zone away in his first at bat. Ryan Zimmerman hit a slow-roller to third in his first AB, and two outs after Espinosa's inning-opening hit the Nats' infielder was still standing on second. The Nats' big bopper, Michael Morse, came up with two outs looking for a lucky break, but it was duck soup for Doubront, who got the slugging outfielder looking with a 77 mph curve to end a 15-pitch first. Nuts! 23-year-old Nationals' right-hander Stephen Strasburg was keen to get off to a good start in his 12th outing of 2012, and he did, getting Red Sox' outfielder Daniel Nava swinging at a 91 mph 0-2 change then blowing Dustin Pedroia away with 99mph heat up high before popping Adrian Gonzalez up to end a 15-pitch, 1-2-3 bottom of the first. Yessir! It's curtains for the opening frame in Fenway Park in Boston, Mass...

• Two-Out Runs: Ian Desmond took third on a wild pitch by Felix Doubront that got by Red Sox' catcher Jarrod Saltalamacchia with two down after the Nats' shortstop had reached base safely on a one-out single to center, but Desmond was stranded at third as Boston's lefty recorded back-to-back K's to keep it scoreless through one and a half. Stephen Strasburg missed with a 3-1 fastball inside to David Ortiz, putting the Red Sox' slugger on to start the bottom of the second. Strasburg got help from his center fielder Bryce Harper on a liner to left-center by Saltalamacchia with eyes for the outfield grass that the speedy outfielder tracked down to make a humdinger of a snowcone catch. A 96 mph 1-2 heater to Kevin Youkilis got Strasburg K no. 3 of the game and out no. 2 of the second, but no one could catch outfielder Ryan Sweeney's two-out line drive single which fell in for a hit. Mike Aviles got hold of a 3-1 fastball up high in the next at bat and drove it to left and off the wall for a two-out, two-run double and a 2-0 Red Sox' lead. The 27-pitch inning had Strasburg up to 42 pitches after 2.0 in Boston.

• Then Comes The Thunder: Nats' leadoff man Danny Espinosa took a seven-pitch, one-out walk from the Red Sox' starter Felix Doubront, then Bryce Harper took a 94 mph 1-0 fastball to right for his eighth double of the year. Espinosa took third on Harper's two-bagger then scored on an RBI single to center by Ryan Zimmerman that cut the Sox' lead in half, 2-1. The second one-out walk of the inning by Doubront went to Michael Morse and it loaded the bases, but Doubront got out no.2 on a 1-2 curve to Adam LaRoche that was called strike three by home plate ump Doug Eddings much to LaRoche's dismay. Ian Desmond made the Red Sox' lefty pay though, lining an 0-1 cutter to right for a two-out, two-run double. Desmond's 16th double of 2012. 3-2 Nationals after two and a half.

• X Gonna Give It To Take It From You: Stephen Strasburg went to a full count and was up to 50 pitches on the night when he got Red Sox' outfielder Daniel Nava looking with a 98 mph four-seamer inside for K no. 4 in 2.1 IP. A 91 mph full-count change got Dustin Pedroia swinging for out no.2 and K no.5 and a tremendous effort by Xavier Nady on a catch at the wall as he collided with the right field fence ribs-first on a fly to right by Adrian Gonzalez preserved the Nats' and Strasburg's 3-2 lead. Nady brought one back in from over the wall and Strasburg was up to 59 pitches after three innings in Boston.

• Hahpa Goes Yahd!: Tyler Moore got a hanging 1-2 curve from Felix Doubront and doubled off the Green Monster for the first two-base hit of his career. One out later, Moore scored on a ground-rule double to center by "Right Side" Danny Espinosa. Espinosa's 11th double was followed by Bryce Harper's sixth, home run that is, as the 19-year-old outfielder connected with a 1-1 fastball from Doubront and hit a towering two-run home run to center some 420+ ft from the plate. 6-2 Nationals. Espinosa's got two doubles tonight. Harper's got a double and a home run after three at bats and the AL-style Nationals have the Red Sox' lefty up to 82 pitches after four. David Ortiz had a check swing called strike three for Strasburg's 6th K of the game and the first out of Boston's fourth. After a 99 mph fastball inside, Jarrod Saltalamacchia got an 83 mph 1-2 bender and didn't even come close. 7 K's for Strasburg and six in-a-row set down. And seven-straight retired after Strasburg gets Kevin Youkilis swinging with a 2-2 curve for the Nats' right-hander's 8th K.

• On Harper's HR in Fenway:

• 10 K's Thru 5.0: Strasburg's 13-pitch 4th had him at 72 pitches when he took the mound in the home half of the fifth. Five pitches into the inning the Nats' right-hander dropped an 82 mph 1-2 curve on Red Sox' outfielder Ryan Sweeney and recorded K no.9 of the night. Eight-straight set down. A 97 mph 2-2 fastball upstairs got Mike Aviles swinging for K no.10, out no.2, Strasburg's fifth straight strikeout and his ninth straight batter set down. And a groundout to short got Strasburg through a 14-pitch, 1-2-3 frame after which he was at 86 pitches after 5.0 IP with 10 Red Sox in-a-row set down...

• 119 Pitches, 13 K's: The Nationals added a run on a two-out RBI single by Bryce Harper that brought Tyler Moore in to score from second and make it 7-2 D.C. Harper was 3 for 4 after the sixth-inning single and Strasburg took the mound again in the sixth with a 5-run lead. Daniel Nava struck out for the third time in three AB's when the Nats' '09 no.1 overall pick dropped an 83 mph 2-2 curve on the Sox' leadoff man. K no.11 and 11-in-a-row set down. Dustin Pedroia singled to left with one down in the Sox' sixth for the Red Sox' first hit off Strasburg since the second. Adrian Gonzalez followed with a one-out double to left and off the Green Monster and a walk to David Ortiz in the next at bat had Strasburg up to 106 pitches on the night with the bases loaded. Nats' skipper Davey Johnson left his right-hander in, and he recorded his 12th K of the night with his 113th pitch, a 2-2 curve that got Saltalamacchia swinging and Strasburg's 119th pitch of the game was a 96 mph full-count fastball Kevin Youkilis that was called strike three. The livid Red Sox' infielder was tossed by home plate ump Doug Eddings for arguing the call. Strasburg was through six with 13 K's.

• AL Games Are Long: Nats' lefty Ross Detwiler put two on with two out when he gave up a one-out walk to Mike Aviles and a two-out single by Daniel Nava, but a fly to right by Dustin Pedroia ended a 20-pitch frame by the 26-year-old reliever. Detwiler came back out for the eighth, surrendering a solo HR to center by Adrian Gonzalez that made it a 7-3 game. It was also Gonzalez's 200th career home run, but it was the only run the Red Sox would score as the Nats' lefty completed his second inning in relief of Stephen Strasburg. After the Nationals came up empty against Red Sox' lefty Andrew Miller in the eighth, Brad Lidge returned to the mound for the first time since April 21st. Mike Aviles grounded out to second for the first out of the inning, but Lidge walked Nick Punto in the next at bat. A double off the wall in lefty by Daniel Nava brought the walk in to make it 7-4. That was it for Lidge. Tyler Clippard got a fly to center from Dustin Pedroia for out no.2 and a fly to center by Adrian Gonzalez ended the game. 7-3 Nationals win. 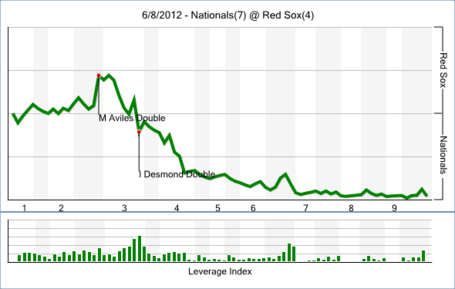