• Feed LaRoche Fastballs: After Daisuke Matsuzaka retired the first three Nationals' batters in a 12-pitch, 1-2-3 top of the first, Gonzalez needed just 12 pitches of his own to set the Red Sox down in order in the bottom of the inning. One pitch into the second the Nats' lefty had a 1-0 lead to work with as left-handed hitting Nationals' first baseman Adam LaRoche took a Daisuke Matsuzaka fastball deep to center field and into the visiting team's bullpen for his 10th HR of 2012. The Red Sox' first hit of the game came in the bottom of the second when David Ortiz hit an opposite field double to left that Steve Lombardozzi couldn't get to in the corner. A groundout from Kevin Youkilis failed to advance the runner, but Gonzalez crossed up his catcher, Jesus Flores, with Red Sox' 3B Will Middlebrooks up and gave Ortiz third before a groundout to Ryan Zimmerman and a pop to short right off Mike Aviles' bat ended the second scoreless in Fenway for the Nats' starter.

• Grounder. Desmond. Out.: Matsuzaka got Steve Lombardozzi looking with a 91 mph full-count fastball to end 17-pitch, 1-2-3 third. Gio Gonzalez got a fly to right from Darnell McDonald for the first out of the Red Sox' third, then threw a nasty 2-2 bender by Boston's backup backstop Kelly Shoppach for Gio's second K in 2.2 IP. A grounder to short from OF Daniel Nava ended the third. Grounder. Desmond. Out. and Gio Gonzalez was up to 39 pitches total and up 1-0 over Boston after a 14-pitch inning in Fenway Park.

• Morse = Thunder: Bryce Harper took a four-pitch walk from Daisuke Matsuzaka in the first at bat of the fourth inning, then the 19-year-old National took third on a single through short by Ryan Zimmerman that Sox' shortstop Mike Aviles dove for but missed. Matsuzaka recorded his 6th K in 3.1 IP when he threw a 92 mph 1-2 fastball by Adam LaRoche, but Michael Morse connected with a 1-0 heater from the Red Sox' right-hander and sent his 3rd two-base hit of the year into the right field stands on a hop for an opposite field, RBI, ground-rule double and a 2-0 Nationals' lead. Ian Desmond singled to right in the next at bat to bring both Zimmerman and Morse in, but Desmond got doubled up on a line drive to right by Danny Espinosa when Adrian Gonzalez made a slick sliding catch and a strong throw to first for a 9-3 inning-ending DP. 4-0 Nationals after three and a half.

• +Range, +Arm: Gio Gonzalez got a weak grounder to second from Dustin Pedroia, dropped a wicked 0-2 curve on Adrian Gonzalez and got help from Ian Desmond [who was halfway to first in the shift] on a sharp groundout to second from David Ortiz that ended a quick, seven-pitch, 1-2-3 4th. 4.0 scoreless for Gonzalez in Fenway Park, and he's retired nine-straight going back to David Ortiz's leadoff double in the second and 12 of 13 batters overall in his 12 start of 2012. Daisuke Matsuzaka gave up a leadoff double by Rick Ankiel in the Nationals' 5th, but retired the next three batters, and collected his seventh and eight K's in what would be his final innning of work.

• Gio's Streak Ends: After an error at first by Adam LaRoche put leadoff runner Kevin Youkilis on in the Red Sox' fifth, ending a streak of nine batters in a row set down, Gio Gonzalez collected his 4th K in 4.1 IP with a 95 mph full-count fastball that was called strike three on Will Middlebrooks. Mike Aviles grounded into a force at second in the next at bat, then stole second with Darnell McDonald up. Gonzalez walked McDonald, giving up the first free pass of the day, but then struck Kelly Shoppach out with a 1-2 two-seamer for his 5th K and 5th scoreless in Fenway Park.The 26-pitch inning had Gonzalez up to 72 pitches total.

• NatGio: Gio Gonzalez' 73rd pitch of the game got him the first out of the Red Sox' sixth when Daniel Nava grounded out to Ian Desmond at short. Gio Gonzalez stumbled but managed to field a swinging bunt from Dustin Pedroia in the next at bat, but the pitcher's throw to first sailed by Adam LaRoche allowing the Red Sox' infielder to take second. Hit for Pedroia and an E:1. Danny Espinosa sprinted back and leapt to catch a weak pop to short center off Adrian Gonzalez's bat for out no.2, however, and a David Ortiz grounder to second ended the Nats' lefty's sixth scoreless frame. The 12-pitch inning had Gonzalez at 84 pitches after six.

• Long 7th: Red Sox' reliever Franklin Morales completed his second scoreless inning of work and retired the sixth-straight National he faced in a 1-2-3 top of the seventh. In the bottom of the inning, Gio Gonzalez got help from former Gold Glove-winning third baseman Ryan Zimmerman, who made a spinning play and throw to first on a sharp grounder to third by Kevin Youkilis for the first out of the Red Sox' seventh. The Nats' lefty issued the second walk of the game to Will Middlebrooks in the next at bat and looked frustrated when Nationals' pitching coach Steve McCatty came out for a chat. Mike Aviles singled to right in the AB that followed the meeting, and Bryce Harper bobbled it, allowing Middlebrooks to take third.

That was it for Gio, who was replaced on the hill by Craig Stammen, who walked pinch hitter Ryan Sweeney to load the bases. Davey Johnson turned to the pen again, bringing Michael Gonzalez out to face pinch hitter Jarrod Saltamacchia, but the switch-hitting catcher (who had a .167/.259/.375 line as a RHB this year before the AB) doubled to left and off the Monster to drive two in and make it a 4-2 game. Gonzalez pounded Daniel Nava inside with a fastball for a called strike three and out no.2, and popped Dustin Pedroia up to end the seventh. Still 4-2 Nationals.

• Race To the 9th: Franklin Morales retired the seventh, eight and ninth-straight batters in the Nationals' eighth, setting Jesus Flores, Tyler Moore and Bryce Harper down in his 3.0 scoreless inning in relief. Nats' lefty no.3 of the day, Sean Burnett, threw a quick, 12-pitch, 1-2-3 bottom of the eighth, retiring Adrian Gonzalez, David Ortiz and Kevin Youkilis to preserve the Nats' two-run lead. Red Sox' right-hander Alfredo Aceves continued the Boston bullpen's dominance of the Nats' hitters with another 1-2-3 frame in the top of the ninth. 15 on a row set down. Tyler Clippard jogged out to the mound in the bottom of the 9th looking for save no.7. Will Middlebrooks popped up to Adam LaRoche foul of first. ONE!! Mike Aviles flew out to Roger Bernadina in left. CHOMP! TWO!! But Ryan Sweeney kept hope alive with a two-out line drive double to right for the Red Sox' first hit in seven at bats.

Jarrod Saltalamacchia came up with two down after doubling in his first at bat in the seventh, and grounded weakly to first to end the game. 4-2 Nationals win. Clipp's 7th save. Gio Gonzalez's 8th win. And another series victory in the books. 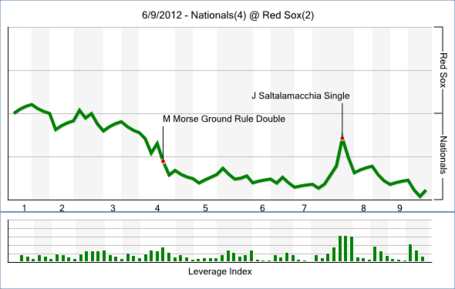