• Jump On Hudson!: Washington Nationals' All-Star rep Gio Gonzalez took the mound this afternoon in the bottom of the first in Turner Field with a 4-0 lead over the Atlanta Braves. The Nats' batters collected four hits and four runs off Tim Hudson in the top of the first. Leadoff man Steve Lombarozzi hit a ground rule double to right to start the game, Bryce Harper singled and Ryan Zimmerman took a 2-1 sinker to center for a two-run double and a 2-0 lead. Zim's 14th double was followed by a Michael Morse groundout that moved the Nationals' third baseman to third and an Adam LaRoche sac fly that brought Zimmerman in for a 3-0 Nats' lead early. Ian Desmond, who learned he was one of three Nats going to Kansas City for the 2012 All-Star Game (along with Gio and Stephen Strasburg), walked with two down and then came around to score run no. 4 of the game and run no. 5,000 in Nationals' history when Braves' center fielder Michael Bourn misplayed a Rick Ankiel line drive allowing Desmond to score from first. 4-0 Nationals after a half.

Jason Heyward singled to right with two down in the Braves' first, but Gio Gonzalez completed a scoreless opening frame on 18-pitches. 4-0 Nats after one.

• Andrelton - A-n-d-r-e-l-t-o-n: After a 24-pitch, 4-hit, 4-run first, Braves' right-hander Tim Hudson needed just eight pitches to retire the Nationals in order in the top of the second. Gio Gonzalez had the first two outs of the Braves' second nine pitches into the inning, but Atlanta's rookie shortstop Andrelton Simmons fouled off eight two-strike pitches and eventually walked in an epic 14-pitch at bat. Braves' catcher David Ross followed with a two-out single and a free pass to the opposing pitcher loaded the bases before Michael Bourn lined to Desmond at short to end a 33-pitch second by the Nationals' left-hander. 51 pitches for Gio in 2.0 IP, 4-0 Nats.

• LARRRRYY!!!: Adam LaRoche, who was 2 for 3 yesterday at Turner Field, hit a sac fly to score a run in his first at bat today, and then singled with two down in the Nats' third. The former Braves and current-Nationals' first baseman was stranded at first two pitches later, however, when Ian Desmond flew to center to end a 10-pitch third by Hudson. 42 pitches overall through three for the Braves' starter. Gio Gonzalez was up to 59 pitches in the third when he gave up a one-out single to center by Jason Heyward. The Braves' outfielder then scored on an RBI double to right by Chipper Jones that made it 4-1 Nationals after three in Turner Field. The 24-pitch frame had the Nats' starter up to 75 pitches total after 3.0.

• Hudson Settles In: Tim Hudson gave up four hits and four runs in the first, then threw three scoreless, giving up just a hit and a walk over the three innings that followed his long opening frame. The Braves' right-hander walked the opposing pitcher, Gio Gonzalez, with two down in the fourth but a line drive to first off Steve Lombardozzi's bat ended a 15-pitch inning, after which Hudson was at 57 pitches overall. Gio Gonzalez needed just nine pitches to retire the Braves in order in the bottom of the fourth, which ended with the Nats' left-hander getting the opposing pitcher looking at a 94 mph 1-2 four seamer. 84 pitches, 3 K's after four.

• TKCHZ!!: With one out in the top of the fifth, Ryan Zimmerman got a hold of a hanging 1-1 curve from Tim Hudson and crushed it, sending it soaring out to left field and over the "Outfield Pavilion" seats into the "Terrace Outfield" section in Turner Field. Initial Estimate?: Zimmerman's HR went about 430-50ft to left. 6th HR of 2012 for the Nats' third baseman makes it 5-1 after four and a half. A 14-pitch, 1-2-3 frame in which Gio Gonzalez collected his fourth K with a 2-2 curve to Michael Bourn, ended with the Nats' lefty at 98 pitches overall on the afternoon. Ian Desmond doubled for the 24th time this year on a 0-1 splitter from Tim Hudson in the top of the sixth. One out later, a wild pitch with Jhonatan Solano up allowed Desmond to take third and he then scored on a Jhonatan Solano grounder to first that Freddie Freeman couldn't handle. 6-1 Nats after five and a half.

• Freht-E: Gio Gonzalez came back out for the sixth, but 11 pitches and two walks into the inning he was at 109 pitches overall with Freddie Freeman at the plate. Gio got a visit from Nats' pitching coach Steve McCatty, but stayed in to face the left-handed hitting Braves' first baseman, who took a 94 mph 2-2 fastball to right and into the outfield seats for a three-run blast that made it a 6-4 game. 10th HR of the year for Freeman. Gio Gonzalez was done: 5.0 IP, 5 H, 4 R, 4 ER, 4 BB, 4 K's, 114 P, 64 S, 5/3 GO/FO. Craig Stammen took over for Gonzalez and retired the next three batters in order, but it was a two-run game after six.

• Stay-Min: Adam LaRoche took a 1-0 fastball from Braves' RHP Anthony Varvaro to deep center field, but ALT CF Michael Bourn caught it on the track for out no.3 to end a 12-pitch, 1-2-3 inning by Atlanta's reliever. Martin Prado took second on a one-out bloop single to left that fell in between Ian Desmond and Roger Bernadina in the Braves' seventh. Bernadina over-ran it, allowing the Braves' left fielder to take second with Jason Heyward due up. The Braves' right fielder flew out to Rick Ankiel in center, deep enough for Prado to take third, but Stammen got a groundout from Chipper Jones to end the seventh with the score still 6-4 Nats.

• Bullpen Battle: Anthony Varvaro struck out the side in the Nats' eighth on 14 pitches. 32 pitches, 3 K's in 2.0 scoreless from the Braves' right-hander. Nats' lefty Sean Burnett gave up back-to-back one-out singles by Freddie Freeman and Andrelton Simmons after he'd struck Dan Uggla out to start the Braves' eighth. David Ross K'd swinging over a 2-2 slider in a seven-pitch at bat for out no.2 and Matt Diaz grounded into a force at second to end the bottom of the inning with the score still 6-4 Nats.

• #LomboLobby Loves Steals: Steve Lombardozzi was hit by a pitch by Braves' Jonny Venters and stole second (1st MLB SB) with Bryce Harper up before the Nats' 19-year-old outfielder took a one-out walk. Ryan Zimmerman then came through with an RBI single that brought Lombardozzi around to make it 7-4 Nats. That's all for Venters. Cristhian Martinez got a potential DP grounder out of PH Tyler Moore, but a low throw to second by Chipper Jones, a hard slide into the bag by Zimmerman and a wide throw to first by Dan Uggla combined to let Harper score for run no. 8. 8-4 Nationals after eight and a half. 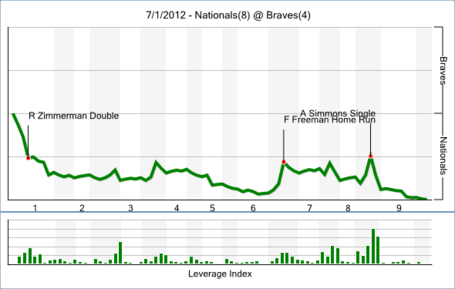