Share All sharing options for: Washington Nationals 5-1 Over Miami Marlins; Jordan Zimmermann Strong Again In Win Over The Fish.

• New Pitcher, New Red Helmets: Two hours after the Washington Nationals announced that they'd signed 2012 1st Round pick Lucas Giolito for $2.925M just moments (literally seconds apparently) before the 5:00 pm EDT deadline to ink this year's picks, the Nats' started the second-half of the 2012 schedule with the first game of four in Marlins Park in Miami, where they were swept in three-straight in a late May series with the Fish earlier this season. 2010 no.1 overall pick Bryce Harper singled off Marllins' right-hander Josh Johnson with one down in the opening frame, took second on an error by Logan Morrison on the play, then stole third one out later as the Fish starter and infielders Jose Reyes and Hanley Ramirez fell asleep on the field. Neither infielder covered third while they chatted between pitches, and Harper broke for the bag and took it without a throw. (ed. note - "+awareness by Harp.") Harper was stranded at third, however, when Michael Morse K'd looking at what the Nats' slugger thought was ball four Johnson and the so-called "second-half" of the season was underway with a scoreless top of the first...

• Two N's, 2.0 Scoreless: After a 12-pitch bottom of the inning for Nats' right-hander Jordan Zimmermann, Adam LaRoche lined a 2-0 fastball from Josh Johnson off the lime green wall in the right field corner for his 21st double of 2012. Ian Desmond got hold of a 95 mph 1-0 fastball from Johnson, and sent an RBI line drive to right, singling to drive LaRoche in and collect his 52nd RBI of the season. 1-0 Nats' lead. Hanley Ramirez singled to start the second, but got thrown out trying to take the extra base when Steve Lombardozzi misjudged the weak pop but recovered in time and made a strong throw to second. Marlins' right fielder Justin Ruggiano singled off Zimmermann in the next at bat. One out later he stole second and took third on a throwing error by Nats' catcher Jesus Flores, but he was stranded there when John Buck lined out softly to Danny Espinosa at second to end a 15-pitch inning for the Nats' right-handed starter.

• TKCHZ!!: Bryce Harper reached on a fielder's choice in his second at bat, hustling to first to beat out a potential DP grounder to second after Lombardozzi started the inning with a single of his own off Josh Johnson. The Marlins' starter was down 3-0 after a 3-1 slider to Ryan Zimmerman ended up bouncing off a wall deep in center field in Marlins Park, out near Red Grooms' psychedelic palm tree, cloud, flamingo, leaping marlin and flying seagull-covered HR sculpture of bright pink, aqua, orange and blue water and fun. Zimmerm--- THE KIDS CALL HIM ZIM!! THE KIDS CALL HIM ZIM!!! Zimmerman's 9th HR of 2012 and his first in 34 career AB's against the 28-year-old Josh Johnson.

• Jordan Zimmermann Is Legit: Jordan Zimmermann gave up a one-out walk to Jose Reyes in the Marlins' third, then threw a pickoff attempt by Adam LaRoche to give the former Mets' shortstop second, but Reyes was stranded there when the Nats' right-hander struck Carlos Lee out to end a 17-pitch inning at 44 pitches overall on the night. 2 K's, 3.0 scoreless, 3-0 Nats. Danny Espinosa singled to start the Nationals' third, but he was doubled up on a Jesus Flores' lineout to second. Two pitches to the opposing pitcher later, Josh Johnson was through a scoreless, 11-pitch 3rd. Zimmermann needed just 13 pitches to strike out the side in the bottom of the fourth, collecting his third, fourth and fifth K's from LoMo, Hanley and Ruggiano.

• Zim + Cortizone = Hot: Ryan Zimmerman singled through short with two down in the fifth, but was stranded when Michael Morse grounded out to end the top of the frame. Jordan Zimmermann retired the Marlins in order in 13 pitches in the bottom of the fifth, collecting his sixth K on the way to retiring the sixth, seventh and eighth-straight batters going back to the one-out walk to Jose Reyes in the third. 72 pitches overall through 5.0 IP. Adam LaRoche lined to center to start the sixth, then took second on an Ian Desmond bunt single and third on a fly to center by Danny Espinosa. Desmond moved himself into scoring position by stealing his 12th base of 2012, then both runners scored in a quick succession on a soft pop to left by Jesus Flores that fell in front of Logan Morrison. 5-0 Nationals after five and a half in Marlins Park.

• Help From Harper: Jose Reyes broke up Jordan Zimmermann's streak of eight-straight batters retired with a leadoff single to center in the Marlins' sixth. Two outs later, with Reyes still on first, Logan Morrison hit another shallow pop to center, but Bryce Harper made a diving catch to end a 15-pitch sixth inning by Jordan Zimmermann, who was through 6.0 scoreless on 87 pitches and up 5-0 Nats over Marlins.

• Zimmermann's Done, Then Fun: Wade LeBlanc gave up Ryan Zimmerman's second single and third hit in four at bats on a hard-hit grounder through the right side of the infield with one down in the Nationals' seventh, but two outs later LeBlanc had 1.2 scoreless in relief on the board. Henry "Lightning" Rodriguez started the bottom of the seventh in place of Jordan Zimmermann, whose night ended after 6.0 IP, 4 H, 0 R, 1 BB, 6 K's, 87 pitches, 61 strikes, 2/7 GO/FO. Rodriguez started behind 3-0 to Hanley Ramirez before striking the Marlins' third baseman out with three-straight fastballs. Rodriguez issued a one-out walk to Justin Ruggiano, then let the Marlins' outfielder steal second and third as he walked Jose Reyes before giving up an RBI single by John Buck. 5-1. H-Rod was done. Nats' lefty Michael Gonzalez came on in relief and got two outs with one pitch when Austin Kearns lined back to the mound and Buck got doubled up. 5-1 Nats after seven in Florida.

• [Fish] Wrap It Up: Marlins right-hander Ryan Webb gave up Danny Espinosa's 21st double of 2012 in the top of the eighth, but Espinosa was caught trying to steal third and Jesus Flores grounded out to short to end a 16-pitch inning by the Fish reliever. A two-out single by El Caballo Carlos Lee ended Ryan Mattheus' night after just 0.2 IP. Davey Johnson brought Sean Burnett out to face Logan Morrison and the left-hander ended the bottom of the eighth when he struck LoMo out swinging with a 2-2 sinker. Randy Choate retired the Nationals in order in the eighth and Nats' closer Tyler Clippard came out the bullpen for the ninth.

• Clippard: It was a non-save situation, but Davey Johnson went with Tyler Clippard. Hanley Ramirez battled for eight pitches and singled to start the ninth. Justin Ruggiano popped to short left where Ian Desmond caught out no.1. ONE!! Emilio Bonifacio battled for six pitches before striking out for out no.2. TWO!! John Buck couldn't hold up on a check-swing strike three and the Nationals took the first of four, 5-1. Jordan Zimmermann gets the win....

• Finally!!: And the Nationals finally beat Josh Johnson! It only took them 16 starts vs Johnson to do it!! 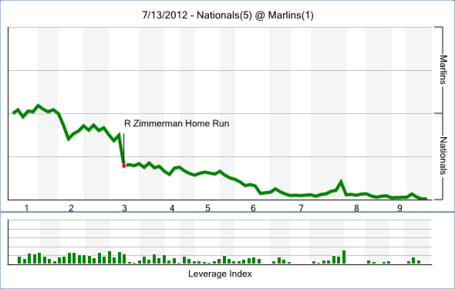