• The Pride of Hialeah: Yes, the Washington Nationals wanted 33-year-old veteran Mark Buehrle when he was a free agent this past winter. They made an offer, but when the left-hander signed with the Nats' NL East rivals in Miami, D.C. GM Mike Rizzo made a trade with the Oakland A's that landed the Nationals 26-year-old lefty Gio Gonzalez. In 17 starts and 101.2 IP so far this season, Gonzalez is (12-3) with a 2.92 ERA, 2.52 FIP, 3.72 BB/9 and 10.45 K/9 to Buehrle's (8-8), 3.25 ERA, 3.87 FIP, 1.27 BB/9 and 5.23 K/9 in 17 starts and 113.2 IP. The two pitchers met head to head in Marlins Park tonight. Ryan Zimmerman hit his 17th double of 2012 off Buehrle in the top of the first, but the Nationals' third baseman was stranded at second when Michael Morse K'd looking at a 2-2 cutter, ending a 13-pitch frame by the Marlins' starter. The 10th pitch of Gio Gonzalez's first at bat back home and on the mound in Miami brought the count full in an epic opening AB with Marlins' infielder Jose Reyes. The Fish shortstop popped the 13th pitch up to Adam LaRoche in foul territory off first, and the Nationals' left-hander got the next two outs with five pitches to end an 18-pitch bottom of the first in Marlins Park.

• +Efficiency: Mark Buehrle gave up a leadoff single to right on the first pitch he threw to Adam LaRoche in the Nats' second, but the Fish lefty had two outs after two pitches when Ian Desmond hit the first pitch he saw to second to start a 4-6-3 DP. Five pitches later, Nationals' outfielder Tyler Moore flew to left to end a 7-pitch inning for the Marlins' starter. Justin Ruggiano took a 2-2 curve outside for a called strike three. Hanley Ramirez worked the count full before he K'd looking at another backdoor bender. Grounder. Desmond. Out. 14-pitch second for Gio. Bryce Harper missed on back-to-back breaking balls from Buehrle then took a 1-2 curve for a called strike and K'd looking to end the Nats' third after just seven pitches from the Marlins' lefty. Donovan Solano missed a 1-2 change and both catcher John Buck and pitcher Mark Buehrle K'd looking at two-strike curves from Gio Gonzalez as the Nationals' starter responded with a 13-pitch bottom of the inning, after which he'd retired the ninth straight batter he'd faced to start the game.

• Not El Caballo!!: Gio Gonzalez needed 45 pitches to get through three vs Miami. Mark Buehrle needed seven pitches to get Ryan Zimmerman for the first out of the fourth, and he got help from Jose Reyes on a Michael Morse grounder to third that bounced off Hanley Ramirez and right to the Marlins' shortstop for a routine 5-6-3 putout and out no. 2. Four pitches and an Adam LaRoche groundout to first later, the Fish starter was through four innings on 39 pitches. Gio Gonzalez gave up a leadoff single by Jose Reyes that was Miami's first hit, and the Marlins gave up an out when Emilio Bonifacio bunted Reyes over to second. El Caballo Carlos Lee stepped in with a runner in scoring position and one down, and lined to right-center on a 3-1 fastball outside from Gio for a bloop single and an RBI. 1-0 Miami. Gio Gonzalez "missed" with a 2-1 fastball outside to Hanley Ramirez, but got a fly to right with a 93 mph 3-1 four-seamer to end the bottom of the fourth after 20 pitches at 65 pitches overall.

• +Range, +Arm, +Bloop Reader: Ian Desmond bunted his way on to start the fifth, sending a roller out to Carlos Lee and sliding in headfirst at first to avoid the first baseman's tag in a rare instance of that approach actually working. The Nats' SS then got picked off first by Buehrle but arrived safely at second when the throw from El Caballo to Jose Reyes hit him in the back (while he was out of the basepath on the infield grass, admittedly). Tyler Moore took the first walk of the game from Mark Buehrle in the next at bat, and Jesus Flores followed the free pass up with a broken bat RBI single to left that scored Desmond from second to make it a 1-1 game. Buehrle threw to third on a bunt by Gio Gonzalez to cut down the lead runner, then one out and a second walk later struck Ryan Zimmerman out to end a 21-pitch frame with the bases left loaded.

• [Shakes Fist]: "BONIFACIO!!!": Emilio Bonifacio bunted his way on to start the Marlins' fifth. Fish left fielder Donovan Solano bunted Bonifacio over to second, and a John Buck line drive to right-center brought him home to make it 2-1 Miami. Gio Gonzalez retired the next two battters on four pitches to limit the damage and complete a 13-pitch frame at 78 pitches overall in 5.0 innings. A 1-2 cutter got Michael Morse swinging for the first out of the 6th and Mark Buehrle's 5th K. Adam LaRoche missed a 1-2 change and became victim no. 6. Ian Desmond made contact with a 2-1 fastball, but just rolled a grounder out to Marlins' second baseman Omar Infante to end a 12-pitch sixth by the Miami lefty. 72 pitches through six innings pitched for Buehrle. Justin Ruggiano hit a two-out double to the left-center gap for the Marlins' fifth hit off Gio Gonzalez, but the Nats' left-hander got Hanley Ramirez looking at backdoor bender for out no.3 of the inning and K no. 9 in 6.0 IP, after which he was up to 93 pitches and down 2-1.

• Leadoff Walks Rarely Cause Damage: Mark Buehrle gave up a leadoff single by Tyler Moore in the Nationals' seventh, but after Jesus Flores bunted Moore over, the Marlins' left-hander retired the next two batters to end a 14-pitch frame with the runner stranded at second. Craig Stammen took over for Gio Gonzalez in the Marlins' seventh, ending Gio Gonzalez's night after 6.0 IP, 5 H, 2 R, 2 ER, 0 BB, 9 K's, 93 pitches, 67 strikes, five groundouts and three flyouts. Stammen walked Bonifacio to start the inning, issuing the first free pass by the Nationals all night. Bonifacio promptly stole second and took third on a Scott Cousins groundout. Stammen walked John Buck on one pitch to put two on. Marlins' manager Ozzie Guillen hit for Buehrle to get professional pinch hitter Greg Dobbs up with runners on the corner and one out, but after battling for seven pitches, he hit into an inning-ending 6-3. 2-1 Fish after seven.

• Running Out Of Outs: Bryce Harper K'd swinging at an 0-2 slider from Marlins' lefty Randy Choate. Steve Cisek replaced Choate with Ryan Zimmermann and Michael Morse due up. Zimmerman grounded out to first and Morse K'd looking and the Marlins took their 2-1 lead into the bottom of the eighth. Omar Infante singled with one down in the Marlins' eighth. Stammen walked Carlos Lee in the next AB and let the Marlins' pull off a double steal, but retired the next two batters to keep it close after eight.

• No Bell?: No Heath Bell, as the former Padres' closer is once again in Ozzie Guillen's doghouse, so Cisek came back out for the ninth. Scott Cousins backed up into the out-of-town scoreboard in left and made the catch on an opposite field blast by Adam LaRoche the died on the track. Cisek painted the outside corner with an 0-2 fastball to Ian Desmond that got the Nats' shortstop looking for out no.2, but Roger "The Shark" Bernadina kept the inning alive with a two-out single and stole second to get himself in scoring position, but Jesus Flores K'd swinging to end the game. 2-1 Marlins. 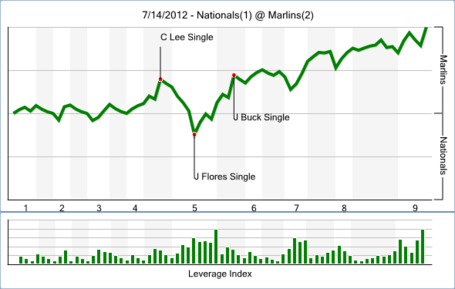