• Strasburg? Losing Streak?: 23-year-old Washington Nationals' right-hander Stephen Strasburg had a streak of 15.0 scoreless innings against the Nats' NL East rivals from Miami going at the start of this afternoon's game against the Marlins in Marlins Park. The Nats' '09 no.1 overall pick hadn't allowed the Fish to push a run across against him since the third inning of a 9/17/11 start against Miami in the nation's capital. Strasburg threw 3.0 scoreless innings after giving up the run that day, and then finished the year with six scoreless against the Marlins in the season finale in Sun Life Stadiu_ last September, striking out 10 and allowing just two hits and a walk in a 3-1 win. When Strasburg faced the Fish earlier this season, back on April 21 in Nats Park, he added another six scoreless, giving up just four hits and a walk while striking out six in a 3-2 win in which he received no decision. Strasburg entered his 18th start of the 2012 campaign on a three-game losing streak. He started the outing with a 95 mph fastball to Marlins' shortstop Jose Reyes that just missed inside. 12 pitches later, a 90 mph 0-2 change in the dirt got El Caballo, Carlos Lee, swinging to end a 1-2-3 bottom of the inning...

• Ricky vs Stephen: Marlins' starter Ricky Nolasco needed 10 pitches to retire the Nationals in order in the first. After a seven-pitch second, he'd retired six-in-a-row to begin his own 18th start of the 2012. Logan Morrison singled to left on a 96 mph 1-0 fastball from Stephen Strasburg to start the bottom of the second. Morrison almost got doubled up at first when Bryce Harper tracked down what looked like a gapper to right-center off Hanley Ramirez's bat with LoMo running. Harper's throw in was off-line, so Morrison got back to the bag safely, then took second on a broken bat single to center by Greg Dobbs, but Strasburg got Emilio Bonifacio to fly to center and struck John Buck out to end a 20-pitch frame with his seventeenth-straight scoreless inning-in-a-row against the Marlins.

• Don't Shake Off The Onion!!: Roger Bernadina battled for nine pitches, but popped out to Hanley Ramirez, who had to reach into the crowd to catch the first out of the third. After Jhonatan Solano K'd swinging at a diving 80 mph 1-2 splitter, Stephen Strasburg took a five-pitch, two-out walk to give the Nationals their first baserunner against Ricky Nolasco, but the Marlins' starter got a fly to center from Steve Lombardozzi and Emilio Bonifacio's catch ended his third scoreless inning. 9 of 10 batters retired and no hits allowed through three. Stephen Strasburg shook catcher Jhonatan Solano off before firing the sixth-straight fastball to the opposing pitcher, and Ricky Nolasco lined the pitch to right for a leadoff single in the Marlins' third. Jose Reyes took an 0-2 curve to right for the second-straight hit to start the inning, and one out later a single to center by El Caballo Carlos Lee loaded the bases with one down. Nolasco didn't test Roger Bernadina's arm and the Marlins paid for it. Logan Morrison took a letter-high fastball for a called strike three and out no.2 of the third. Strasburg "missed" inside with 1-2 change to Hanley Ramirez, then went to a full count before he got a groundout to third that Ryan Zimmerman handled. No score after 3.0. Strasburg up to 60 pitches after a 28-pitch frame.

• Hows About A Hit?: Ricky Nolasco set the Nationals in order on 12 pitches in the fourth, retiring 12 of the first 13 batters he faced today in 4.0 scoreless and hitless innings pitched. Emilio Bonifacio beat Steve Lombardozzi to the hole and sent a hard hit grounder back up the middle, taking second easily by hustling out of the box. Bonifacio turned back wisely and stayed at second as Roger "The Shark" Bernadina made a diving catch on a line drive to center to rob John Buck of an extra base hit, and the Marlins' CF was stranded there when Stephen Strasburg popped Ricky Nolasco up to end the fourth. Still 0-0. 71 pitches for Strasburg after an 11-pitch frame.

• DIY w/ 2 outs: Michael Morse sent a weak line drive to left to start the fifth with the Nats' first hit off Ricky Nolasco, but Morse was erased on a force at second on a Danny Espinosa grounder for out no.1. Both Espinosa and Roger Bernadina should have been safe on a grounder to second by the Shark in the next at bat, but only Espinosa was as first base ump D.J. Reyburn blew the call at first and punched Bernadina out in spite of the fact that Omar Infante's throw to Carlos Lee arrived at the bag a half-step late. Ricky Nolasco walked Jhonatan Solano intentionally to get to the opposing pitcher, but he must not be aware that Strasburg (.360/.407/.640 before today) can swing it and he paid for his ignorance/mistake, giving up an RBI single to right that scored Espinosa to give Washington a 1-0 lead. #DIYStras. Steve Lombardozzi followed with an RBI single to bring Solano in and compound the error in judgement on that IBB and the Nats led 2-0 after four and a half in Miami.

• 20.0 Scoreless IP vs the Fish: After giving himself a one-run lead, Strasburg retook the mound and struck Jose Reyes out on three pitches, getting the Marlins' SS looking with a 96 mph 0-2 fastball that was right down the pipe. Strasburg missed inside with a 95 mph full-count fastball to Omar Infante, walking his first batter of the game. An infield single by Carlos Lee put two runners on when Ryan Zimmerman threw wide of second (on a tough play) and Steve Lombardozzi threw late to first (in spite of a nice effort). Roger Bernadina made another diving play in center for out no.2, robbing Logan Morrison of what might have been an RBI single, and Strasburg struck Hanley Ramirez out with a 2-2 bender to strand two and collect his 6th K in 5.0 IP. A 23-pitch inning has Strasburg at 94 pitches after five. 20.0 scoreless IP in a row against the Fish for Stras.

• SQUEE--- DUCK!!!: Ryan Zimmerman and Adam LaRoche hit back-to-back singles off Ricky Nolasco to start the sixth. Michael Morse followed with the third-straight hit, singling to center to bring Zimmerman in from second and make it 3-0 Nats. LaRoche and Morse moved into scoring position on a wild pitch with Danny Espinosa up. Espinosa missed swinging at a 3-0 pitch from Nolasco when Davey Johnson gave him the green light to take a hack, but the Nats' second baseman ended up making contact with a full-count pitch, and he sent a sac fly to right to score LaRoche and make it 4-0 Washington. Nolasco was done after 5.1 IP, 6 H, 4 R, 4 ER, 2 BB, 2 K's. Wade LeBlanc took over and the Nationals helped him out of the inning when Roger Bernadina missed a sign and took a swing at a pitch with Morse charging from third on what was probably supposed to be a squeeze. Morse was out and Bernadina flew to right to end the frame. 4-0 Nationals after five and a half.

• Twenty-One: Stephen Strasburg started the sixth at 94 pitches. Four pitches later he had two outs after Greg Dobbs lined to short and Emilio Bonifacio flew to left. A full-count fastball got John Buck looking for out no.3 of the inning and K no. 7 of Strasburg's 18th start of 2012. 105 pitches total for Strasburg after the 11-pitch, 1-2-3 inning. 21.0-straight scoreless innings for Strasburg vs the Fish.

• Clipp'd: Tyler Clippard came on in a non-save situation and gave up a leadoff single to center by Greg Dobbs. A walk to Emilio Bonifacio in the next at bat earned Clippard a visit from pitching coach Steve McCatty. Clippard went to 2-0 against John Buck. A second-straight walk loaded the bases. Justin Ruggiano K'd swinging through a 1-2 fastball for out no.1. Jose Reyes popped the first pitch he saw up to Jhonatan Solano. TWO!! Omar Infante flew to foul territory in right and Bryce Harper and Steve Lombardozzi collide as Harper catches out no.3 to end the game. +Concentration. 4-0 Nats. 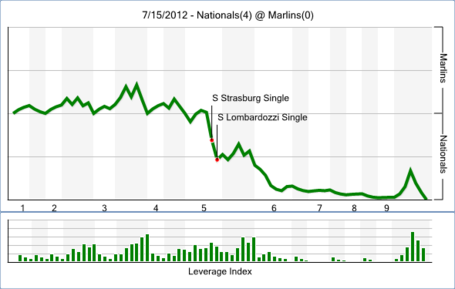