Miami Marlins' manager Ozzie Guillen apparently had a few words with home plate umpire Marty Foster about the amount of pine tar on Bryce Harper's bat after the Washington Nationals' outfielder's first at bat this afternoon in Marlins Park. When the 2010 no.1 overall pick stepped in again for his second AB in the fourth, he pointed his bat (a new one) towards the Marlins' dugout and in Ozzie Guillen's mind at least, pointed it in the direction of the Marlins' manager. At that point Guillen had another heated conversation with Marty Foster and exchanged words with Harper and the Nats' skipper Davey Johnson too, who was not amused by the 48-year-old first-year Marlins' manager's antics. After the game, the Nationals' 69-year-old skipper explained what had happened.

"Ozzie had complained that the pine tar was too high up on Harper's bat," Davey Johnson said, "And so we changed it and then he was still chirping about it. And it got on the umpire's nerves, it got on my nerves. He was trying to intimidate my player, I guess, you know, it's not going to bother our player. But he does what he has to do. I didn't really like it." 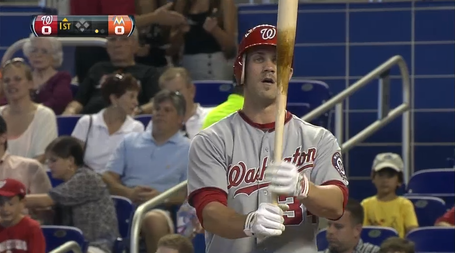 According to Miami Herald Marlins beat writer Manny Navarro (@Manny_Navarro on Twitter), Guillen declined to comment after the game...

In the post-game article on the incident, the Miami Herald's Mr. Navarro wrote that though Ozzie Guillen wasn't interested in discussing the incident, Marlins' outfielder Logan Morrison explained that he thought his own manager had gone about things in the right way, explaining first to Nats' third base coach Bo Porter that he thought Harper had pine tar too far up on his bat and then reacting poorly when he thought Harper showed him up in the next AB:

Logan Morrison: "'Ozzie did it the right way and then Harper came up the next time and pointed his bat at Ozzie. It was kind of showing him up,' Morrison explained.

"'He did him a favor by not going out there and telling him his pine tar was too high to the umpire. I don't know if it's an ejection. He did it in a way that isn't showing him up and Harper then showed him up was kind of a slap in the face.'" 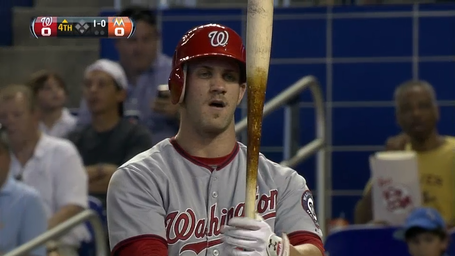 Harper too declined to comment, telling reporters as NatsInsider.com's Mark Zuckerman among others reported, that he had no idea what Guillen was yelling about and praising the manager as, "... a great manager to play for," and someone who is, "... going to battle for you, no matter what." As the Miami Herald's Mr. Navarro added, the only thing Guillen would say was that he would talk to Davey Johnson about the incident at some point in the future. 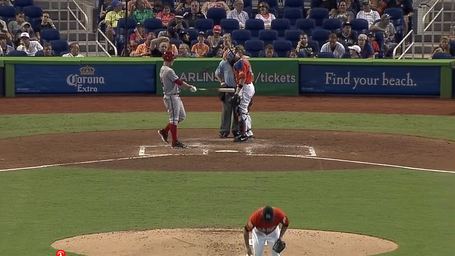 "'I could have said a lot of [expletive] about this kid,'" Guillen told the Miami Herald reporter, "'I've been praising this kid like everyday. The last three times they asked me about him, the only thing I said was he's a great player. What he did [today] was unprofessional.'" 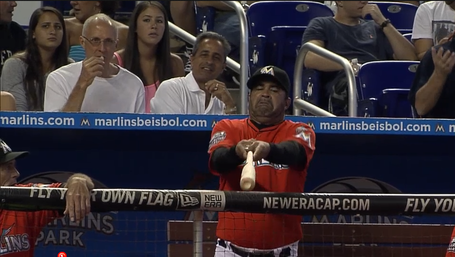 Harper went 0 for 4 on the day, but the Nationals won 4-0 on the strength of Stephen Strasburg's strong outing to take the two of the first three games of the four-game set in Florida. Game three tomorrow at 7:10 pm EDT. Edwin Jackson vs Carlos Zambrano. I'm sure everyone will be much more mature in tomorrow night's game.