• Cooler Heads Etc.: There was no retaliation tonight for Bryce Harper's pine-tar-based disagreement with Miami Marlins' manager Ozzie Guillen during the fourth inning of Sunday afternoon's game. The Washington Nationals' outfielder took a five-pitch walk from Fish right-hander Carlos Zambrano in his first at bat while some watched and wondered if the 32-year-old, 12-year-veteran Marlins' starter would exact revenge for his skipper by way of HBP on the Nats' 19-year-old rookie. Ryan Zimmerman singled in the next at bat to put two on for Adam LaRoche, but a line drive off the Nats' first baseman's bat went into a leaping Omar Infante's glove and the Marlins' second baseman doubled Bryce Harper up to end the top of the first of the series finale in Florida.

Emilio Bonifacio singled off Edwin Jackson and by Nats' second baseman Steve Lombardozzi for a one-out hit in the Marlins' first, and the speedy outfielder took second on a delayed steal and third on a throwing error by Jesus Flores. Carlos Lee hit a sharp grounder to third, but Ryan Zimmerman made the play, checked the runner and threw wide of first, but close enough for LaRoche to make the play. E-Jax walked Logan Morrison with two down, but Ryan Zimmerman made another slick play on a sharp grounder to third by Hanley Ramirez and threw to second for the inning-ending force after 23 pitches by Edwin Jackson. 0-0 after one.

• How Are Things On The Left Side?: "Left Side" Danny Espinosa hit a humpbacked liner over first and into the right field corner for a one-out triple off Carlos Zambrano in the Nationals' second. Roger "The Shark" Bernadina walked in the next at bat, and a sac fly from Jesus Flores followed, bringing Espinosa in from third to make it 1-0 Nats after one and half in Marlins Park. Edwin Jackson threw 14 pitches in a 1-2-3 bottom of the second after the Nationals gave him the lead.

• TKCHZ!!: Carlos Zambrano got the first two outs of the third with four pitches, but his fourth pitch to Ryan Zimmerman ended up in the Clevelander bar in left field in Marlins Park. Zimmerma-- THE KIDS CALL HIM ZIM!! THE KIDS CALL HIM ZIM!! Zim's 10th HR of 2012. 2-0 Nats after two and a half. Carlos Zambrano and Jose Reyes hit back-to-back singles to start the Marlins' third. A sac bunt by Bonifacio moved both runners into scoring position for Carlos Lee, and El Caballo went down low to get a 1-2 slider from E-Jax and drive them both in to tie the game with a one-out liner to center that made it 2-2. One out later, Hanley Ramirez got hold of a 94 mph 1-0 four-seamer and drove it to center and off the Red Grooms' HR sculpture for a two-run blast. Ramirez's 13th. 4-2 Fish. 24-pitch inning for E-Jax, 61 pitches through three.

• Shark Doubled Up?: Michael Morse and Danny Espinosa hit back-to-back singles to start the fourth, but Roger Bernadina ripped a grounder to second sharply enough that the Marlins could turn a 4-6-3 on the speedy Nats' outfielder. A groundout to short by Jesus Flores ended a 12-pitch frame by Zambrano, who was up to 55 pitches after 4.0 IP. Brett Hayes singled with one down in the Marlins' fourth, and took second on a sac bunt by Zambrano, but a Jose Reyes grounder to second ended a 10-pitch inning by E-Jax. Jackson walked to start the fifth, but one out later he was doubled up a line drive to short by Bryce Harper as the Nats hit into their third double play of the game. 4-2 Marlins after four and a half.

• Triple From Cycle: Ryan Zimmerman doubled to right and over Greg Dobbs' head for a leadoff opposite field two-bagger in the sixth. Double no.18 of the year for the Nats' third baseman left him 3 for 3 tonight and a triple away from the cycle after he singled with one out in the first and homered with two out in the third. One out later, Michael Morse followed with an RBI single to center and the Nats' cut the Marlins' lead in half when Zim scored. 4-3 Fish. Morse took third on Danny Espinosa's 22nd double of 2012, and Roger Bernadina walked to load the bases with one down and Jesus Flores due up, but the Nationals' catcher hit into the fourth DP of the game, sending a grounder to short to start an inning-ending, rally-killing 4-6-3.

Wade LeBlanc took over for Zambrano in the seventh. Logan Morrison dropped the ball after a nice effort tracking down a Steve Lombardozzi line drive to left. One-out single for Lombo. Bryce Harper battled LeBlanc for nine pitches before popping out to second, and he broke his already-cracked bat over his knee when he got back in the dugout. Ryan Webb took over for LeBlanc. A pick attempt got by Carlos Lee, allowed Lombardozzi to take second. A HBP on Zim put two runners on with one out. Randy Choate took over for Webb with LaRoche due up, and got the Nationals' first baseman swinging to strand two runners and end the top of the seventh. Still 4-3 Miami.

• Squeezed: Nats' reliever Michael Gonzalez gave up a leadoff double by Marlins' pinch hitter Justin Ruggiano in the Marlins' seventh. A sac bunt by Jose Reyes moved Ruggiano to third and a squeeze bunt by Emilio Bonifacio brought him home to make it 5-3 Miami. Heath Bell gave up a leadoff single by Michael Morse in the Nats' eighth, but the big Marlins' reliever got the next three outs when Danny Espinosa K'd swinging, Roger Bernadina flew to right and Jesus Flores swung through a 1-2 fastball to end the top of the eighth. Henry Rodriguez threw a 14-pitch, scoreless eighth and the Nats had three outs left to avoid splitting the series.

• This Guy Hates Splits: Marlins' lefty Mike Dunn came out for the ninth. Tyler Moore flew out to Bonifacio in center for out no.1. Lombardozzi lined out to short. Two down... but Bryce Harper kept hope alive with a two-out single to left that brought Ryan Zimmerman up against the left-hander. Zim took a 3-1 slider for a called strike two, and walked with two down. Adam LaRoche went down 0-2 quickly on two breaking balls from Dunn and took a 96 mph 1-2 heater for a called strike three. Marlins win, 5-3 final. 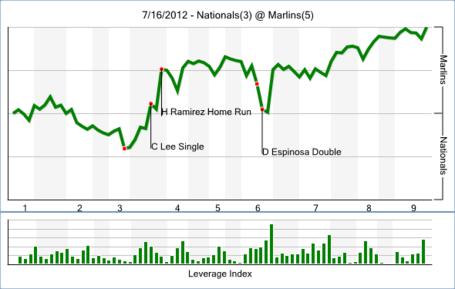