• Davey's Radar: Before 26-year-old Washington Nationals' right-hander Jordan Zimmermann made his 19th start of 2012 in tonight's game with the New York Mets, Nats' skipper Davey Johnson praised the work the '07 2nd Round pick has done so far this season. "[Zimmermann's] kind of gone under the radar," Johnson said, "But not our radar. He's always been well thought of as a very capable no.1 starter. He threw the ball great last year and he's been very consistent and even a notch better this year. Not only does he have good stuff, he's stingy with his pitches and he's going farther in games. He hasn't been a surprise to me, maybe to somebody else, but not to me." In his first 18 starts this season, Zimmermann's (6-6) with the NL's fourth-lowest ERA (2.48), a 3.59 FIP, 23 walks (1.78 BB/9) and 88 K's (6.19 K/9) in 116.1 IP.

Zimmermann's 19th start of 2012 (his second against the Mets) started with a 16-pitch scoreless first in which he gave up David Wright's 30th double of 2012, but nothing else. Ryan Zimmerman hits his 19th double of the year off Mets' right-hander Chris Young with two down in the bottom of the inning, but one pitch later the New York right-hander was out of the first after Adam LaRoche grounded out to end a 13-pitch opening frame.

• But Where Was Moore?: Nats' center fielder Bryce Harper showed off his range, sprinting to left-center to make a one-handed catch on fly ball off Lucas Duda's bat. Jason Bay K'd looking at an 0-2 slider in the next AB and after Andres Torres battled for seven pitches, he grounded weakly to first to end an 18-pitch, 1-2-3 second for Jordan Zimmermann. 34 pitches total in 2.0 scoreless. Michael Morse singled to center to start the Nationals' second, but was quickly erased on a 6-4-3 DP off Tyler Moore's bat. Danny Espinosa reached on a swinging bunt with two down, but was caught stealing by Mets' catcher Josh Thole to end a 14-pitch second by the Mets' starter. 0-0 after two.

• Two "N's", No Relation: Jordan Zimmermann needed 16 pitches to retire the Mets in order in the third, collecting his third K along the way. Chris Young needed just 12 pitches to set the Nats' 8-9-1 batters down in order in the bottom of the the third. David Wright collected his second hit in two at bats, singling to left on a 1-2 curve that fell in in front of a sliding Tyler Moore, but an 0-2 curve to Ike Davis got a grounder to second and a 4-6-3 DP ended the top of the fourth after just nine pitches from the Nats' right-hander. 59 pitches after four scoreless frames. Bryce Harper singled to start the Nationals' fourth, but he was halfway to third on a fly to center by Ryan Zimmerman when Andres Torres made an easy catch and doubled the Nats' 19-year-old rookie up at first. Adam LaRoche took a two-out walk from the Mets' starter, but a groundout by Michael Morse ended Chris Young's fourth scoreless after 19 pitches. 58 total for NY's right-hander. Still 0-0 in Nats Park.

• #STOPHITTINGDANNY!: A 95 mph 2-2 fastball sent Lucas Duda back to the bench. Jason Bay went the other way with a 2-1 slider from Jordan Zimmermann for a one-out single and the Mets' third hit of the night off the Nationals' righty. The Nats' couldn't double up Andres Torres on a weak grounder to third, but Ryan Zimmerman cut down the lead runner for out no.2 and Jordan Zimmermann popped Josh Thole up to end his fifth scoreless frame. An 18-pitch fifth had Zimmermann at 77 pitches after 5.0 scoreless innings. Chris Young hit Danny Espinosa with one down in the home-half of the fifth, but two quick outs later he was through a 12-pitch frame, at 70 pitches total, with five scoreless of his own on the board. 0-0 in Nats Park.

• First Double Since 2008: Tyler Moore got a glove on a line drive to left by Chris Young, but couldn't make the catch, so the opposing pitcher led off with his first double of the year (his first since 2008) and just the fourth hit of the night off Jordan Zimmermann. A 93 mph full-count four-seamer got a pop to foul territory in right from Ruben Tejada for out no.1. A 1-2 curve got a groundout to second from Daniel Murphy for out no.2, and a 1-1 fastball got a fly to right-center from David Wright that Bryce Harper tracked down to end a 21-pitch inning and Jordan Zimmermann's sixth scoreless frame. 95 pitches on the night. Still no score.

• Those Are The Red Porch Seats, Chris. Your Friend, Adam: Bryce Harper hit a weak chopper back up the middle with one down and easily beat the throw to first by Rubern Tejada. One out later Adam LaRoche stepped in and hit an opposite field blast to the Red Porch seats for his 16th HR of the year and a 2-0 Nats' lead.

• Insurance Runz: Tom Gorzelanny took over for Zimmermann in the seventh, and gave up just the fifth hit of the night by the Mets when Lucas Duda doubled to right-center with one down. One out later, Andres Torres battled Gorzelanny in a seven-pitch at bat before singling to right to cut the Nats' lead in half, but an alert Gorzelanny cut Michael Morse's throw in from right and got Torres trying to take second for the third out of the inning, preserving the Nationals' lead. 2-1 Nats after six and a half in D.C. Jesus Flores and Roger Bernadina hit back-to-back two-out singles off former Nats', current Mets' right-hander Miguel Batista in the home-half of the frame, literally off him in Bernadina's case, and Steve Lombardozzi's 13th double off 2012 brought them both in to make it 4-1 after seven in the nation's capital.

• Here I Go Again + Ready Or Not: Sean Burnett gave up double no. 14 of 2012 by Scott Hairston with one down in the Mets' eighth, but a swinging K by Ruben Tejada and a grounder to first from Daniel Murphy later the Nats' lefty was through a 15-pitch frame with the Nationals' 4-1 lead in tact. Jon Rauch threw a scoreless eighth, with only Adam LaRoche reaching on a swinging K/wild pitch. With the score 4-1, Tyler Clippard came out looking for a shot at redemption after last night's blown save, only to surrender a long fly ball to right by David Wright that just cleared the out-of-town scoreboard for a solo HR. 4-2 game after Wright's 12th HR of 2012 and his third hit in four at bats. Ike Davis K'd swinging for out no.1. ONE!!! Lucas Duda K'd swinging for out no.2, but Jason Bay launched a second solo blast, this one to left and off the fair/foul pole to make it a 4-3 game. Jordan Valdespin who hit a three-run blast last night in Clippard's first blown save since taking over as closer, K'd swinging to end it. That was too close. Nats win, 4-3 final. 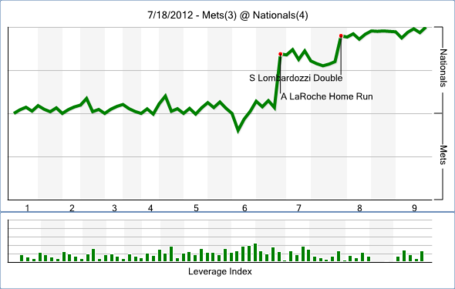