New York Mets Salvage One With 9-5 Win, Drop Two Of Three To Washington Nationals In D.C.

Share All sharing options for: New York Mets Salvage One With 9-5 Win, Drop Two Of Three To Washington Nationals In D.C.

• Wright vs Zim: 26-year-old Washington Nationals' left-hander Gio Gonzalez gave up one home run in his first 14 starts and 84.2 IP this season, then the Nats' no.2 went to Colorado for start no.15 of 2012 and gave up two home runs in six innings against the Rockies in Coors Field. The lefty surrendered another four-bagger in Atlanta the next time out, tripling the number he'd allowed in 84 innings-plus in 11.0 innings over consecutive starts. This afternoon in Nationals Park, Gonzalez gave up two home runs in his first two innings of work. David Wright hit a two-run blast in the first, after a slow roller and slow release on a grounder to Steve Lombardozzi put a runner on in front of New York's hard-hitting third baseman. Wright entered the game with a gaudy .351/.441/.568 line, 30 doubles and 12 HR's in 87 games and 379 PA's. HR no. 13 for Wright sailed out to left-center, over the 106.7 the FAN sign behind the visiting team's bullpen and into the first row of seats some 390ft from home to give the Mets a 2-0 lead on Gio and the Nats early.

Ryan Zimmerman cut NY's lead in half in the bottom of the first when he hit a two-out solo shot to pretty much the same spot Wright visited with his home run. THE KIDS CALL HIM ZIM!! THE KIDS CALL HIM ZIM!! The Nats' third baseman took a fastball for a strike from Mets' knuckler R.A. Dickey then crushed a 1-0 knuckleball that was up in the zone and over the middle. 2-1 after one.

"What makes him so tough is that he's throwing it over," Davey Johnson said, "So you're getting more knuckleballs because he's getting it over. When he's going to have a problem is when he doesn't get it over. He's been very consistent all year getting it over and he's used his fastball occasionally, but that's the key to beating a knuckleballer, him missing with it and having to come in with something other than a knuckle ball. And he throws a real hard one, it doesn't wobble as much but it wobbles enough to miss the bat. He's been real special."

• This Is Not The Gio Gonzalez We Were Looking For: It's even tougher to beat Dickey when you have to come back from a big deficit. The Mets, who hit two home runs off Nats' closer Tyler Clippard in the ninth inning of last night's game, kept swinging hot bats early this afternoon. Ike Davis hit the second home run in two innings off Gio Gonzalez in the top of the second, taking a 2-2 curve to deep center over Roger Bernadina and the 402 ft sign on Nationals Park's CF wall. HR no. 14 for Ike. 3-1 NY. It didn't get any easier for Gio Gonzalez. After R.A. Dickey set the Nats down in order on 11 pitches in the bottom of the second, the Mets loaded the bases with no outs in the third and got another run in on a DP grounder by Scott Hairston to make it 4-1. Ike Davis then hit a two-out RBI single to make it 5-1 New York. 61 pitches for Gio through three.

• Gio Hammered And Done: R.A. Dickey gave up one and two-out singles by Lombo and Zimmerman, respectively, in the Nats' third, but popped Adam LaRoche up to strand both runners. A leadoff walk started the Mets' fourth, and after Gio Gonzalez retired the opposing pitcher on a sac bunt he was lifted in favor of reliever Craig Stammen. Gio's line (w/ a runner on that belongs to him): 3.1 IP, 6 H, 5 R, 5 ER, 3 BB, 2 K's, 2 HR's, 68 P, 37 S, 4/2 GO/FO. Stammen gave up an RBI single in the first at bat of his afternoon, with Ruben Tejada singling the walk Gonzalez allowed in to make his line a little worse: 3.1 IP, 6 H, 6 R, 6 ER, 3 BB, 2 K's, 2 HR's, 68 P, 37 S, 4/2 GO/FO. Stammen then walked Andres Torres to put two runners on for David Wright and the Mets' third baseman's 14th HR of 2012 and second HR this afternoon was a three-run blast to center field that made it 9-1 NY after three and a half in the nation's capital.

• Moving Along: After Gio Gonzalez and Craig Stammen threw a combined 31 pitches in the top of the fourth, R.A. Dickey came back out and threw a quick, 10-pitch, 1-2-3 frame to finish four innings of work at 55 pitches overall. Craig Stammen pitched around a single by Justin Turner and a double to right by Josh Thole to complete the first scoreless inning of the day for Nationals' pitchers in the fifth. R.A. Dickey needed 14 pitches to retire the Nationals in the bottom of the inning, letting the opposing pitcher reach on a throwing error but popping Steve Lombardozzi and Bryce Harper up to complete a 16-pitch frame. Still 9-1 Mets.

• DeRo Double: Mark DeRosa doubled for the fourth time this season in the Nationals' sixth, took third on a groundout and scored on a Michael Morse sac fly to right that made it a 9-2 game. A two-out Justin Turner double in the top of the seventh ended Craig Stammen's day after 3.1 IP, 5 H, 3 R, 3 ER, 1 BB, 2 K's, 1 HR, 62 pithches, 38 strikes, 4/1 GO/FO. Henry Rodriguez recorded the final out of the frame for the second-straight scoreless inning for the Nats' pitchers and Sandy Leon (on his first MLB hit) and Tyler Moore started the Nationals' seventh with back-to-back singles. R.A. Dickey struck Steve Lombardozzi out on four pitches, collecting his 5th K today and his 132nd of 2012, then threw home on a swinging bunt by Bryce Harper to get Leon on a play at the plate for out no.2 before Mark DeRosa flew to left to end the threat. 9-2 NY after seven.

• Comeback?: Henry Rodriguez needed just 10 pitches to retire the Mets in order in the eighth as Drew Storen warmed up for his 2012 debut in the Nationals' bullpen. Ian Desmond, who was out of the lineup again today, got a pinch hit AB in the bottom of the eighth, and singled to center on a 1-1 pitch from Dickey. Michael Morse took a 2-2 knuckler to the right-center gap and all the way to the wall to score Desmond from first and make it 9-3 with his 8th double of 2012 and the Nats' 10 hit off R.A. Dickey today. Dickey's done. 7.1 IP, 10 H, 3 R, 3 ER, 1 BB, 5 K's, 111 P, 76 S, 8/8 GO/FO. Up 9-3. Tim Byrdak took over on the mound for NY. Michael Morse moved to third on a two-out grounder to third by Sandy Leon, then scored when David Wright made a nice backhand play, but bounced a throw to first Ike Davis couldn't handle. 9-4 game in the nation's capital. Josh Edgin took over for Byrdak, and gave up a base-loading infield single by Steve Lombardozzi. Bryce Harper stepped in with the bases loaded, but flew to right to end the threat and the eighth.

• STOREN WARNING!!!: Drew Storen took over on the mound in the top of the ninth, returning to the majors after elbow surgery this Spring. A 93 mph fastball to David Wright got Storen his first major league out of the year on a grounder to third. Kirk Nieuwenhuis grounded to short on a 92 mph 1-2 sinker. Grounder. Desmond. Out. Two down And Jason Bay flew out to Roger Bernadina in center to end a 9-pitch, 1-2-3 inning for Storen. Mets' closer Bobby Parnell gave up a leadoff single by Mark DeRosa to start the Nats' ninth. Ian Desmond took one off the arm to put two runners on for Michael Morse. Morse flew to right on a first-pitch curve for out no.1. Danny Espinosa K'd looking. Roger Bernadina? Groundou... no! Shark beat the throw to first. RBI single. 9-5 game. Sandy Leon K'd swinging to end it. 9-5 Mets. Nats take two of three.

• Miss The Game? The D.C. Faithful Watched For As Long As They Could Take It... 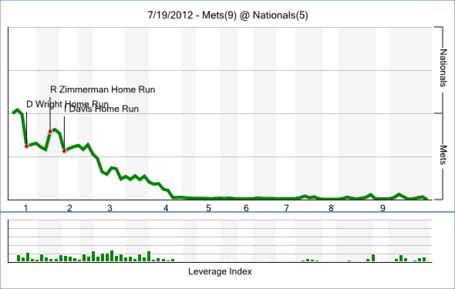