• Davey Says, Establish That Fastball: Stephen Strasburg missed inside with three of the first four mid-90's fastballs he threw to Atlanta's leadoff man Michael Bourn, but he jammed the Braves' outfielder with a 3-1 pitch and got a groundout to second for the first out of tonight's game. Lack of control, but success, the theme of Strasburg's 19th start was established early. Jason Heyward took a 97 mph four-seamer back through the middle of the infield for a two-out single off the Nats' just-turned-24-year-old right-hander, but the Nationals' '09 no.1 overall pick got the Braves' 1990 no.1 overall pick Chipper Jones swinging with a 1-2 change on the second of two offspeed pitches he threw in a 16-pitch inning. Mix of two and four seamers before that. 0-0 after a half.

Ryan Zimmerman walked with two down in the first in a seven-pitch at bat with right-hander Tommy Hanson, and the Braves' 25-year-old right-hander gave up a two-out double by Adam LaRoche in the next AB, setting Michael Morse up with two runners on so that the 0-1 four-seamer Hanson served up was good for three runs when it went out to center and into the back rows of the Red Porch seats. 3-0 Nats' lead. Morse's 5th followed LaRoche's 22nd double of 2012. Thunder. Davey Johnson likes his middle of the lineup thunder. Ian Desmond walked with two down and stole second, Danny Espinosa hit a backspin pop that just got by Hanson before it died in the infield grass halfway to third. 2 on, 2 out, but Jesus Flores K'd swinging to strand both runners. The Nats made Hanson throw 34 pitches in the first, however...

• And just how far did Morse's HR go into the Red Porch seats?

• Moore Wants Faster Feet: Bryce Harper went a long way to left-center to make a diving attempt on a gapper off Freddie Freeman's bat, but couldn't make the catch. The Braves' first baseman matched Nats' first baseman Adam LaRoche's 22 doubles in 2012. Dan Uggla took a one-out walk from the Nats' starter, but Paul Janish K'd swinging at a 98 mph fastball outside and Tommy Hanson got a cruel 1-2 curve from Strasburg that got the opposing pitcher swinging for out no. 3 and K no.3 in 2.0 scoreless innings pitched. A 22-pitch second has Stras at 38 total after two. Tommy Hanson needed just nine pitches to retire the Nationals in order in a quick 1-2-3 second, after which he was down 3-0 at 43 pitches overall.

• Leadoff Walks, Pfft: Strasburg walked Braves' leadoff man Michael Bourn on five pitches in the first at bat of the third. The Nats' starter popped Martin Prado up for out no.1. A full-count curve to Jason Heyward missed outside and the second walk of the inning and third of the night put two on with Chipper Jones due up. After K'ing swinging at a change in his first at bat, the Braves' 40-year-old, 19-year veteran sent a grounder to short for out no.2, leaving it up to Freddie Freeman to do something with the two runners Strasburg put on, but Atlanta's 22-year-old first baseman grounded out to second to end a 21-pitch inning with Stras at 59 overall. Michael Morse hit a two-out one-hopper by a surprised Chipper Jones at third for a two-out single in the Nats' half of the third and Ian Desmond walked for the second time in two at bats, but Danny Espinosa flew to center to end a 23-pitch inning by the Braves' starter.

• TKCHZ!!!: Brian McCann took a 2-0 two-seamer to right-center for his 11th double of 2012 in the top of the fourth. The slow-footed catcher took second on a weak pop to right by Dan Uggla, showing disdain for Michael Morse's arm in right field. Paul Janish K'd swinging at a 95 mph 1-2 fastball for out no.2 (and K no.4 for Strasburg) and the Nats' starter popped the opposing pitcher up to end his fourth scoreless inning in Nationals Park. A 12-pitch frame had Strasburg at 71 overall, 38 strikes. Steve Lombardozzi extended his hit streak to 13 games wit a two-out infield single and Bryce Harper walked in the next at bat to bring Ryan Zimmerman to the plate with two on and two out and the Nats' 3B worked the count full before crushing the eighth pitch of the bat from Tommy Hanson. THE KIDS CALL HIM ZIM!! THE KIDS CALL HIM ZIM!!! A 90 mph four-seamer from Hanson sails out to deep left and the Nationals take a 6-0 lead. HR no. 12 of 2012 for Zim.

• Rain, Stras Don't Mind: With rain picking up in Nationals Park, Stephen Strasburg retired the first two Braves he faced before surrendering a two-out single to right by Jason Heyward. Chipper Jones ripped a low one-hopper to second with two down, but Danny Espinosa snagged it and threw to first to end Atlanta's fifth and make it official. 6-0 Nats after four and a half. A 14-pitch inning has Strasburg at 85 overall. Back-to-back singles to start the Nats' fifth by Michael Morse and Ian Desmond ended Tommy Hanson's outing after 4.0 IP, 8 H, 6 R, 6 ER, 4 BB, 5 K's, 2 HR's and 96 pitches, 60 of them strikes. Braves' lefty Luis Avilan took over on the mound and retired Danny Espinosa on a line drive to right, but a walk to Jesus Flores loaded the bases and another base on balls to Stephen Strasburg forced in a run to make it a 7-0 game. A one-out single by Steve Lombardozzi drove two more in and it was 9-0 Nationals after five innings in D.C.

• One Too Many Tonight: Stephen Strasburg started the sixth at 85 pitches overall in 5.0 shutout innings. Five pitches into the Braves' sixth, the Nats' right-hander surrendered a two-run HR to right and over the out-of-town scoreboard. Freddie Freeman hit a leadoff single and Brian McCann crushed a 1-1 change to get the Braves on the board at 9-2 in the fifth. Dan Uggla singled with one down and took third on a long fly ball to center by Eric Hinske that bounced off the top of the CF wall, just inches above the GEICO sign but not out. Strasburg was done. 105 pitches overall, 2 on, 1 out. Michael Gonzalez took over and struck Michael Bourn out for out no.2. Martin Prado worked the count full and doubled to left on a slider from Gonzalez, making it 9-4 and officially ending Strasburg's night:

• DP's All Around: Cristhian Martinez gave up back-to-back singles by Zimmerman (2 for 3, 3 RBI's) and Adam LaRoche (2 for 4), but Michael Morse grounded into a 6-4-3 DP and Ian Desmond K'd looking to end the bottom of the sixth. Michael Gonzalez came back out for the seventh and gave up a leadoff walk to Chipper Jones, but a DP grounder off Freddie Freeman's bat and a backwards K by Brian McCann ended the top of the seventh. Sandy Leon and Steve Lombardozzi (3 for 5) hit one and two-out singles, respectively, to put runners on the corners in front of Bryce Harper in the bottom of the seventh, but the right fielder K'd swinging to end the Nationals' half of the frame.

• Braves Threaten: Drew Storen came out for the second-straight game in the eighth. Dan Uggla punched a bloop single to left to start the inning. A five-pitch walk to Paul Janish ended a quick outing for Storen. Sean Burnett came on and struck pinch hitter Juan Francisco out with a full-count sinker. Michael Bourn K'd swinging at a 1-2 slider for out no.2, but Burnett gave Martin Prado a two-out walk then got behind 3-0 on Jason Heyward before issuing the second-straight free pass, forcing in a run to make it 9-5 Nats. Chipper Jones took a 2-2 slider to left to drive in two more runs and make it a 9-7 game. Freddie Freeman lined to right in the next at bat to bring Heyward in and make it 9-8 and there were runners on first and second for Brian McCann, who rolled out to first to end the Braves' eighth. 31 pitches by Burnett. A 9-0 lead turns into a 9-8 nail-biter.

• Clipp'd?: Kris Medlen got Ryan Zimmerman looking for out no.1, got help from Freddie Freeman on a sharp grounder to first by Adam LaRoche for out no.2 of the Nats' eighth and got Michael Morse to chase for a swinging strike three and the end of the eighth inning. Tyler Clippard came out looking for save no. 16 of 2012. Dan Uggla got up 3-1 and walked on a high fastball. A slider in the dirt got by Jhonatan Solano, allowing Uggla to take second and then Clippard hit Paul Janish to put two on with no outs. David Ross took a 3-1 pitch that looked like ball four, then K'd swinging at a fastball up in the zone for out no.1. Michael Bourn... tripled off the out-of-town scoreboard, driving in two runs and completing the comeback. 10-9 Braves after eight and a half. Craig Kimbrel came on in the ninth looking for save no. 29. Ian Desmond... K'd swinging. 1 out. Danny Espinosa... took a 1-0 fastball to left-center and... into the visitor's bullpen!! HR!! HR!! "Left Side" Danny does it!! Opposite field SOLO HR!! 10-10 game after nine innings in the nation's capital.

• Free Baseball: Tom Gorzelanny needed eight pitches to retire the Braves in order in the top of the tenth. Braves' lefty Eric O'Flaherty took over on the hill for Atlanta. Tyler Moore grounded out to third. Bryce Harper flew to left and with two down... Ryan Zimmerman reached safely on a sharp grounder to third in spite of a diving play and throw to first by Chipper Jones, but Adam LaRoche grounded off O'Flaherty and out to second. 3 outs. On to the 12th. Still 10-10. Ryan Zimmerman made a play on a grounder toward short by Dan Uggla, and a wild throw went by first base to give Uggla second. A wild pitch/passed ball allowed the Braves' infielder to take third with no one out and a Paul Janish pop to short-center fell in for an RBI hit. 11-10 Atlanta. If Desmond caught it it was a double play because Uggla just ran home. Tyler Pastornicky bunted Janish over. After a HBP on Bourn, a fly to right by Martin Prado moved Janish to third with two down, but Jason Heyward lined to short to end the top of the frame. 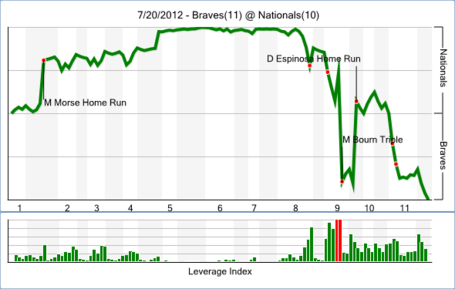