• Get To E-Jax Early, Atlanta: Edwin Jackson has been a slow starter so far this year. In his first year in Washington, the veteran of 10 major league seasons has a 9.00 ERA in the first inning over his first seventeen outings, in which the 28-year-old right-hander has allowed the opposition to put up a .338/.442/.648 line with 24 hits, 17 runs, four doubles, three triples, four home runs and 11 walks allowed. This afternoon in the nation's capital, E-Jax struck the first two batters he faced out, getting both Michael Bourn and Martin Prado with biting 2-2 sliders. A four-pitch walk to Jason Heyward gave Atlanta its first baserunner of the game, but a line drive to Bryce Harper in center off Freddie Freeman's bat ended a 19-pitch, scoreless first for the Washington Nationals' right-hander. After back-to-back two-out singles by Ryan Zimmerman and Michael Morse in the bottom of the first, Adam LaRoche K'd swinging at a full-count fastball on the 19th pitch of the inning from the Braves' Ben Sheets.

• McCann Can: Two pitches into the second, the Braves had a 1-0 lead after catcher Brian McCann hit his 16th HR out to right on an 0-1 fastball from Edwin Jackson that ended up in the first rows above the out-of-town scoreboard. After going 2 for 6 yesterday, McCann had a 10-game hit streak going, over which he was 14 for 40 (.350/.386/.825) with a double and six HR's. So far in this series, he's now 3 for 7 with a double and two home runs. Dan Uggla K'd swinging for out no.1 of the second, leaving him 0 for 11 career vs E-Jax with 4 K's in 11 PA's. Ian Desmond showed off his range going back to make an over-the-shoulder catch for out no.2 and Paul Janish K'd swinging to end a 16-pitch second by the Nats' right-hander.

• +Range, +Bat, +Speed, +Arm: Ian Desmond lined an 0-1 fastball to right to start the Nats' second, then stole his 15th base of the year one out later with Jesus Flores at the plate, but Flores and E-Jax both flew out to end a 16-pitch second by the Braves' Sheets. ATL LF Martin Prado lined to center for two-out single off Edwin Jackson in the third, but the Nationals' starter got Jason Heyward to chase a 2-2 fastball upstairs for check-swing strike three and a scoreless top of the inning. Roger Bernadina, who took over for Bryce Harper after the Nats' 19-year-old outfielder fouled a bunt attempt off his foot and later lifted himself from the game, bunted his way on with one out then stole his 10th base of 2012, before taking third on a throwing error by the Braves' Brian McCann. Ryan Zimmerman walked to put runners on the corners, but Michael Morse hit into an inning-ending 6-4-3 to strand the Shark at third and end Ben Sheets' third scoreless.

• E-Jax pwns Uggla: Edwin Jackson put Brian McCann on in front of Dan Uggla in the top of the fourth, but the Braves' second baseman, who entered the game 0 for 10 career with 3 K's vs E-Jax was 0 for 2 with 2 K's today and 0 for 12 with 5 K's overall vs Jackson after the Nationals' starter got him swinging with a full-count fastball for out no.2 and K no. 6 for the Nats' right-hander. Juan Francisco was victim no. 7 for Jackson, who got the Braves' 3B swinging to end a 21-pitch inning by the Nats' RHP. Adam LaRoche walked on five pitches to start the Nats' fourth, but two pitches, a fly to center by Desmond and a DP grounder by Danny Espinosa later the Braves' Ben Sheets was through four scoreless after a seven-pitch frame.

• [CHOMP!]: Some strong defense and a friendly call helped E-Jax out in the Braves' fifth. Paul Janish singled to start the inning, but Ben Sheets popped a bunt attempt up toward first and Adam LaRoche made a spectacular diving catch for the first out of the inning. Janish then tried to go first-to-third on a sharp grounder to center by Michael Bourn, but Nats' CF Roger Bernadina came up throwing and nailed Janish at third (though the replay showed he might have been safe.) Nice call, Tom Hallion. With one on and two out instead of runners on first and third, Edwin Jackson got a groundout to short from Martin Prado to end a nine-pitch top of the fifth. Ben Sheets needed just 12 pitches to retire the Nats in order in the bottom of the inning. Still 1-0 Braves.

• E-Jax Rolling, Trailing: Edwin Jackson collected his 8th K in a 14-pitch, 1-2-3 6th that had the Nats' right-hander at 93 pitches overall, down 1-0 after five and a half. Roger Bernadina singled to start the Nationals' half of the sixth then one out later Michael Morse walked to put two on for LaRoche, but the Nats' 1B K'd swinging for the second time today (0 for 2, BB), leaving it up to Ian Desmond, who flew out to center to end Sheets' sixth scoreless. 91 pitches overall for Sheets. 0 for 7 with RISP for the Nats today. E-Jax got Dan Uggla swinging for the first out of the seventh and the Nats' starter's 9th K today. (Update: Uggla now 0 for 13 w/ 6 K's vs Jackson in his career). Juan Francisco singled with one down for the Braves' fifth hit of the game. A wildpitch with Paul Janish up gave Francisco second. A sac fly from Janish let Francisco take third, but a weak grounder to first from Eric Hinske ended an 18-pitch inning after which E-Jax was up to 111 pitches overall and done for the day.

• Blame Your Back, Jesus: Danny Espinosa singled off Kris Medlen to start the Nats' seventh, but he was doubled up at first when Jesus Flores popped a bunt attempt up to the Braves' pitcher and Espinosa couldn't get back. Two quick outs for Atlanta's right-hander and a Tyler Moore groundout ends an eight-pitch inning. 1-0 Braves after seven. Moore hit for E-Jax, so the Nats' starter's done:

• Oh, Henry: Henry "Lightning" Rodriguez gave up a leadoff single by Michael Bourn, then let him steal second with Martin Prado at the plate. After a walk to Prado, a double steal put both runners in scoring position and a wild pitch by Rodriguez allowed Bourn to score and make it 2-0 Braves. With the count 2-1 to Heyward, Davey Johnson lifted H-Rod in favor of Ryan Mattheus. The Nats' new right-hander walked Jason Heyward to put runners on the corners with no one out, but Adam LaRoche fielded a sharp grounder and threw home to get Prado in a rundown for a 3-2-5 double play. Mattheus then got Dan Uggla swinging to limit the damage and fit the Braves' second baseman for a golden sombrero. 0 for 4, 4 K's, still 4-0 Atlanta. Kris Medlen came back out and retired the Nats in order in the eighth to preserve the Braves' 2-0 lead.

• LARRRRRRR-YYYYYY: Ryan Mattheus gave up a leadoff single by Juan Francisco, then one-out later threw a first-pitch fastball to Chopper Jones, who hit the 93 mph heater so far it bounced off the upper deck above the Nats' bullpen for a two-run HR and a 4-0 Braves' lead. Chipper Jones' 9th HR of 2012. A two-out single by Martin Prado ended Mattheus' day. Michael Gonzalez got a groundout from Heyward to end the Braves' ninth. Chad Durbin came out to end it for Atlanta. Michael Morse flew out to right. Adam LaRoche K'd looking. Ian Desmond grounded to short. Ballgame. Braves win, 4-0 final. Doubleheader part two coming up at 7:00 pm EDT. 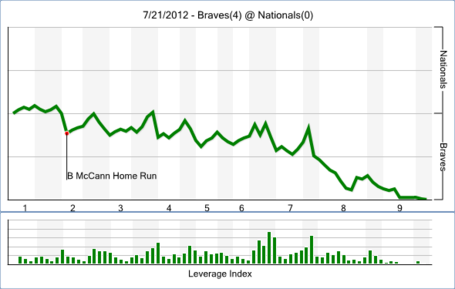