Share All sharing options for: Washington Nationals Get Strong Start From John Lannan, Come Back To Beat Atlanta Braves, 5-2.

• Welcome Back, John: The first pitch of the first start in the majors this year by Washington Nationals' '05 11th Round pick John Lannan was bunted by the big left-hander toward first and into no-man's land in the infield grass for a leadoff single by Atlanta Braves' outfielder Michael Bourn. Welcome back, John. Now into the stretch. A 1-1 two-seamer to Martin Prado resulted in a ground ball back up the middle to where Ian Desmond was waiting behind second. The Nats' SS stepped on the bag and threw to first for a quick 6-3 DP and the first two outs of the frame. Lannan issued a two-out walk to Jason Heyward in the next at bat, then gave up an RBI double to the right-center gap by Chipper Jones that brought the walk around and put the Braves up 1-0 early in Nationals Park. After doubling for the 12th time this season, Jones, who homered in a PH appearance in his one at bat this afternoon, scored on an RBI single by Freddie Freeman and it was 2-0 Atlanta after a half an inning in the nation's capital. 22 pitches, three hits, two walks, two earned runs allowed in the first inning of the year in the majors for the 27-year-old Lannan.

• 6 Up, 6 Down: ATL right-hander Randall Delgado needed 14 pitches to retire the Nats' in order in the bottom of the first. Two pitches into the second, Lannan had allowed his fourth hit, a line drive double to left by Paul Janish. The Braves' shortstop took third on a successful sac bunt by Delgado, but the Nats' left-hander stranded him there when he got Jason Heyward swinging and got a sharp groundout to third by Martin Prado to end a 13-pitch frame. 2-0 after Atlanta after one and a half. Randall Delgado gave up a few hard-hit fouls, but no hits in a 16-pitch second after which he'd retired six-straight to start the game.

• Long Ball Lannan: A two-out grounder by Freddie Freeman got through the right side after Lannan had retired the first two Braves in the third. A 1-2 fastball inside hit Dan Uggla in the leg, putting two on with two out, but a broken bat pop to left by David Ross ended an 18-pitch inning by Lannan. With two down in the bottom of the inning, the Nats' starter took a 1-1 fastball to left for an opposite field single and the Nationals' first hit off Randall Delgado, but Steve Lombardozzi was punched out on a letter-high called strike three that ended the Braves' starter's third scoreless frame.

• Ground. Ball. Outs: 14-pitch fourth for John Lannan, who gets two more groundouts for seven total ground ball outs and 65 pitches overall. Roger Bernadina [CHOMP!] lined to right for a leadoff single and the Nats' second hit off Randall Delgado to start the bottom of the inning. Bernadina took second when Ryan Zimmerman singled up the middle for the second-straight hit. Michael Morse K'd swinging for out no.1 on a curve he had no business chasing. Adam LaRoche stepped in next and sent a grounder to second to start a 4-6-3 inning-ending and potential-rally-killing DP. 2-0 Braves after four.

• Sorry, Larry: John Lannan hit Chipper Jones in his elbow to put the 40-year-old veteran on with two down in the top of the fifth, but the Nats' lefty popped Freddie Freeman up to left to end a 13-pitch frame. 78 pitches through five. Danny Espinosa walked with one down in the Nationals' fifth and took second on a single through the right side by Sandy Leon allowing Lannan to bunt both runners over and get Steve Lombardozzi up with two runners in scoring position. A wild pitch by Delgado followed that allowed the Nats' first run to score when Espinosa charged home from third to make it a 2-1 game after five in the nation's capital.

• Shark Pt. 1: John Lannan got three more ground ball outs in a seven-pitch, 1-2-3 sixth against the Braves that had him up to 85 pitches overall after 6.0 IP in which the Nats' left-hander induced 11 ground ball outs. Still 2-1 Atlanta, however, but Roger "The Shark" Bernadina singled to start the sixth with his second hit in three AB's. Bernadina was running when Ryan Zimmerman grounded to second, and Atlanta's Dan Uggla bobbled the ball allowing the Shark to reach safely and Zim dove into first to avoid Freddie Freeman's tag after Uggla tried to at least get one. A HBP On Morse loaded the bases with no outs, but a 1-2 change from Delgado got Adam LaRoche swinging for out no.1. An Ian Desmond grounder to first brought Bernadina in to tie it. 2-2 game after six when Danny Espinosa K's swinging to end the frame.

• Shark Pt. 2: John Lannan needed 13 pitches to retire the Braves in order in the top of the seventh, striking out two and getting a grounder to short to end his night at 95 pitches overall, having retired 9 of the last 10 and 13 of 14 after he hit Dan Uggla with two out in the third. Only the HBP on Chipper Jones resulted in a Braves' runner being on after the top of the third. 7.0 IP, 5 H, 2 R, 2 ER, 2 BB, 3 K's, 2 HBP, 98 P, 65 S, 12/4 GO/FO for Lannan in start no.1 of 2012. Sandy Leon bounced a grounder off the first base bag for a leadoff single off Atlanta reliever Cristhian Martinez in the Nats' seventh, but a sac bunt and pop up by Lombardozzi later he was standing at second with two down when Roger Bernadina stepped in and singled for the third time today, bringing Leon around for the go-ahead run. 3-2 Nats over the Braves after seven.

• Bryce [Expletive Deleted] Harper: Sean Burnett needed 20 pitches to retire the Braves in order in the top of the eighth. Braves' right-hander Cristhian Martinez retired the first two batters in the eighth. Bryce Harper stepped in to a nice ovation from the D.C. Faithful after he'd injured his ankle on a bunt attempt in the afternoon game and he hit a two-out single to left to keep the bottom of the inning going long enough for him to steal second with Danny Espinosa up. A two-out single to left scored Harper from second and the Nats took a 4-2 lead. After a wild pitch moved Danny Espinosa to second, Sandy Leon got hit by a pitch to put runners on the corners with two down and Braves' SS Paul Janish bobbled a grounder to short to let an unearned run in. 5-2 Nationals after nine.

• Clipp'd: Nats' closer Tyler Clippard came on in the 9th looking for save no.16 of 2012. Dan Uggla popped up to Adam LaRoche for out no.1. ONE!!! David Ross took a one-out walk. Eric Hinske popped to center for out no.2. TWO!! Brian McCann took a 1-2 pitch outside but K'd swinging through a 2-2 heater. John Lannan gets the win. Tyler Clippard gets the save. And the Nationals take one from the Braves setting themselves up for a chance at a series split tomorrow. 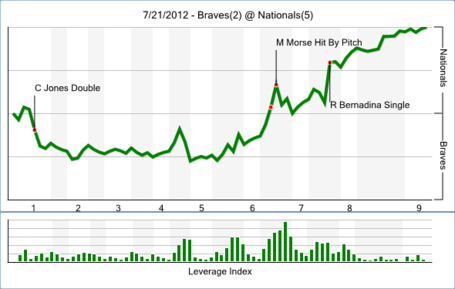