• Davey On Jordan And A Harper HR: "I don't mind if it's a well-kept secret," Davey Johnson told reporters last week when asked about how Washington Nationals' right-hander Jordan Zimmermann continued to excel but stay under the radar in the Nats' rotation. "He's a heck of a pitcher," the Nats' 69-year-old skipper said after the 26-year-old '07 2nd Round pick had completed six scoreless innings against the same New York Mets he faces tonight in Citi Field. Zimmermann's six scoreless innings that night in Nationals' Park continued a streak of 17.0 scoreless innings on the mound for the Nationals' starter, who hasn't given up a run since the second inning of a July 8th outing against the Colorado Rockies. "[Zimmermann's] a man out there," Johnson said, "No doubt about it. He has a great presence, knows what he wants to do. There's no muss, no fuss. It's, 'Here. Hit it.' And he goes right after them."

Zimmermann took the mound tonight for his 20th start of 2012 with a 2-0 lead after Steve Lombardozzi got on with an infield single in front of Bryce Harper, who hit a full-count fastball from Mets' starter Chris Young out to right, over the XEROX sign on the wall and into the visitor's bullpen under the Dunkin' Donuts banner ad. 2-0 Nationals after a half on Harper's ninth. A home run in his first AB in NY, the Nats on Twitter note, and Harper's first long ball in 81 AB's...

• Hankook Tires Second Inning: Jordan Zimmermann gave up a leadoff single by Mets' shortstop Ruben Tejada, then erased the runner with the help of his infielders as Danny Espinosa, Lombardozzi and Adam LaRoche turned a 6-4-3 DP. Four pitches later and a soft pop to second from David Wright and Zimmermann was through a 12-pitch top of the first and his 18th-straight scoreless frame. Chris Young threw 34 pitches in a long top of the first, giving up three hits and two runs on Harper's HR. The veteran right-hander needed just 12 pitches to retire the Nats in order in the top of the second. Ike Davis K'd swinging at a 3-2 curve in a 10-pitch AB in the home half of the frame. 10 pitches later Jordan Zimmermann had 2.0 scoreless and two K's when Jason Bay went down swinging to end the second.

• 20.0 Scoreless Brought To You By √erizon!: Bryce Harper walked to start the third and stole second, 13th SB of 2012, but the Nats' 19-year-old rookie was stranded there by Chris Young, who completed a 16-pitch inning at 62 pitches on the night. Jordan Zimmermann got the opposing pitcher looking with a 1-2 heater outside to end a 14-pitch, 1-2-3 third, after which the Nats' starter was at 46 pitches with 20.0 scoreless innings overall. The Nats went down in order in a seven-pitch top of the fourth. Zimmermann was right back up on the mound in the Mets' half of the frame...

• Streak's End, Presented by PartyCity.com: Ruben Tejada singled for the New York Mets' second hit off Jordan Zimmermann in the bottom of the fourth. Just like the first time, however, the Nats' right-hander erased the runner with a groundball to second and 4-6-3 DP. David Wright got hold of a 94 mph 1-2 fastball though and the Mets' slugger launched a two-out solo blast over the √erizon sign on the left field wall and into the PartyCity.com Deck. 2-1 game on Wright's 15th HR of 2012. Zimmermann's scoreless inning streak ends at 20.0 IP, but he still has a one-run lead after four innings in Citi Field.

• The W.B. Mason 5th: Chris Young threw a 1-2-3 5th, retiring the ninth-straight National going back to Bryce Harper's leadoff walk in the third. 79 pitches overall for Young after a 10-pitch inning. Jordan Zimmermann started the fifth at 59 pitches total after a 13-pitch frame in the fourth. Both Daniel Murphy and Jason Bay made contact with pitches from Zimmermann, but they flew out to left and right, respectively, for the first two outs of the fifth and a groundout to short by Kirk Nieuwenhuis gave the Nats' right-hander a 10-pitch, 1-2-3 frame. 69 pitches through 5.0 IP. Chris Young set the Nats down in order in the top of the sixth, retiring the 12th-straight National and the 16th of 17 batters overall going back to the final out of the first.

• Mercedes Benz Says: Zim. Can. Pick It.: Mets' C Josh Thole reached on an infield single to start the bottom of the sixth with the Mets' fourth hit of the game. Chris Young fouled two bunt attempts off to go down 0-2 quickly in the next at bat and the pitcher K'd trying to bunt the two-strike pitch for the first out of the inning. Ruben Tejada popped out for out no.2 and Ryan Zimmerman did his thing on a swinging bunt by Ruben Tejada, charging, barehanding and sidearming a throw to first for the third and final out of the Mets' sixth. Tyler Moore hit for Jordan Zimmermann in the top of the seventh, striking out with two down after a Sandy Leon walk had broken Chris Young's streak of retired batters at 14 overall.

• Pitching Change Brought To You By WISE Chips: Drew Storen started the bottom of the seventh by popping David Wright up, and by popping I mean, retiring the hot-hitting Mets' slugger on a fly out to the track in center field. Nats' skipper Davey Johnson took the ball from Storen after one out [and two pitches], turning to left-handed reliever Michael Gonzalez with Mets' left-hander Ike Davis due up. The first pitch Gonzalez threw got lined out to right and just over the wall for Davis' 15th HR and a 2-2 game after seven innings in Citi Field.

• XEROX 8th: Mets' lefty Josh Edgin retired the first two batters in the eighth. Mets' skipper Terry Collins turned to Jon Rauch with Ryan Zimmerman due up third in the top of the frame and the towering right-handed reliever retired the Nats' third baseman (and Rauch's former teammate) on a fly to right that ended Nats' eighth. Mike Gonzalez threw a fastball by Josh Thole for the first out of New York's eighth. Ryan Mattheus replaced Gonzalez and retired the first batter he faced, but gave up a two-out infield single by Ruben Tejada. 3rd hit for the Mets' SS. Jordany Valdespin rolled the third out to short, however, and Danny Espinosa tossed to Lombo covering for the inning-ending force. Still 2-2 in NY.

• TACO BELL 9th: Mets' right-hander Bobby Parnell gave up a one-out single by Adam LaRoche, who rolled one into the shift and beat it out as the Mets rolled around the wet grass in short right. Danny Espinosa came up next and rolled into an inning-ending 4-6-3 on the rain-soaked infield. 2-2 game after eight and a half. Ryan Mattheus retired David Wright to start the ninth. Tom Gorzelanny came on to face Ike Davis and struck him out. Daniel Murphy lined to right with two down and beat Bryce Harper's throw to second for a double. Jason Bay, who was hitless in his three previous AB's, grounded out to third for out no.3 after a nice play by Zim.

• Free Baseball Brought To You By GEICO: Roger Bernadina singled to left to start the Nationals' 10th. Bernadina went hard into second spikes high on a grounder to by Sandy Leon. The Shark took Mets' shortstop Ruben Tejada out on the play and jarred the ball loose putting two on with no one out. Tim Byrdak was lifted in favor of Mets' right-hander Pedro Beato with Mark DeRosa due up. DeRosa bunted too hard back to the mound, allowing Beato to cut Bernadina down at third. One out. Steve Lombardozzi lined to center to load the bases with one down and Bryce Harper, who hit a two-run HR in the first, came through with an RBI line drive to right to make it a 3-2 game in Citi Field. Ryan Zimmerman cleared the bases with a 3-run double that made it 6-2 and Michael Morse brought Zim around with a HR to right to make it 8-2 Nationals in the 10th. Zim's 20th double, Morse's 6th HR of 2012.

• Modells' 10th: Tom Gorzelanny came back out for the tenth and issued a leadoff walk to Andres Torres, but Ronny Cedeno grounded into a 4-6-3 DP. Two down. Justin Turner flew to left and the Nats won. 8-2 final. Harper with a big game. 56 wins on the year. 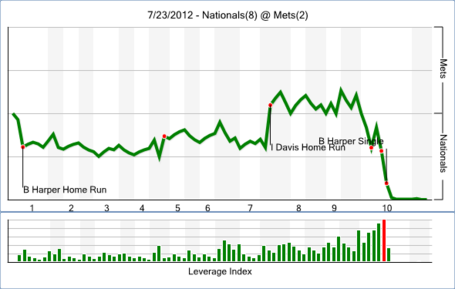 (H/t to NatsPR on teh tweeters for the title.)