• Gio vs New York: The Mets knocked Gio Gonzalez around and knocked him out after 3.1 IP last week in Nationals Park in a start in which the Nats' left-hander surrendered six hits, three walks and six runs to Washington's NL East rivals from New York. In his second career start in Citi Field tonight, Gonzalez took the mound after a scoreless, 14-pitch top of the inning in which Mets' right-hander R.A. Dickey gave up a two-out single by Ryan Zimmerman but nothing else. Washington's left-handed starter needed just six pitches to retire New York's first three batters in order, getting groundouts from Andres Torres, Daniel Murphy and David Wright in a 6-pitch, 1-2-3 bottom of the first. Adam LaRoche walked to start the second, but the Mets' 37-year-old knuckleballer set the next three Nationals down to complete a 17-pitch frame. 0-0 in NY after one and a half.

• E6 = 1-0: A high throw from deep in the hole at short put the leadoff runner on in the Mets' second. Scott Hairston reached safely on a throwing error by Danny Espinosa that pulled Adam LaRoche off the bag. Two outs later, after Hairston had stolen second, a single to right by Ronny Cedeno brought him around to give New York a 1-0 lead. Gonzalez threw 21 pitches in the bottom second of the inning...

• Harper Hates Knuckler: Bryce Harper battled R.A. Dickey for eight pitches before striking out on an 87 mph 2-2 knuckler, leaving him 0 for 2 with two K's tonight and 0 for 9 with 5 K's overall against the veteran right-hander this year. Dickey needed 14 pitches to get through the top of the third. Gio Gonzalez retired the Mets' batters in order in six pitches in the bottom of the inning. Still 1-0 New York.

• Zim pwns Knuckler: Ryan Zimmerman, who singled in his first at bat, doubled the second time up, going to right for a leadoff, opposite field ground-rule double that bounced into the stands in foul territory in right. A one-out single by Adam LaRoche moved Zimmerman to third and a two-out double by Danny Espinosa brought Zimmerman around to tie it at 1-1 after three and a half in New York. Zimmerman's 21st double. Espinosa's 25th. 1-1 game. Gio Gonzalez threw a five-pitch, 1-2-3 bottom of the fourth vs the Mets' Daniel Murphy, David Wright and Scott Hairston to finish four innings at 39 pitches overall, 27 of them strikes.

• Gio = Mad Efficient: A 13-pitch 5th had R.A. Dickey at 70 pitches overall after 5.0 innings in Citi Field. A 13-pitch, 1-2-3 5th by Gio Gonzalez had the Nats' lefty at 39 pitches overall. Bryce Harper K'd swinging in the top of the sixth for the third time tonight and the sixth time in 10 career at bats against the Mets' knuckleballer in Harper's rookie campaign. Dickey gave up a two-out single by Michael Morse then gave up a two-out, two-run home run by Adam LaRoche that sailed into the second deck in right and five rows back at that. 3-1 Nationals on LaRoche's 17th. Measure that one. Danny Espinosa singled in the next at bat, Roger Bernadina reached first safely on a swinging bunt and both runners scored when Jesus Flores lined to left for the third-straight two-out hit and Mets' left fielder Jason Bay sailed a throw way over home allowing two runs to score. 5-1 Nationals after five and a half.

• More Gio Goodness: Gio Gonzalez surrendered his first walk of the game to Andres Torres with two outs in the Mets' sixth. Daniel Murphy's grounder back to the mound ended a 16-pitch frame, after which Gio was at 68 pitches overall, up 5-1 after six innings in Citi Field in which he allowed just one hit. Bryce Harper was 0 for 4 tonight, but he avoided the Golden Sombrero when he lined out to second with one down in his fourth at bat in the sixth. Ryan Zimmerman singled off Mets' reliever Manny Acosta with two down, but a groundout to short by Michael Morse ended the top of the seventh with the score still 5-1 Nats.

• Zim. Keeps. Hitting: Ryan Zimmerman singled with two down in the Nationals' seventh, hitting in his third of four at bats tonight in New York. Manny Acosta got a groundout from Michael Morse to end the top of the frame. Nats' skipper Davey Johnson sent Gio Gonzalez came back out for the seventh. The Nationals' left-hander surrendered a two-out single by Ike Davis and a two-out walk to Jason Bay before retiring Ronny Cedeno on a groundout to short that ended a 19-pitch inning with Gio Gonzalez at 87 pitches overall.

• Gio's Done: Adam LaRoche singled off Mets' lefty Josh Edgin to start the eighth, then took second on a Roger Bernadina line drive to right that Scott Hairston couldn't catch. Both runners were stranded, however, when Edgin struck Jesus Flores and pinch hitter Tyler Moore out to end the top of the eighth...

• FIREWORKS!!: Ryan Mattheus took over for Gonzalez in the eighth, but stayed around just long enough to give up a solo blast by Mets' pinch hitter Jordany Valdespin, who set a Mets' team record with his 5th pinch hit home run of the season. 5-2 game on Valdespin's 7th overall. Davey Johnson went to Sean Burnett at that point, who retired the next three Mets in order to keep it a three-run lead at 5-2 Nats.

• Clipp'd: Ramon Ramirez let Bryce Harper on for the first time tonight, walking the Nats' outfielder with down and allowing him to avoid strikeout no. 4 on the night. Harper got caught stealing for out no.2 of the Nats' ninth. Ryan Zimmerman's grounder to Ike Davis ended the top of the ninth with the score still 5-2 Nationals. Tyler Clippard came on for the bottom of the ninth, looking for his 17th save of 2012. A win and the Nationals would hand R.A. Dickey his first loss since April 18th in Atlanta. David Wright K'd swinging. ONE!!! Scott Hairston K'd looking! TWO!! Ike Davis grounded back to the mound to end it. 5th straight loss for NY. R.A. Dickey takes the loss. Nats take first two in New York. 5-2 final. 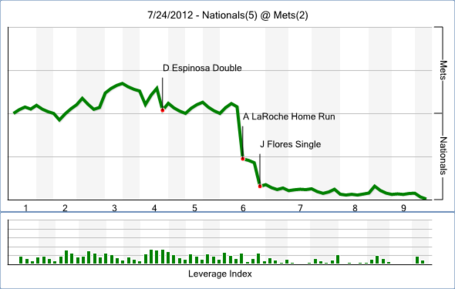