• Gio And Stras: Washington Nationals' starter Gio Gonzalez got hit hard, giving up six hits, three walks and six runs when he faced New York in Washington last week, but last night in Citi Field the 26-year-old left-hander was dominant. Gonzalez held the Mets to a run (which was unearned) on two hits in seven innings in which he walked two and K'd four. "What we saw today is what Gio Gonzalez did for most of the season to win 12 games and make the All-Star team," NY skipper Terry Collins told reporters last night on SNY, "Five days ago was not his day. So we knew we had our work cut out for us." The Mets had their work cut out for them in the series finale this afternoon too.

Stephen Strasburg threw five scoreless in his last start against Atlanta, but the Braves got to the right-hander in the sixth, scoring two runs on a HR by Brian McCann with Strasburg on the mound and two more on a two-run double by Martin Prado when Michael Gonzalez let the two batters Strasburg put on before leaving the game after 5.1 IP score to turn a 9-0 blowout into a 9-4 game. The Braves ended up winning 11-10 in extra innings that night. Asked what the Mets would have have to do today to beat the Nats' 24-year-old right-hander, Terry Collins told SNY this morning that he would stack the lineup with lefties and see how it goes.

"One of the things that our reports have told us is that in recent starts, his last three starts, lefties have hit him pretty good," Collins said, "So I wanted to get our left-handed bats in there today, which is one of our strengths anyway. But if he's on? I don't care where you hit. He's tough. He's real, real tough." He was on and he was tough. Strasburg threw a 96 mph 0-2 fastball by Ruben Tejada for a swinging K in the first at bat of the bottom of the first today. A 96 mph 0-1 heater to Jordany Valdespin got Strasburg a groundout to short and a 1-2 four-seamer to David Wright got the Nats' right-hander a called strike three, K no.2 and out no. 3 in a nine-pitch frame. 0-0 after one in Citi Field.

• Back-to-Back: Michael Morse started the second with an opposite field blast to right over the Wheat Thins sign on the right field wall. HR no. 7 of the year for the Nats' 30-year-old slugger, 1-0 Nationals in the second. 10 pitches later it was 2-0 Washington after Danny Espinosa took a 90 mph full-count fastball from the Mets' Jeremy Hefner to right and into the upper deck or the Pepsi Porch as it's called in Citi Field for his ninth home run of 2012. 2-0 Nats after one and a half...

• Collins Points To Head: Left-handed hitting Mets' first baseman Ike Davis took a first-pitch fastball to right to cut the Nats' lead in half with a home run on the tenth pitch Stephen Strasburg threw this afternoon. Left-handed-hitting second baseman Daniel Murphy singled to right on the second pitch of the inning, but the Nats' right-handed starter got a double play grounder out of Kirk Nieuwenhuis for a 4-6-3 DP and the first two outs of an 11-pitch inning that ended when Josh Thole grounded out to third. 2-1 Nats.

• E:4, 5-Hole: Daniel Murphy had a chance to turn a double play in the top of the third, but a sharp grounder by Bryce Harper skipped through his legs, allowing Steve Lombardozzi to take second after he'd singled to start the frame. Ryan Zimmerman stepped in with two on and popped to short right for out no.1. Lombardozzi got thrown out trying to take third on a ball that got by Josh Thole when Lombo came off the bag after sliding in safely and got tagged by an attentive David Wright. LaRoche K'd looking in the next at bat and a potential rally was wasted.

• Sit, Sit, Sit, Down, Down, Down: An 88 mph change to Andres Torres got Stephen Strasburg the first out of the Mets' third and his 3rd K in 2.1 IP. A 96 mph 3-2 fastball to the opposing pitcher got a called strike three and K no.4 on the eighth pitch of the at bat. Strasburg needed just three more pitches, a 97 mph four-seamer, an 80 mph curve and an 89 mph change to complete a 15-pitch frame in which he struck out the side with Ruben Tejada swinging through the changeup to end the inning with the Nats' starter at 35 pitches overall. K No. 5 in 3.0 IP. Still 2-1 Nats.

• Double No. 26: Danny Espinosa doubled to left to start the fourth after homering in his first at bat and then scored from third on a Sandy Leon grounder to first after a Roger Bernadina singled had moved him up. The Mets' Ike Davis threw home on Leon's grounder, but Josh Thole lost the ball at the end of a sweeping tag attempt and home plate umpire Jim Wolf ruled that Espinosa was safe. 3-1 Nationals. Jordany Valdespin K'd swinging at a 2-2 change for the first out of the Mets' fourth. David Wright K'd chasing a 1-2 change into dirt for out no.2, K no. 7 and Strasburg's fifth straight strikeout. Ike Davis, who homered last time up, popped up to end a 12-pitch frame with Strasburg at 47 pitches overall having retired eight batters in a row.

• P2K > P2C: Strasburg covered on a weak groundout to first by Daniel Murphy. Kirk Nieuwenhuis K'd looking at 97 mph full-count fastball. 10-in-a-row set down, but Nationals' left fielder Michael Morse misjudged a fly to left by Josh Thole and lets it bounce over the wall for a ground-rule double and New York's first hit off Stephen Strasburg since the second. Four pitches later Andres Torres flies to right, however, and Strasburg's threw five innings on 68 pitches after a 21-pitch frame. Still 3-1 Nationals.

• 6.0 IP, 10 K's, 84 P: Roger Bernadina walked with two down in the Nats' sixth after Jeremy Hefner threw one behind the Shark's head early in the at bat. Sandy Leon took the second of back-to-back walks in front of Stephen Strasburg, but the pitcher K'd swinging to end the top of the sixth. Ronny Cedeno K'd swinging at a high fastball inside for K no.9 of the game and out no.1 of the Mets' sixth. Ruben Tejada flew to right for out no.2, and David Wright K'd looking at a full-count curve for K no.10 on pitch no. 84 of the game by Strasburg. 3-1 Nationals after six.

• LaRoche Does It Again: Bryce Harper walked with one down in the Nats' seventh, then scored on Adam LaRoche's 18th HR of 2012. The Nationals' first baseman took a 2-2 four-seamer to right for a two-out, two-run home run and a 5-1 Nationals' lead. Mets' lefty Tim Byrdak left the game here. Former Nationals' closer Jon Rauch came on to retire Michael Morse and end the top of the seventh. Ike Davis grounded out to start Mets' seventh. Daniel Murphy pushed Bryce Harper back to the track in right field where Harper caught out no.2. Kirk Nieuwenhuis K'd swinging to end the inning after 10 pitches with the right-hander at 94 pitches overall.

• Davey Gives H-Rod Shot: Mets' right-hander Elvin Ramirez gave up a two-out walk to Nats' catcher Sandy Leon, but the reliever completed a scoreless frame. Henry "Lightning" Rodriguez took over in the bottom of the eighth and walked the first batter he faced, Mets' catcher Josh Thole. Rodriguez went to a full count and walked Andres Torres to put two runners on. That was it for Henry. Craig Stammen came on to face Scott Hairston and walked him to load the bases. Ruben Tejada lined to center for out no.1 and a charging Shark held the runners in place. Sean Burnett came on to face Jordan Valdespin, who grounded out to first, but got a run in. 5-2. Drew Storen vs David Wright with two on and two out. Wright 0 for 3 w/ 3 K's today. And he's 0 for 4 after he grounds out to third. 5-2 game.

• Clipp'd: After Elvin Ramirez threw another scoreless inning in relief, Tyler Clippard came on looking for save no. 18 of 2012. Ike Davis K'd swinging at a fastball outside. ONE!!! Daniel Murphy flew to center! TWO!!! Justin Turner

• Doghouse's Post Game WPA Graph: "Game 97: And here I was worried Stras was getting tired...": 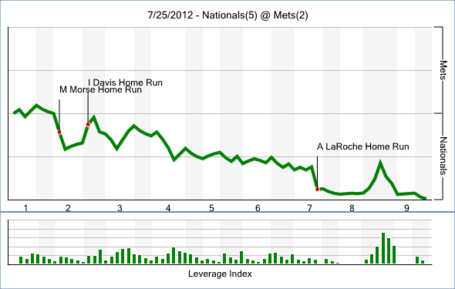